Top data management trends among companies that succeed with analytics

In my analytics capstone course as ASU, I talk about my Mount Rushmore of data-driven companies. In no particular order, they are Amazon, Facebook, Google and Netflix. In this post, I'll shine a light on their data management practices. (TLDR: Because they manage their data so well, they are able to excel at analytics.)

Economics is the study of scarcity. This means many things, not the least of which is that there's only so much bandwidth an organization and its employees can have. Allow me to posit a vastly oversimplified view of organizational data: The more time that employees and enterprises spend managing their data, the less time (and energy) they possess for analytics. Call it Simon's First Law of Data Management: 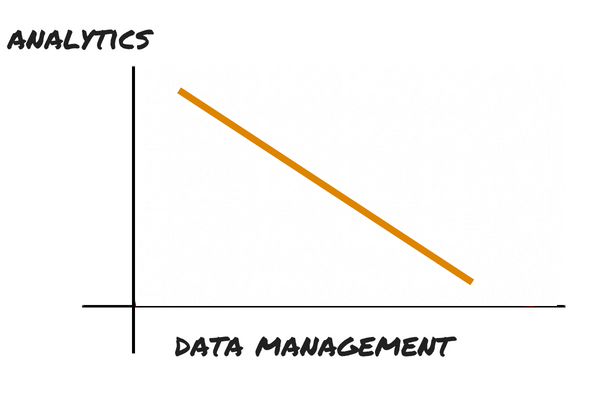 But isn't data management largely manual and time consuming? Not all companies excel in this regard. Think about how Amazon allows vendors, publishers, authors, partners and customers to largely manage a great deal of their own data. (Yes, I'm talking here about self-service.)

They have largely reduced and minimized system complexity

Running an enterprise as large as Amazon is no small feat and only a select few know the inner workings of its most essential systems. Still, the company took major steps in 2005 and 2006 to simplify its internal IT. By embracing DevOps and microservices, the company concurrently decreased its error rate and increased its stability. No, more effective data management per se was not the goal at the time, but it's a nice side product. For reasons such as these, employees there don't need to fumble about. They can immediately get to the good stuff.

A tech executive from Amazon recently spoke with some ASU faculty members about her company's recruiting needs. During that meeting, the woman said, "Do you think that we manage Amazon via spreadsheets?"

They have embraced speed and automation

We're spoiled today. We can stop a movie on one device and seamlessly pick it up on another.

Imagine stopping a movie for ten minutes and waiting four hours for the service to "remember" where you were. Most of us would become enraged. Ditto for adding a product on Amazon Seller Central and not seeing it until tomorrow (after some back-end ETL job ran).

Companies that succeed with analytics aren't afraid to stop work on executives' pet projects when the numbers simply don't warrant continuing them. I can think of no better example here than Netflix. The Verge ran a long piece called Inside the Binge Factory that illustrates this point.

But how would someone even know that the squeeze or a particular project – in this case, an executive's favorite series – is or isn't worth the juice? You guessed it: data management. Netflix didn't need to spend weeks gathering data to make a decision; it's available – always and to whoever needs it.

Simon says: Learn from the companies hitting it out of the park.