During the year 2020, many countries and areas will be conducting their decennial census, and making projections to estimate what their population will be in the future. Therefore I decided to dust off one of my old SAS/Graph samples based on the 2010 census, and rewrite it using more modern technology. That way, I will be ready to plot new data and forecasts based on the 2020 census, when that information becomes available. Follow along, and learn a few tips about plotting population projections!

So let's get started! ... First some background. Back ~10 years ago, the UN had a web page where you could select a country, and see a graph of the population projection out to the year 2100. They had two shaded areas around the projection - one for the 80% confidence interval, and one for the 95%. It's an informative graph, but a little crowded/cluttered for my preferences. Their list of countries was alphabetical, and Afghanistan came up first in their list - here's the Afghanistan graph:

I downloaded their spreadsheet, imported the data into SAS, and was able to produce a basic graph of the population projection with the following minimal code. 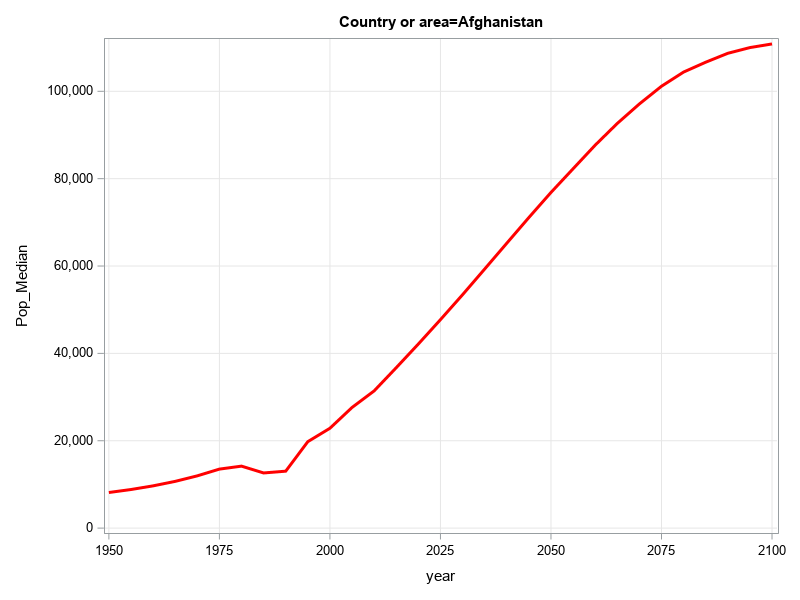 Now, let's add the shaded area for the 95% confidence interval.

With the older SAS/Graph software, you could shade the area under a line (but not the area between two lines). And therefore to get the appearance of a shaded confidence interval, you had to play some tricks with your code. By comparison, with SAS's newer ODS Graphics software, this functionality is built-in. In SGplot, that's a simple matter of adding a band statement, and specifying which variable in the dataset represents the upper and lower edge of the band. 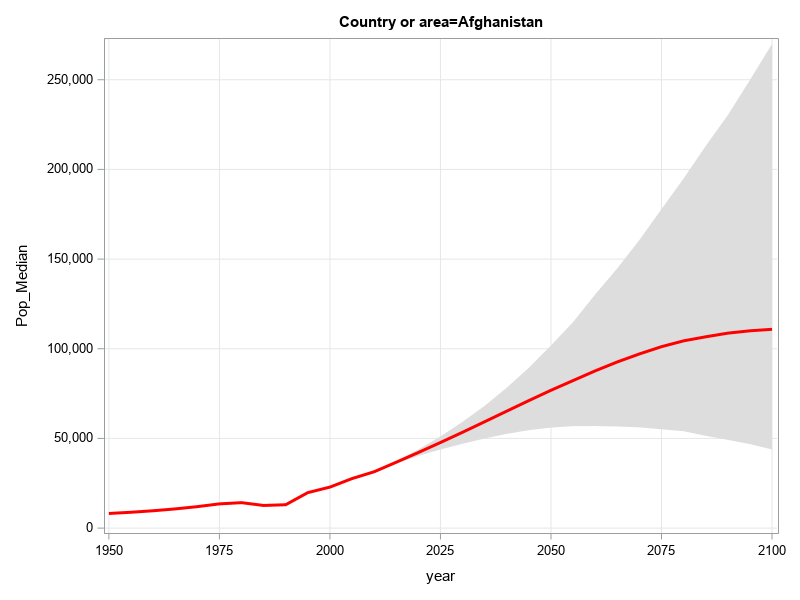 Next, let's add a darker gray area for the 80% confidence interval. 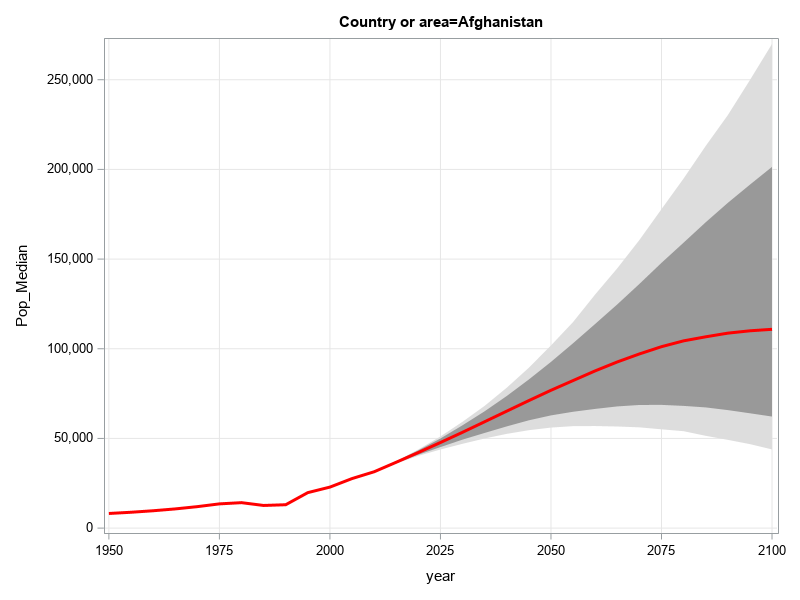 Transparent Shading Can Be Deceptive!

For most people, the graph above would be fine, and you'd be finished (with some fairly simple code!) 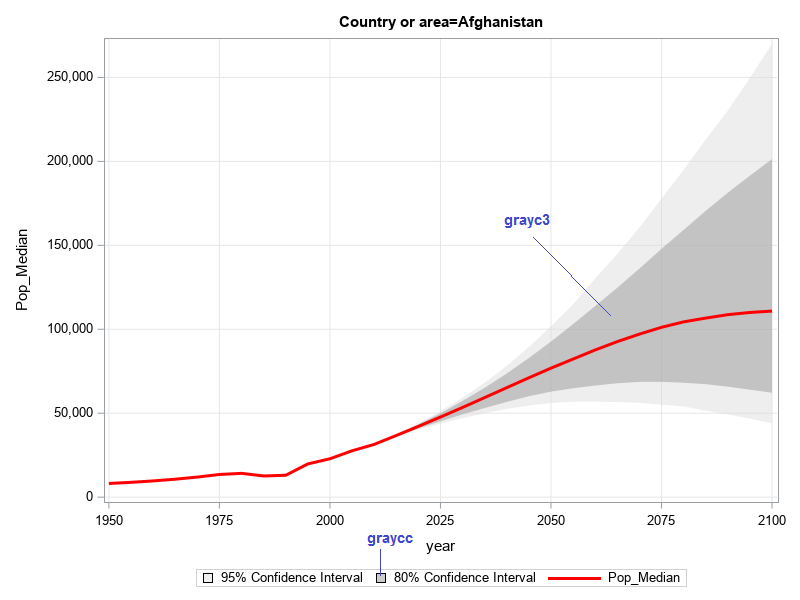 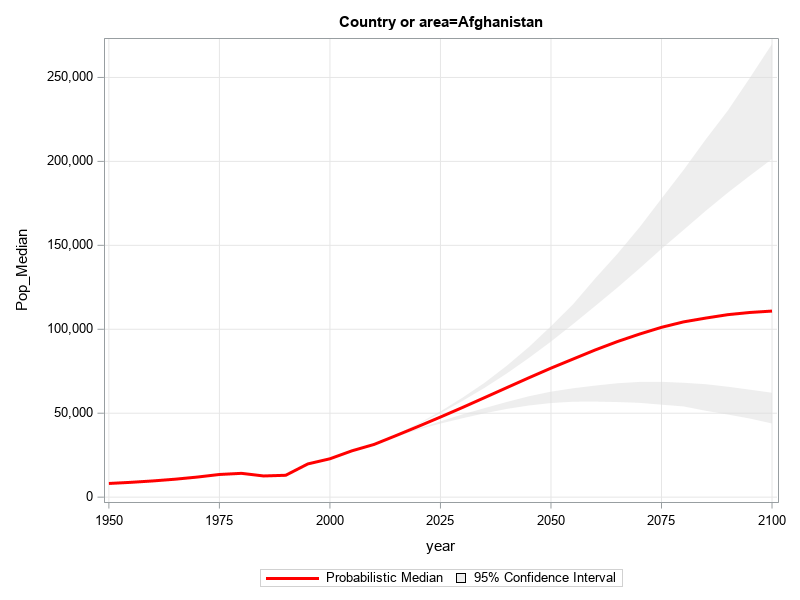 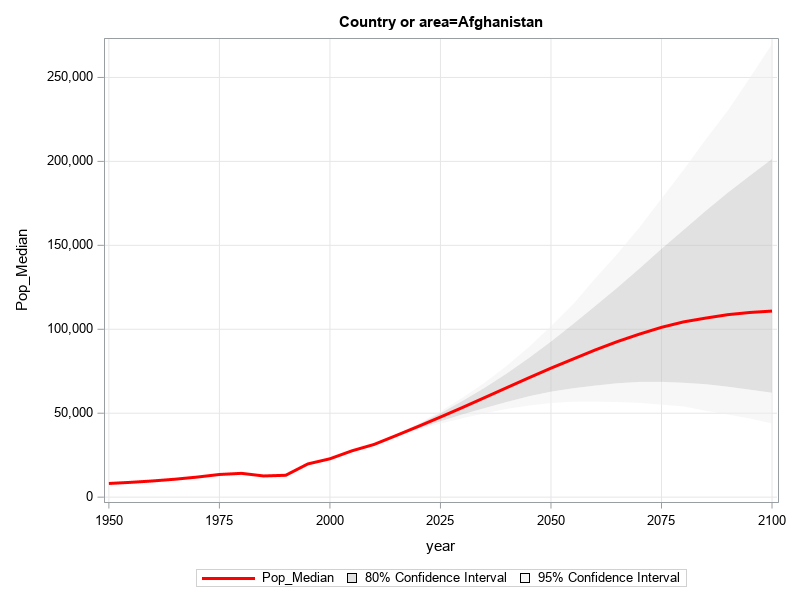 Now that we've got the basic plot worked out, let's add a few finishing touches! There's quite a bit of code below, but I wanted to show you the difference in the amount of effort required to produce a really nice plot (below), and a plot that's OK, but not great. In my opinion, it's worth the extra effort - especially when you can write the code once, and produce many different graphs! 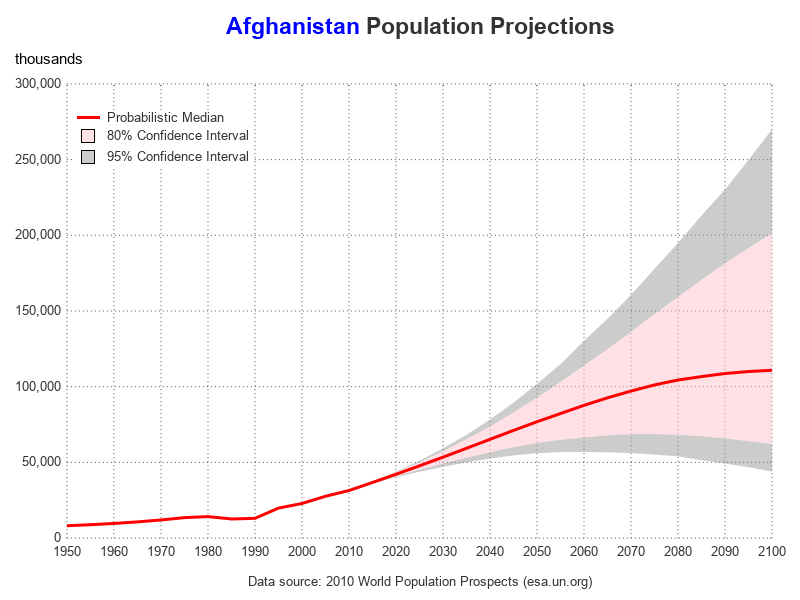 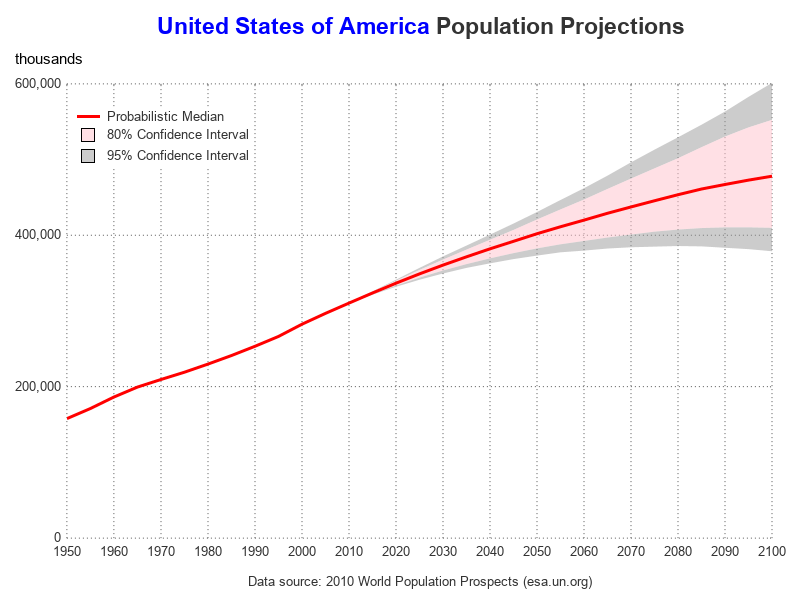 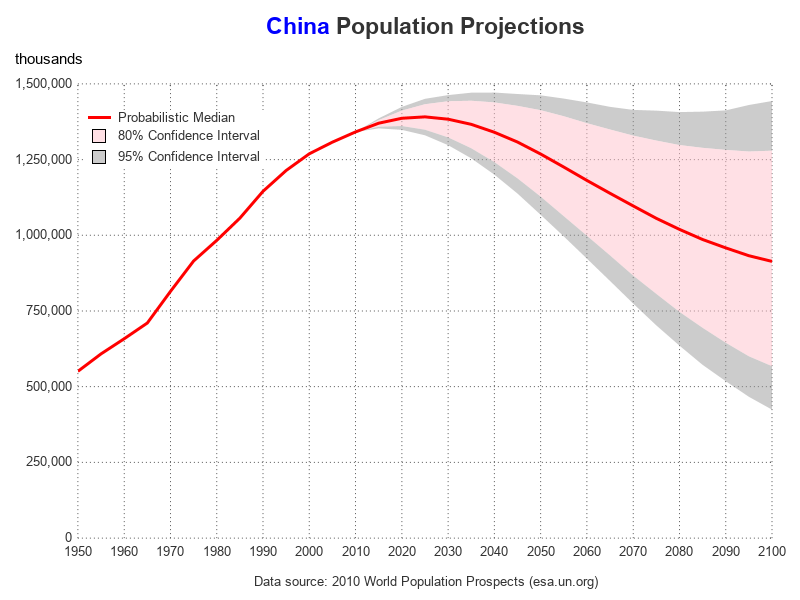 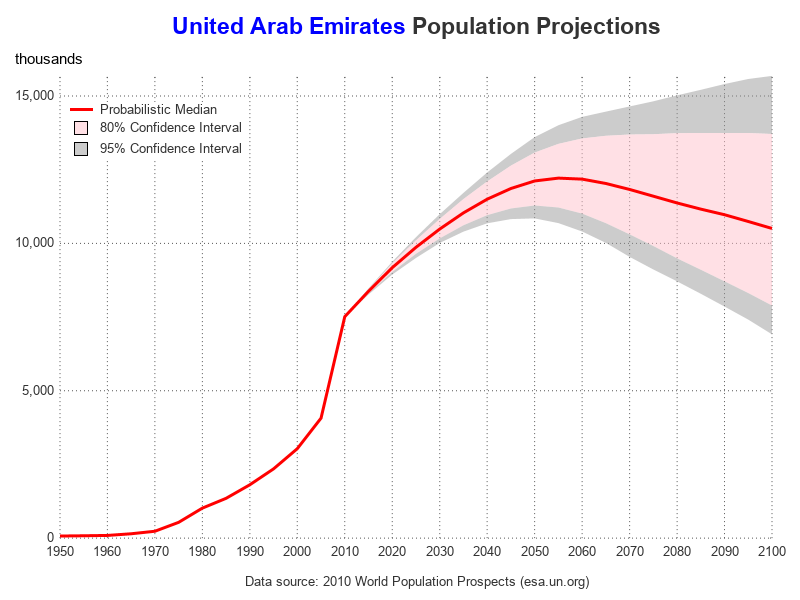 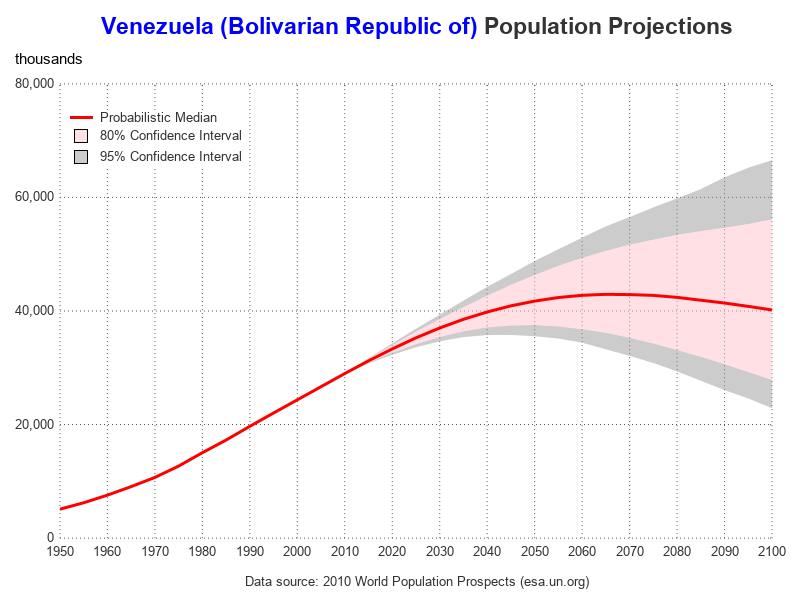 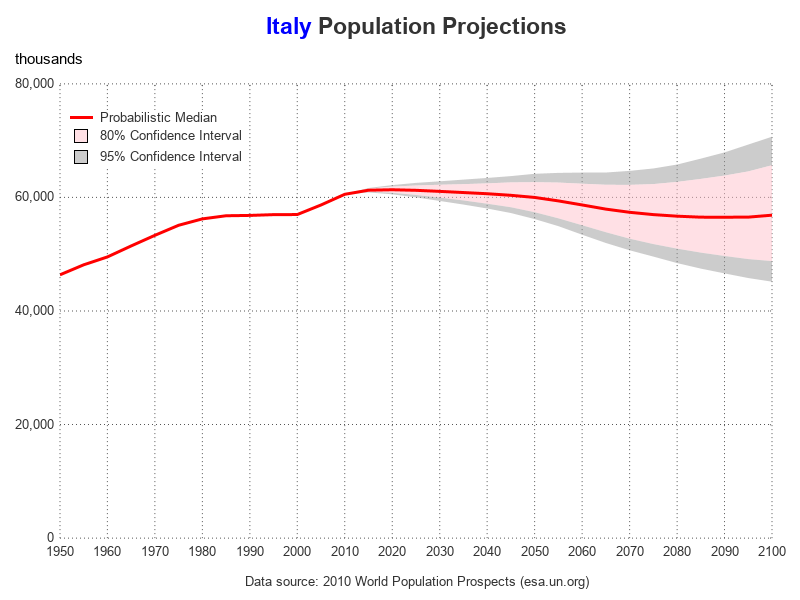 Here's a link to the complete SAS code, in case you want to see all the details.