A SAS customer asked how to use background colors and a dashed line to emphasize the forecast region for a graph that shows a time series model. The task requires the following steps: 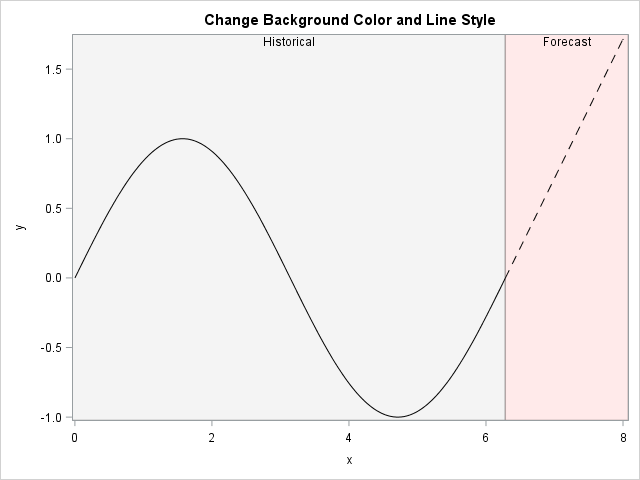 A simple "toy" example is the best way to show the essential features of the desired graph. The following DATA step creates a curve in two regions. For x ≤ 6.28, the curve is a sine curve. For x > 6.28, the curve is linear. These two domains correspond to the "Historical" and "Forecast" levels of the indicator variable BlockID. The graph is shown to the left.

The graph emphasizes the forecast region by using color and a line pattern. The ATTRPRIORITY=NONE option ensures that the line patterns alternate between groups. For details, see Sanjay Matange's article about the interactions between the ATTRPRIORITY= option and the STYLEATTRS statement. For rapidly oscillating models, you might want to use the DOT line pattern instead of the DASH line pattern.

I've previous written about how to use the BLOCK statement to emphasize different regions in the domain of a graph.

Of course, this example is very simplistic. The next section shows how you can apply the ideas to a more realistic example.

Many SAS procedures create suitable graphs when you enable ODS GRAPHICS. In particular, many SAS/ETS procedures (such as PROC ARIMA) can create graphs that look similar to this example. The following classic example is taken from the PROC ARIMA documentation. The data are the log-transformed number of passengers who flew on commercial airlines in the US between 1949 and 1961. Based on these data, the ARMIA model forecasts an additional 24 months of passenger traffic. 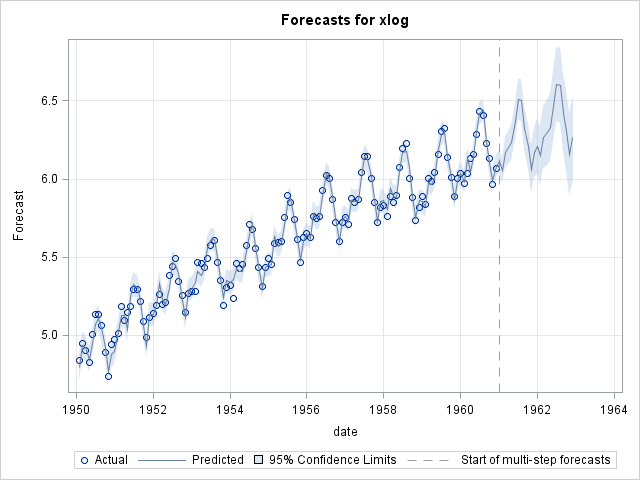 In the previous PROC ARIMA call, I used the OUT= option on the FORECAST statement to create a SAS data set that contains the predicted values and confidence region. The following DATA step adds an indicator variable to the data:

You can now create the modified graph by using the STYLEATTRS, BLOCK, and SERIES statements. In addition, a BAND statement adds the confidence limits for the predicted values. A SCATTER statement adds the data values. The XAXIS and YAXIS values overlay a grid on the graph. 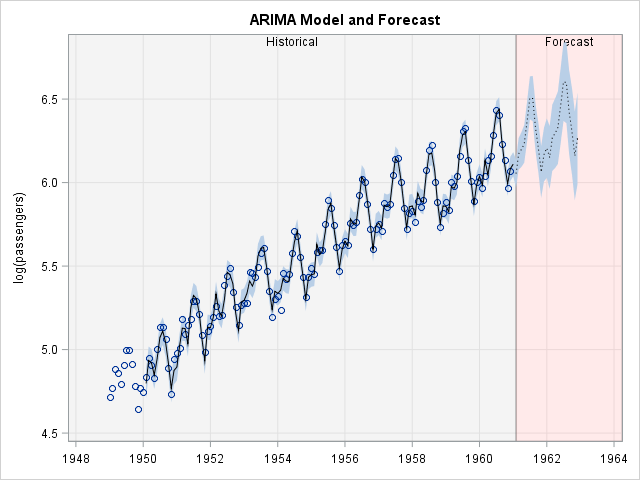 The final graph is a customized version of the default graph that is created by using PROC ARIMA. The presentation highlights the forecast region by using a different background color and a different line style.

If you are content with this one-time modification, then you are done. If you want to create this graph every time that you run PROC ARIMA, read the SAS/STAT chapter "ODS Graphics Template Modification" or read Warren Kuhfeld's paper about how to modify the underlying template to customize the graph every time that the procedure runs.