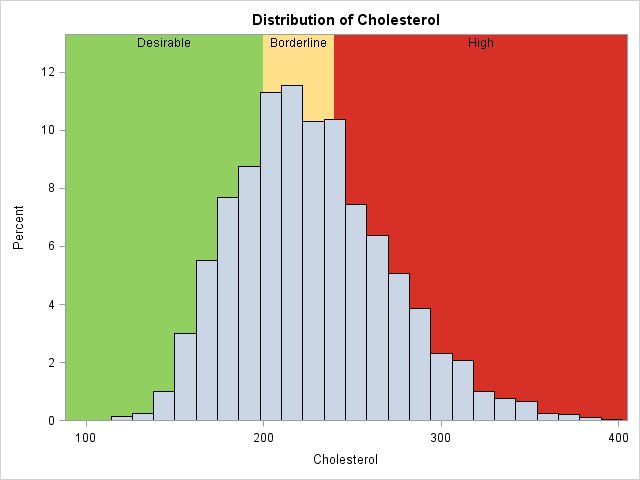 This article discusses a different, but related, issue: overlay a sequence of discrete colored blocks on a histogram. The typical use case is to display categories that are derived from the histogram's variable.

For example, the histogram at the left shows the distribution of cholesterol levels for more than 5,000 patients in the Framingham Heart Study, as recorded in the data set Sashelp.heart. Behind the histogram are three colored regions that indicate three medically significant intervals: desirable levels of cholesterol (less than 200 mg/dL), borderline levels (up to 240 mg/dL), and high levels (240 mg/dL or greater). A sequence of colored blocks (green, yellow, and red) are drawn to visually indicate the cholesterol ranges that are of interest.

This same technique applies to many other examples. For example, you can graph the distribution of student grades and display the intervals for the categories for "A," "B", "C," "D," and "F." Or you can plot the wind speeds of a tropical cyclone and display the Saffir-Simpson categories for wind speed such as "Tropical Depression," "Tropical Storm", "Category 1," and so forth.

Overlay the histogram and block plot

The easiest way to overlay a histogram and block plot is to use the LAYOUT OVERLAY statement in the GTL. If you do not specify any colors, then each regions is colored by using the GraphData1, GraphData2,..., colors of the current ODS style. In most cases you will want to specify the colors by using a sequential or diverging palette of colors. For this example, I have hard-coded the colors to be a traffic-light scheme, which many people use to convey the idea that low values of cholesterol are good (green), intermediate values should cause an alert (yellow), and high values are dangerous (red).

The following GTL statements create a template called BlockHist. The template uses dynamic variables so that at run time you can specify the title and the names of the continuous and block variables. The height of the vertical axis is extended by 10% to make room for the labels of the block variable. If you use this template to display k categories, you should replace the DATACOLORS= option with a color palette that has k colors.

To my eye, the previous graph has too much color. The eye is drawn to the background rather than to the histogram of the data. An alternative design is to display a narrow strip of color underneath the histogram, which is the method used by Pickle et al. The following GTL template uses the INNERMARGIN statement to create a block plot underneath a histogram. Again, you should modify the DATACOLORS= option if your block variable has more than three colors. 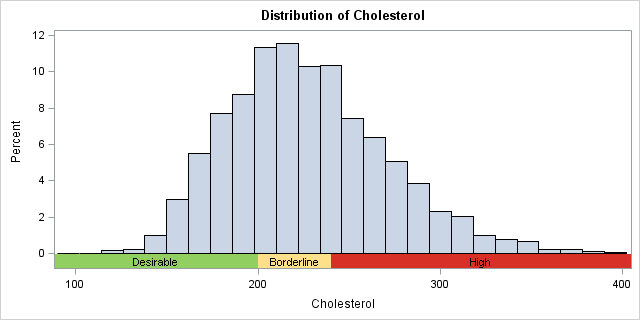 In summary, you can use the BLOCKPLOT statement in the GTL to visualize categories that are derived from a continuous variable. You can create a block plot behind the histogram, or you can display a narrow strip of color below the histogram. In either case, the bars of the block plot indicate intervals of a continuous variable that define discrete medical or scientific categories. You can specify the colors of the block plot by using a sequential or diverging color palette, thereby linking the histogram variable to a heat map or choropleth map that is colored by discrete categories.