We've had record high 90+ degree temperatures here in the southeast US this past week (September / October), and it has made me appreciate having an air conditioner. Indeed, air conditioners were pretty much invented here in North Carolina (see Eric Cramer). They are used in pretty much every building I frequent these days ... but it hasn't always been that way. In my 50+ years, I definitely remember living without - for example, we didn't use the air conditioner often when I was growing up, and didn't have it at all in my high school or my college dorm. Being a data guy, I thought it would be interesting to see how quickly air conditioners (and other technologies) were adopted in the US.

But before we jump into the data analysis, here's a picture to get you into the mood for looking at air conditioner data. This is my good buddy David, servicing the weather station on his roof, to make sure he doesn't miss capturing all this record weather data. Not bad climbing skills for an 'older guy' approaching his 70th birthday, eh!?! (And his roller skating skills are still very much on-point too!) 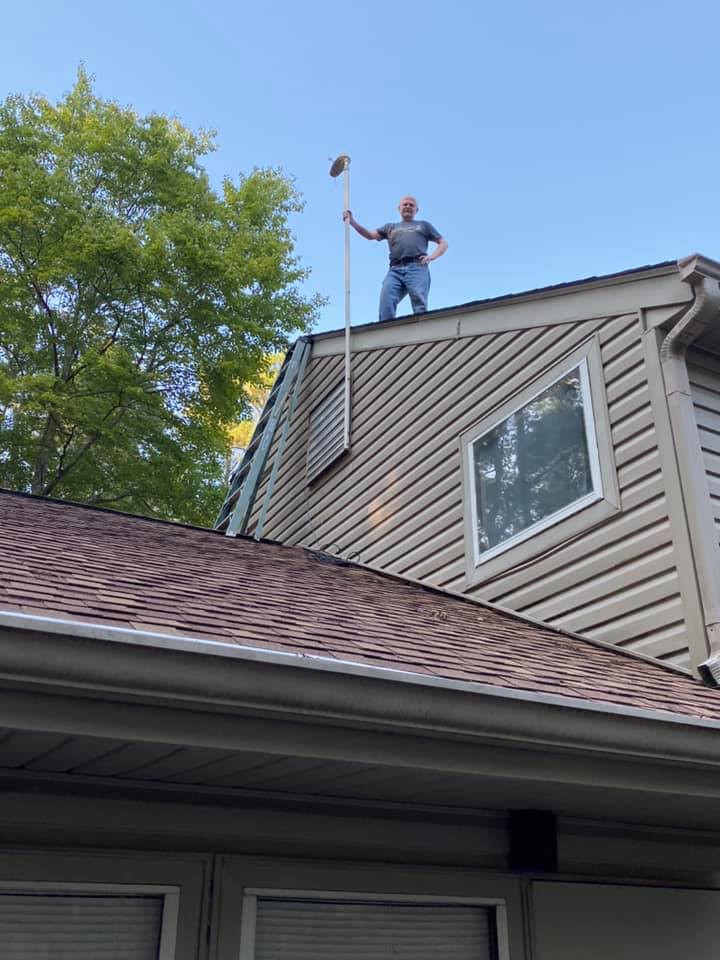 Before I did my own analysis, I looked around the Internet to see what was already out there. The first related graph I found was this one in the Reddit 'dataisbeautiful' group. It showed the adoption rate of various technologies (but unfortunately didn't include air conditioners). The biggest problem visual problem with this graph is probably the jumbled bottom axis. And the graph is a bit tall and scrunched for a time series plot. 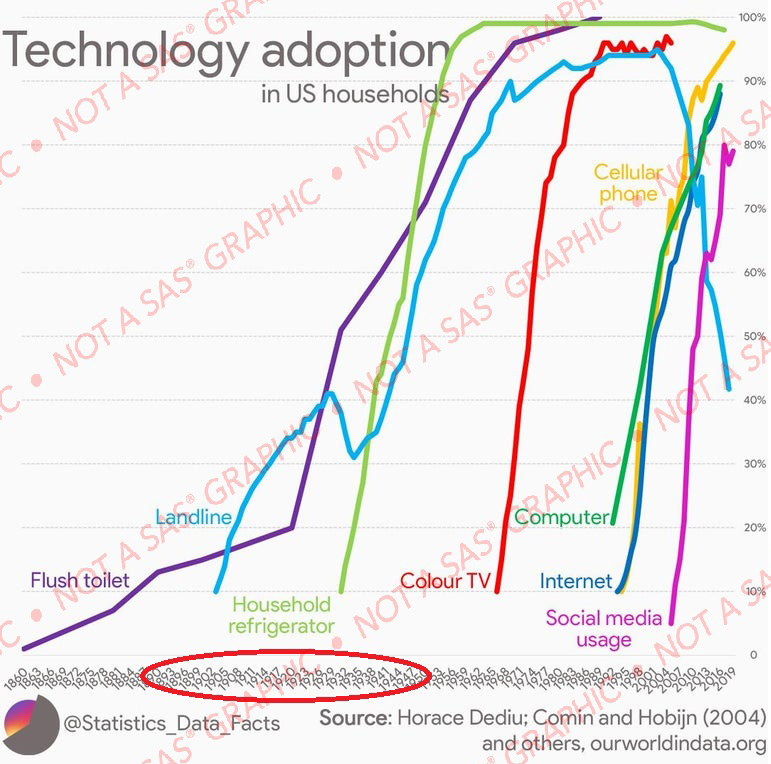 But, the good thing about the graph above is that they cited the data source, and I was able to go to the ourworldindata.org website and find technology adoption data for a plethora of areas ... including air conditioners! Their graph was a bit better than the one on Reddit, and had a bit of interactivity such as mouse-over text (which was a big help). But it was still difficult to tell which line was which. Can you pick out the Home air conditioners line in the graph below? 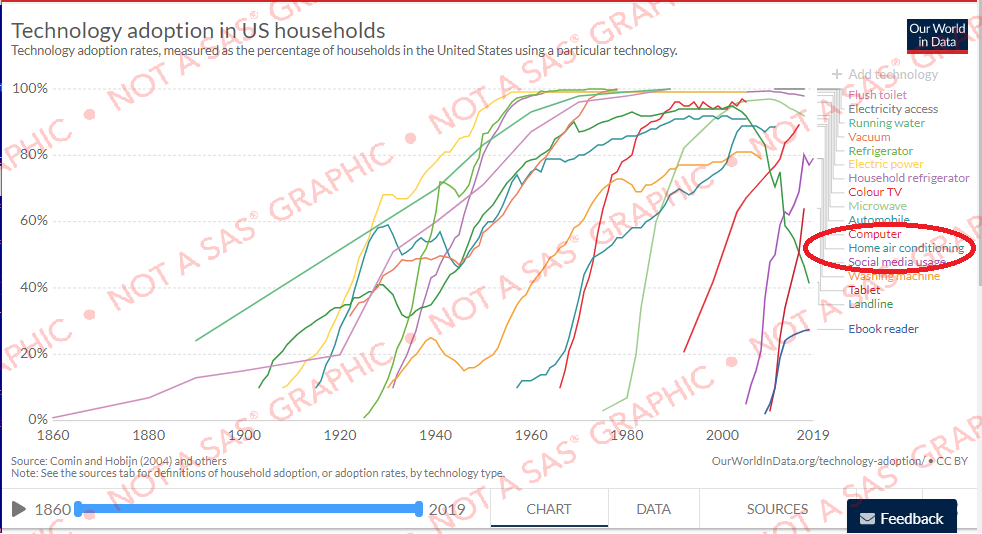 So I downloaded their data csv file, imported it into SAS, and set about creating my own graph. Here are some of the choices I made in my re-design...

And here is my new (hopefully) improved version! 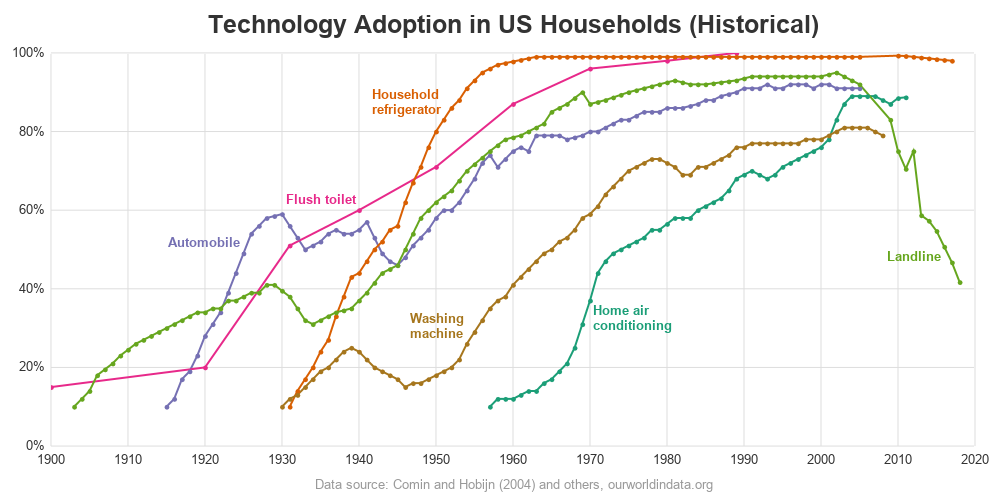 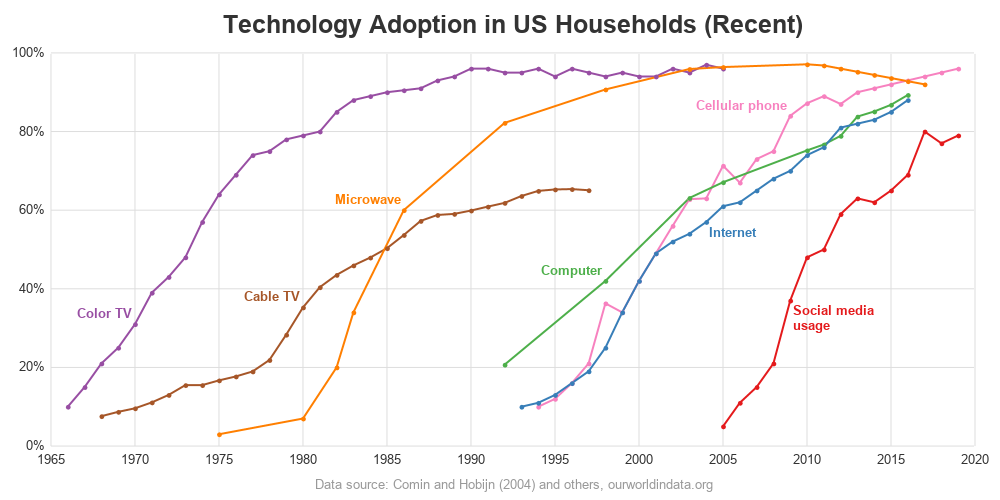 Below is a summary of the coding techniques I used, for those of you who are SAS programmers. If you'd like to see all the details, here's the complete SAS job you can download and experiment with.

For the basic plot, I used a SGplot series to get a line with markers. And I assigned a group= so that each line would have a distinct color:

For the line labels, I had several options. I could have used the series plot's curvelabel option to place a label at the end of each line ... but due to the nature of the data, I didn't really like these automatic labels. I could have also modified my data= dataset to have text values at certain data points, and used a text statement to have them show up on the graph. But I chose to annotate the desired labels. It's a bit of extra work, but I think it was worth it to get the exact labels I wanted at the exact positions I wanted. A well-labeled graph is so much easier for the users to understand!

First, I decided where I wanted the labels, and created a dataset containing the data points closest to those locations (I determined which years the points were at, by looking at the mouse-over text for the plot markers).

I then tweaked my annotate dataset to control the position of the text labels, in relation to the data point. You use the anchor variable to control that.

And since I wanted my text label colors to match the line colors, I assigned each of those manually. This is a bit more work than the curvelabel option or the text plot option, which would have automatically set the colors. But it's a price I was willing to pay.

From the graph, it looks like household air conditioning started being adopted around the 1960s, and peaked at about 90% adoption rate in the 2000s (here in the US). Perhaps many of the remaining 10% of the households are up north, where it doesn't get as hot?

Do you see any interesting or surprising trends in the other technology adoption rates? Is there anything that jumps out at you in the graphs? Feel free to discuss in the comments!