When an election is on the horizon, I always feel compelled to plot some data! And this time I'm plotting North Carolina's voter registration data!

For this graph, I downloaded several of the data snapshots from the NC State Board of Elections' website, and plotted a line showing the number of registered voters in each of NC's main political parties. I chose data snapshots at monthly intervals, basically the earliest snapshot of each month. 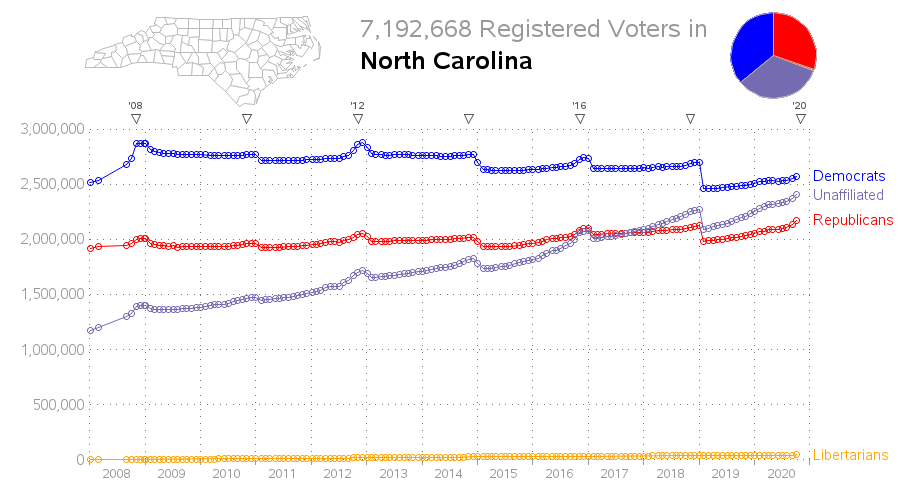 The graph (above) shows that there are more registered Democrats than Republicans in NC, but the numbers are fairly close - with about 1/3 Democrat, 1/3 Republican, and 1/3 Unaffiliated (you can get a feel for that in the pie chart of the most recent values). In the past few months, it appears the Republicans have had a bigger increase in registered voters than the Democrats, but looking at the long-term trend it appears NC will soon have more Unaffiliated voters than either Democrats or Republicans.

You might also notice a decrease in the number of registered voters at certain points in time. These dips show when they clean up the voter rolls and 'unregister' people who haven't voted or responded in many years, etc. Note that I added little triangles above the graph to show when the elections took place (I added the 2-digit year above the triangles for the presidential elections).

Viewing the state level graph is interesting, but there's another level of detail available - this data actually goes down to the county level. Therefore I set up an interactive version of the graph, so you can click on the counties in the little map at the top/left of the graph and it will drill-down and show you a graph for that county. Or, if you prefer, you can scroll up/down on the page to see all the counties. For example, here's the graph for Rowan county, where I grew up and first registered to vote many years ago: 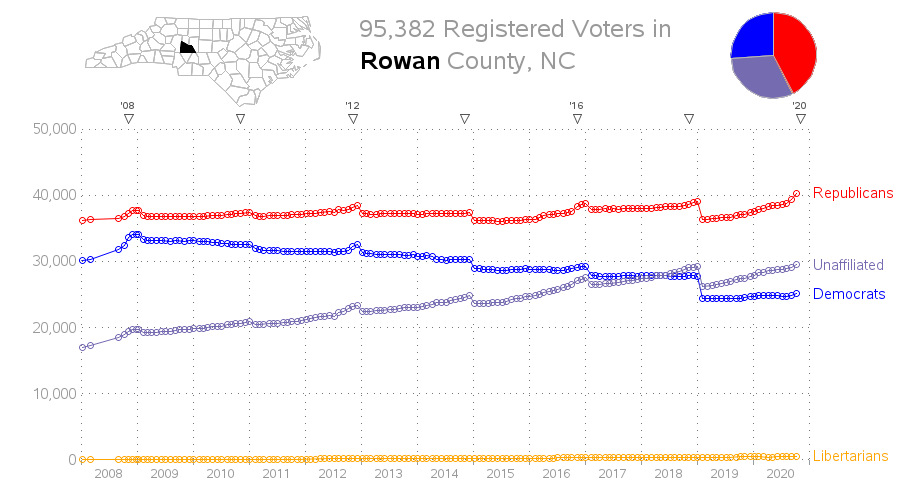 Rather than adding images of all 100 county graphs in the blog here, I have set up an online/interactive version, which I invite you to try!

Do these graphs show anything important? Of course, the "elephant in the room" (or should I say donkey in this case?) is that the counties with the big population centers (such as Mecklenburg and Wake) have way more Democrats than Republicans. And the number of Republicans seems to be holding steady, while the number of Democrats and Unaffiliated in those counties are growing. (I suppose a good question would be whether the Unaffiliated lean Democrat or Republican - since the elections are secret ballot, there's no way to know for sure.)

One of the things I find interesting in the county graphs is when the parties 'flip'. During the time period covered in the graphs (2008-2020), the following 20 of NC's 100 counties have flipped from more Democrats to more Republicans: Alleghany, Brunswick, Burke, Camden, Cleveland, Craven, Currituck, Dare, Harnett, Haywood, Johnston, McDowell, New Hanover, Onslow, Pamlico, Pender, Rockingham, Rutherford, Surry, and Yancey (Beaufort and Sampson look like they will flip soon). Here's Camden, for example: 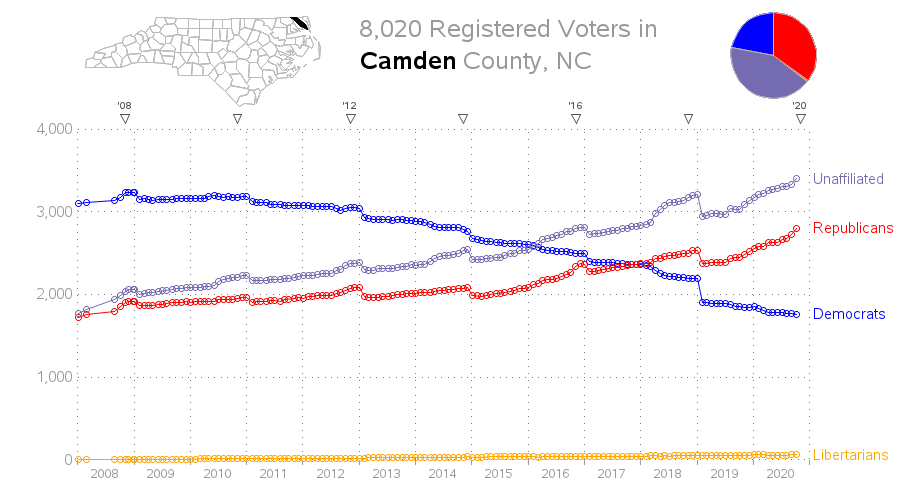 I also find it interesting how there are more 'Unaffiliated' voters than either Democrats or Republicans, in the following 17 counties: Buncombe, Camden, Chatham, Currituck, Dare, Haywood, Henderson, Jackson, Madison, New Hanover, Onslow, Perquimans, Polk, Swain, Transylvania, Wake, and Watauga. (See Camden in the graph above.)

Another observation - the cleanup of the voter registration data right after the 2018 election seems to have been more thorough than after the previous elections, because there was a bigger drop in the numbers.

What things do you find interesting in these graphs? Feel free to leave a comment - but please be civil (inflammatory or partisan comments will be deleted!)

For the SAS programmers out there who might want to create similar graphs, here's some information on how I did it. The following marked-up graph shows the terminology I'll be using in the explanation below, and here's a link to the full sas code. 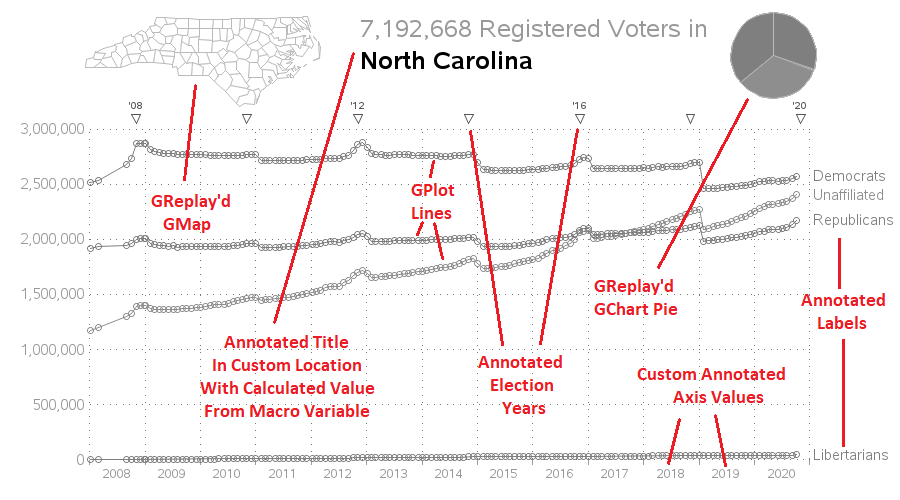