In reference to a previous article on Violin Plots, a reader asked about creating comparative mirrored histograms to compare propensity scores.  While I had my own understanding of "Mirrored Histograms", I also looked this up on the web.  Google showed many cases of two histograms back to back, either horizontally or vertically.  Given these examples, this needed more than a simple reply.  This deserved an article by itself.

I created two graphs, one for each case, assuming the data has two columns.  I used the sashelp.cars and sashelp.heart data sets.  Click on the graphs for higher resolution images. 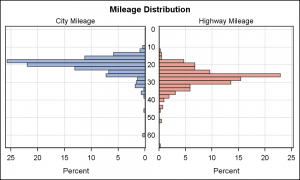 To create this graph, we use GTL to create a 2-cell graph using LAYOUT LATTICE.  Full code is included in the attached file.  The key steps are as follows: 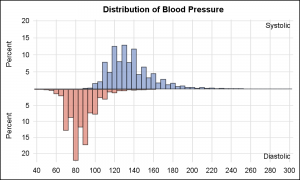 This graph is also created using GTL LAYOUT LATTICE, with two rows.  As mentioned above, one Layout Overlay is added to each cell, and the Y axis for the 2nd cell is reversed.  Other options are set to create the histogram above.

In both these cases, the mirrored layout creates an interesting graph, but it is really not very easy to compare the heights of the bins as they are on reverse sides of the mirror.  Also, only two variables can be compared this way.

Maybe a better way is to use overlaid histograms.  Here are some examples: 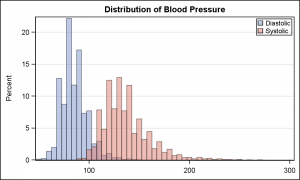 This is a single-cell graph and can be created using the SGPLOT procedure.  Note, the two histograms are made partially transparent to allow visibility of both.  The bin start and intervals are equalized.

In my opinion, comparison of the two histograms is much easier in this case, the shapes can be seen clearly, and the heights of the bins can be easily compared.  Also, the code is very simple.

Another benefit is that this technique can easily be extended to multiple variables.   In the example below I created a data set with three variables for comparison.  Kernel density plots are added.  Click on graph for high resolution image. 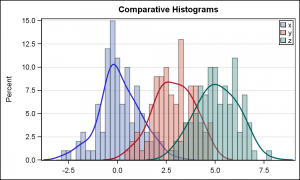 Here is a link to a previous article on Comparative Density Plots.