Recently a user posted a question on the SAS/GRAPH and ODS Graphics Communities page on how to plot the normal density curves for two classification levels in the same graph.

We have often seen examples of a  distribution plot of one variable using a histogram with normal and kernel density curves.  Here is a simple example: To compare the distribution by a classifier in the same graph, you can do something similar as long as the classified data is transformed into a multi-column format.  Now, you can overlay two (or more) density curves of different variables in the same way.

In the example below, we have transformed the data for sashelp.cars into a multi-column format  using the code suggested by Rick Wicklin in his article Reshape data so that each category becomes a variable.   The values of MPG_CITY for the three levels of the Origin variable are transformed into three indepenent columns.  Then, we have used three density statements to plot the data in one graph.  Here is the graph and the code snippet.  Full program is included at the bottom. 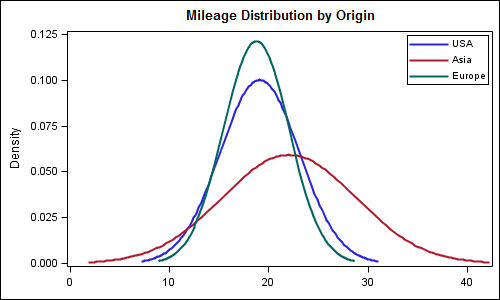 We can take this idea further, and create a plot to see the distribution of multiple variables on the same graph using histograms and / or density plots.  Here is an example of systolic and diastolic blood pressure from sashelp.heart.  We have set a transparency level for each plot to be able to see the data: 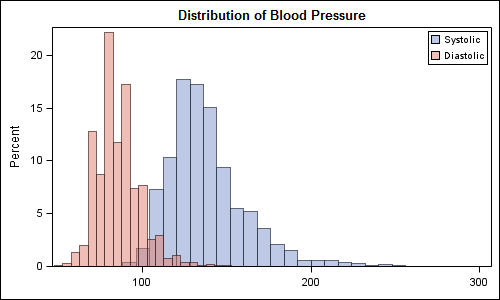 SAS 9.3:  With SAS 9.3, you can set the binwidth for the histograms to get a better comparative graph: 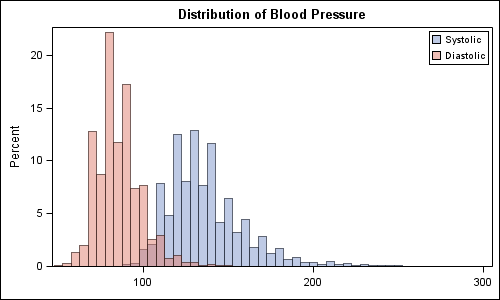