Who says machine learning can't be fun? A crew of us from SAS went to San Francisco for the recent KDD conference, which bills itself as "a premier interdisciplinary conference, [which]brings together researchers and practitioners from data science, data mining, knowledge discovery, large-scale data analytics, and big data." We brought these buttons with us, and they were a huge hit! 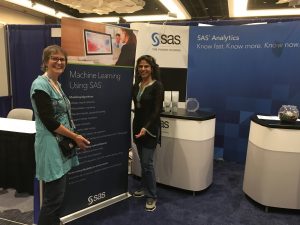 Polly and Simran setting up the booth

But we weren't at KDD just to have fun, of course. We came to learn and share, in our booth and in many other ways. Simran Bagga came to talk about all things text analytics, and she was nice enough to pitch in and help me set up the booth. Naturally, her favorite button was "I'm Feeling Unstructured Today." She gave two extended demos in the booth: "Combining Structured and Unstructured Data for Predictive Modeling Using SAS® Text Miner" and "Topic Identification and Document Categorizing Using SAS® Contextual Analysis."

Wayne Thompson served as a senior editor on the Review Board, which means he oversaw a group if volunteers who had the hard task of reviewing and making selections from the many excellent papers submitted for the Applied Data Science track. He was also was a panelist in a "Special Session on Standards in Predictive Analytics In the Era of Big and Fast Data." His favorite button was "Talk Data to Me," which he did during his panel, "Internet of Things, Industrial Internet, and Instrumented Environments: the Furious Need for Standards." He also gave an extended demo in the SAS booth on "Machine Learning on the Go." 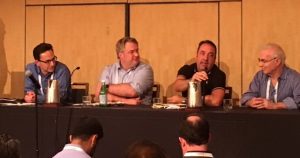 Udo is third from left on this panel

"Can Tools Effectively Unleash the Power of Big Data?" Udo Sglavo thinks so, and he said as much in this panel he was part of in the Applied Data Science Invited Talks track. As someone who has been involved in data mining for many years, Udo's favorite button was "I Support Vector Machines." This button was popular, because it was also Wei Xiao's favorite. He was busy attending many sessions, but he did give his own extended demo in the booth on "A Probabilistic Machine Learning Approach to Detect Industrial Plant Fault." 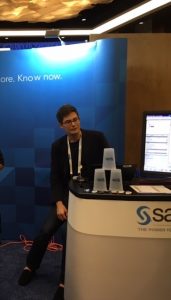 Patrick in the booth

Susan Haller, who leads teams responsible for data mining and machine learning at SAS, had a different favorite button: "How Random are Your Forests?” Ray Wright on Susan's team's favorite was "You Can Engineer My Features." Ray is interested in automation, too, which was the subject of his extended demo: "Modeling Automation With SAS® Enterprise Miner™ and SAS® Factory Miner." But Ray also focused on basketball, giving a poster in the Large Scale Sports Analytics Workshop on "Shot Recommender System for NBA Coaches," which he co-authored with Ilknur Kaynar Kabul and Jorge Silva. Jorge didn't attend the conference, but Ilknur did, and her favorite button was "I'm Having a Cold Start Today." However, Ilknur was not having a cold start when she presented her extended demo: "Auto-Tuning Your Decision Tree, Random Forest and Neural Networks Models." Another member of Susan's team, Patrick Hall, spent a lot of time in the SAS booth, where he was great at answering all kinds of questions. However, he couldn't decide on his favorite button, because it was a tie between "I’m Feeling Unstructured Today” and “I Support Vector Machines.” Patrick answered a lot of questions on options for integrating open source software with SAS, and this was the topic of his extended demo: "Options for Open Source Integration in SAS® Enterprise Miner™." Also on Susan's team, Taiping He, liked: "I'm Feeling Unstructured Today," which may be a surprise, because his extended demo was: "Distributed Support Vector Machines in SAS® Viya™ System." Guess who develops our SVM procedure in SAS Enterprise Miner?

Scott with a smile on his face, as usual

KDD has a nice balance of practitioners and academics in attendance, so we were glad to interact with both groups. We met many students and professors in the booth, and Scott MacConnell was on hand from our Academic Outreach and Collaborations group to talk about all the great free resources SAS has to offer academics. Scott's favorite button was "I Am Feeling Unstructured Today." 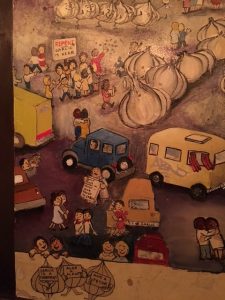 Mural from the wall of the Stinking Rose restaurant

We made time for fun, too, and one night many of us ate dinner together at a restaurant called The Stinking Rose, which calls itself "A garlic restaurant." They had fun murals on the wall showing garlic in all kinds of ways you never even dreamed of! I had the Forty Clove Garlic Chicken, and even though I didn't eat anywhere near that number they provided, I do hope my choice didn't depress traffic in the booth. The food was delicious! And my favorite button? "My Networks Run Deep."