The annual SAS Analytics Conference is upon us again. This year it is known by a different name, Analytics Experience 2016, but the location, Las Vegas, is the same as it has been the previous two years. Just like last year, I will be attending and presenting on analytics for panel data using SAS/ETS® for econometrics and time series.

While preparing for my trip I was reminded of a paper I once read in Chance magazine (Croson, Fishman and Pope 2008) that concluded that poker, like golf, is a game of skill rather than luck.  The paper was published in 2008 during the heyday of televised poker, when it seemed that ESPN aired poker tournaments and little else.  The paper especially struck me because it quoted one of my favorite movies:

"Why do you think the same five guys make it to the final table of the World Series of Poker every year? What are they, the luckiest guys in Las Vegas?" – Mike McDermott (played by Matt Damon in Rounders)

Upon rereading the paper I realized the datasets the authors gathered followed a design for panel data.

Panel data occur when a set of individuals, or panel, are each measured on several occasions. Panel data are ubiquitous in all fields, because they allow each individual to act as their own control group. That allows you to focus on identifying causal relationships between response and regressor, knowing that you can control for all factors specific to the individual, both measured and unmeasured.

In regards to Croson et al. (2008), the individuals were poker players whose results were recorded over multiple poker tournaments. The authors gathered two panel datasets, one for poker players and one for professional golfers. They surmised that if the associations you see for poker mimic those for golf, then you should conclude that poker, like golf, is a game of skill.  After all, one would never theorize that Tiger Woods has won 14 major championships based purely on good karma.

Focusing on the data for poker, the authors gathered tournament results on 899 poker players. Because poker tournaments vary in the number of entries, only results in the top 18 were considered, and that number was chosen because it corresponds to the final two tables of 9 players each. The response was the final rank (1 through 18, lower being better) and the regression variables were three measures of previous performance. One such measure was experience, a variable indicating whether the player had a previous top 18 finish.

Among other similar analyses, the authors fit a least-squares regression of rank on experience:

where i represents the player and j the player’s ordered top-18 finish.  From the analysis they found a statistically significant negative association between current rank and previous success. Because lower ranks are better, they concluded that good previous performance was associated with good present performance. Furthermore, the magnitude of the association was analogous to the parallel analysis they performed for golf. They concluded that because you can predict current results based on previous performance – in the same way you can with golf – then poker must be a skill game.

The authors used simple least squares regression, with the only adjustment for the panel design being that they calculated "cluster robust’’ standard errors that controlled for intra-player correlation.  They did not consider directly whether there were any player effects in the regression.

After obtaining the data, I used PROC PANEL in SAS/ETS to explore this issue.  I considered three different estimation strategies applied to the previous regression. PROC PANEL compactly summarized the results as follows:

The OLS Regression column precisely reproduces the analysis of Croson et al. (2008) and shows a significant negative association between current rank and previous experience.  The Within Effects column is from a fixed-effects estimation that utilizes only within-player comparisons. You can interpret that coefficient (0.39) as the effect of experience for a given player. Conversely, the Between Effects column is from a regression using only player-level means, that is, the estimator uses only between-player comparisons. Because the estimator of the within effect for experience is not significant and that for the between effect is strongly significant, you can conclude the data exhibit substantial latent player effects. That is not surprising, because measures of player ability (technical, psychological or mystical) weren’t included in the model.

The augmented analysis does nothing to invalidate the Croson el al. (2008) conclusion that poker involves more skill than luck. However, to believe that premise you must begin with the untested (yet reasonable) assumption that luck is something that, even if it plays a factor in one tournament, cannot be maintained over a career. You must rely on common sense and not the data at hand to rule out luck as a latent (and mystical) player ability. With that question settled, the data go on to indicate that luck is not even a factor for single tournaments, each of which can be thought of as a long-run realization of hundreds of poker hands.

The PROC PANEL output merely furthers the point that some poker players (like their golfing counterparts) are just better at their craft than others.

Then again, maybe they really are the luckiest guys in Vegas.

If you are curious to know more about panel data, what’s available in SAS and how it may be applied, you can catch my theater presentation (that’s just a fancy way to say `talk’’), "Modeling Panel Data: Choosing the Correct Strategy," at the SAS Analytics Experience conference September 12-14 in Vegas. I'll be speaking on Wednesday, September 14, 1:15 PM - 2:00 PM. You will not catch me at the poker tables, however. My poker game stinks. 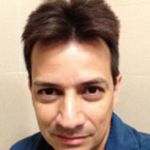 Bobby Gutierrez is a senior research developer at SAS with over 15 years’ experience producing statistical software. He earned a PhD in Statistics in 1995 from Texas A&M University.