Yesterday we had a 'special election' here in NC, to elect new members to the House of Representatives for Congressional Districts 3 and 9. The election got a lot of national news coverage, therefore I thought people might like seeing the results plotted on a map.

Before I decided to create my own map, I first looked around to see what maps already existed. I found several where the winning party was shown by color on each county (or portion of the county in the district). This type of map was ~OK if you just want to see where the Democrats or Republicans out-voted the other party in a county, but it didn't really tell me "how important" the votes in that county were. For example, a large county does not necessarily have a large number of voters, and vice versa. Here's an example of such a map from the New York Times: 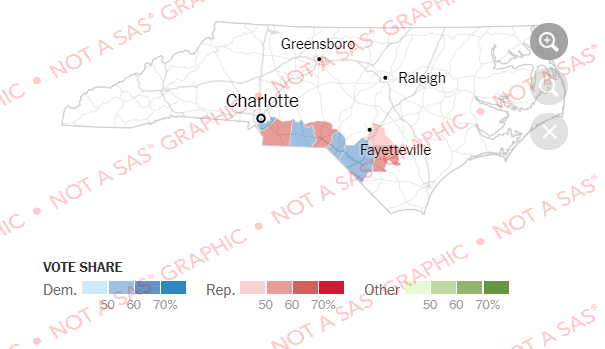 Follow along as I try to create a better map! First I downloaded the NC Congressional District shapefile, and imported it into SAS using Proc MapImport. Here's what the imported map looks like, with districts 9 and 3 colored dark gray.

Next I annotated some text, so people would know what was being plotted on the map. I added some title text, and labeled the districts with a '3' and '9'.

I got the election results from the official NC State Board of Elections website. I couldn't find an easy way to download all the data at once, therefore I manually viewed the report for each county, and copy-n-pasted the data into a spreadsheet for each county (there's bound to be a better/easier way somewhere?!?)  I then imported the data into SAS, and merged in the X/Y coordinate county centroid, so that I could annotate a marker on each county to represent the votes.

For those who might want more information, I show the important details in mouse-over text. Click here to see the interactive version of the map, with the mouse-over text.

I think the bubble map is great for showing the election results at the county level ... but it isn't much use for showing the most important detail - who won the elections? A simple table is a much better way to show the total number of votes, and the winner in each district. I created these tables using simple Proc Print, with the numeric columns sum'd. 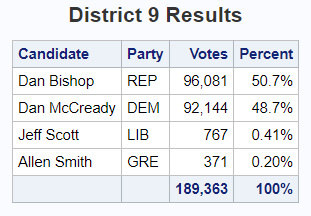 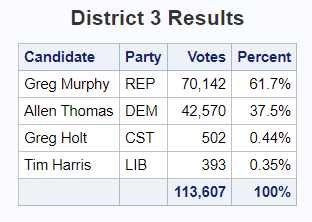 Did this map give you any more/different insight into the election results? What do you like, and dislike about the bubble/pie approach? What other suggestions do you have? (Feel free to discuss in the comments section.)