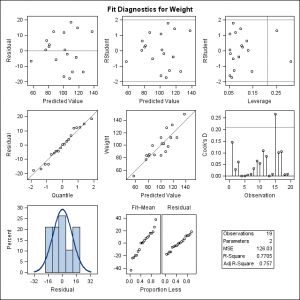 Let's begin by running PROC REG, displaying the diagnostics panel, and outputting the data object to a SAS data set: 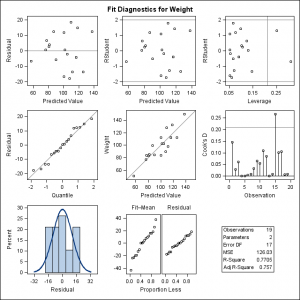 You might consider a naive approach to re-creating the diagnostics panel from the data object and the graph template by using PROC SGRENDER as follows: 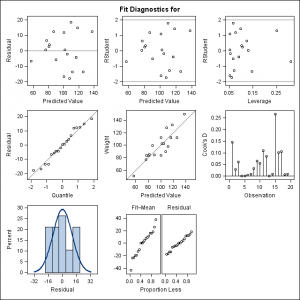 You can run the following step to create the graph, output the data object to a SAS data set, and capture the dynamic variables in an ODS document.

You can list the contents of the ODS document as follows:

You can store the names of the dynamic variables and their values in a SAS data set as follows:

The path on the OBDYNAM statement is copied from the listing of the contents of the ODS document.

The following step preprocesses the data set of dynamic variables:

Variable names are upper cased, and the automatic dynamic variables that contain the number of observations in the data object columns are discarded.

The following step writes the graph template to a file:

If you need to do ad hoc template modifications, you can do them before you perform the preceding step or build them into the subsequent DATA step that processes the template.

The following step reads the file that contains the graph template, identifies the beginning of the DYNAMIC statement, and extracts the names of all of the dynamic variables:

This step stops when it hits the semicolon at the end of the DYNAMIC statement.

The following steps sort the two lists of dynamic variables so that they can be merged:

The following step reads the template file again and modifies it:

This step uses CALL EXECUTE to submit a PROC TEMPLATE statement, convert the DYNAMIC statement to a comment, submit an unmodified version of every other template statement, add an ANNOTATE statement after the BEGINGRAPH statement (to enable subsequent SG annotation), and submit a series of NMVAR and MVAR statements. There are various ways to annotate by using GTL. This is the simplest, and it enables you to to use annotate coordinates in graph percentage units. See the SG Annotation documentation for other options. The following step is not necessary, but it shows the modified template:

The following step creates all of the macro variables that the NMVAR and MVAR statements need:

Now you can use SG annotation to modify the graph. This is illustrated in two simple examples. The first example adds a date to the bottom right corner of the graph: 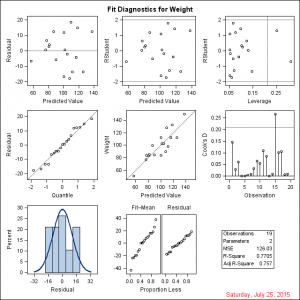 The second example also adds a watermark across the graph: 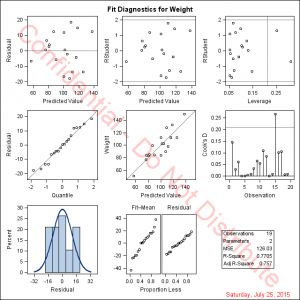 Like most things in SAS, there is more than one way to approach a problem. The following step combines all of the steps above that follow the creation of the OUTDYNAM data set (except the annotate data set creation step). The first step adds the ANNOTATE statement to the template:

Other than that, the template is not modified. The following step generates and runs the PROC SGRENDER step:

One final example modifies the graph template as well to provide the same formatting for the R square and the adjusted R square: 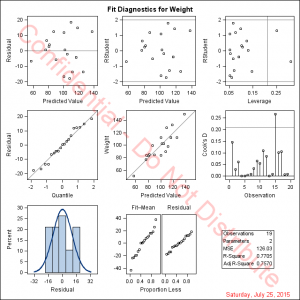 The first step uses an IF statement to change the BEST6. format to a 6.4 format for the R square and the adjusted R square. Of course you do not need to modify templates in a DATA step, but this template is so large that it is hard to show other ways to change it.

In summary, you can capture graphs that analytical procedures create, modify the graph template, modify the dynamic variables, and perform additional modifications by using SG annotation.

Click here for a full example that uses a macro to automate most of the steps.