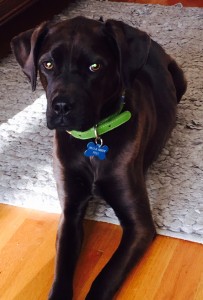 As the torrential downpour of rain and gusty winds hit The Triangle and much of the south last week, I was keenly aware of behavior…my dog’s behavior. With the wetness of their paws, they would enter the house and immediately sit on a towel so we could dry them. Opportunity to practice this behavior/new habit hasn’t been lacking since we’ve had so much rain over the last few months. How far we’ve come. Who would have thought that our youngest pupster, Bella (aka Little Tiny), would have been so cooperative. This is a dog who was adopted and given back 3 times between 6 and 16 weeks due to her “free spirit.” She’s been with us for almost two years and we’re happy she’s found a home (and some manners). I want to believe we had something to do with her conduct, but most likely her big brother, Tucker, receives credit for being a good example. Of course, puppy school certainly didn’t hurt! 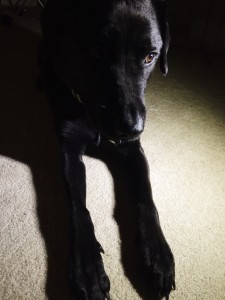 A habit by definition is something a person (or dog) does often in a regular and repeated way. Habits are good…and bad. “Little Tiny” jumping on a visitor, although friendly, is not considered a good habit. It’s still a “work in progress.”

Working on a new behavior takes commitment.A few years ago while reading  "The Power of Habit," I discovered that 40-45% of what we do daily is simply a habit. Once upon a time, this habit was a new task that we had to think about. For instance, if you learned how to drive a stick shift vehicle, the coordination of pressing the clutch and shifting at the proper time was most likely a bit clumsy. Then, you fell into a rhythmic symphony of flow. Next thing you know, you subconsciously hear the sound of the engine and shift when it feels right. You created a habit.

In my profession, it’s common to work with individuals who want to make healthy lifestyle changes. This can range from losing weight to being more mindful through meditation. They have devoted time to cultivate a new behavior. In the beginning, an extrinsic reward such as shedding a few pounds or reducing stress might have been involved. As the new behavior becomes habit, the intrinsic value/feeling begins to outshine the initial goal.

I was recently talking with a client who started taking yoga because she wanted more physical activity and flexibility. Now, she simply attends because it makes her feel good. It is part of who she is and she can’t imagine not having this in her life.

Psychologists believe people’s behavior is driven by intrinsic or extrinsic motivation. Intrinsic means that it comes from within. A person performs a behavior and enjoys it. They are rewarded simply by performing the behavior. Extrinsic means an individual participates in a behavior because of outside factors. Extrinsic can help motivate. For instance, if someone receives a pay increase because they pass an exam, this can assist them in reaching the goal. They may not be fond of studying, but they are motivated by the money. For those who are intrinsically motivated, an extrinsic reward isn’t necessary. The best of both worlds is when there is a union. For an artist, this can mean creating a painting out of joy and passion. If he/she sells it, that’s an added bonus (especially if that is their means of financial support).

Behavior became one of my interests as I began to marry my profession as a research chemist with health education. I’m a natural born researcher. Give me a health or wellness topic and I guarantee I’ll learn the ins and outs so methodically that you’ll think I’m a nerd. It’s a good thing I have a teenage daughter to tell me what’s cool and trendy (and to tell me that I am indeed a nerd)!

The first big behavior study that I was solely responsible for was implementing a “whisper zone” in a neonatal intensive care unit (NICU). Through my job as a researcher, I had investigated sound readings in the NICU and made a discovery. Noise levels were extremely high at the bedside of premature infants and this appeared to interfere with their health and ability to thrive. They were constantly startled which appeared to influence their oxygen saturation, heart rate and more. When it came time to pick a topic for my thesis in grad school, it seemed like a natural fit to create a program that educated the medical staff regarding noise levels and the impact on premature infants. It was habitual for all medical staff in the NICU to conduct medical rounds at the bedside, allow medical equipment to beep or alert for several minutes and speak to colleagues across the room. This had been done for years and there was not a program in place to inform them of the impact their behavior might be having on the preemies.

What I knew about this group of professionals was that they wanted to provide the very best care to these infants. They were delicately looking after them as if they were china dolls that could break. I knew that education was the key to changing their behavior. After numerous educational sessions providing information of noise levels ranging from heat/air ventilation to go-cart races, I informed them of the noise levels inside our NICU. You could have heard a pin drop! This was the “aha” moment I was looking for. They were astonished at how loud the levels were, especially when medical rounds took place. 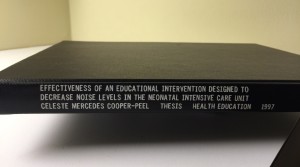 During the next week, a “whisper zone” was implemented at the bedside of infants with bright yellow tape on the floor outlining the areas. When I took down the dosimeters daily to download, staff members would ask how we were doing. After using SAS software (of course) to analyze the data, I announced the findings. Sound levels dropped significantly. I’m sure they would have cheered loudly if they weren’t so cautious about being noisy around me. They told their friends and family. There was talk in the breakroom of how well some of the patients seemed to be doing the week of the study and how they were continuing to be quiet in the NICU.

Initially, the staff members were asked to participate and a reduction in noise was the extrinsic reward. I received more than I hoped for. They were proud! The intrinsic reward was that they felt good about what they had accomplished. Even after the study was over, the medical staff voluntarily continued to wear their “whisper zone” buttons. Months later, I would hear them tell the new residents about the study and how they should speak quietly in the NICU.

What transpired was continued quietness at the bedside. A new NICU in Greenville, NC was built several years after the “whisper zone” was implemented which includes behavioral and environmental modifications. Other NICUs throughout the world have utilized this research to adopt noise reduction protocols. In speaking with them, many agree these behavior changes were easy to implement and maintain because the staff’s goal is to have infants who grow and flourish.

The “whisper zone” results were fortunate as most behavior change requires time. Research shows that it takes 21-66 days to form a new habit. Extrinsic may assist us in the beginning, but intrinsic motivation is what drives us to fulfill our inner potential and is personally rewarding. We feel as if we are in control of the outcome of our efforts. This can lead to our overall happiness which is a topic I’ll save for next time.

Celeste has been in the science, health and wellness field over twenty-five years. She began as a research chemist with a concentration in genetics and nutritional biochemistry. After working in the medical field, she saw the need to follow a path of proactive wellness and prevention. After receiving her Masters in Health Education, she ventured into the mind/body world receiving training in Mindfulness-Based Stress Reduction and Yoga. Shortly after, she received the 2003 Wellness in the Workplace Award for a large health system in the state of Virginia. In 2004, Celeste joined SAS Institute, Inc. and continues to be passionate in her position overseeing Wellness and Fitness. She believes curiosity and collaboration bring insight and new ideas which bring out the best in everyone from team members to those who are making healthy lifestyle changes. Believing that the body knows how to heal if given the proper tools, Celeste earned certifications in Aromatherapy and Essential Oils, Classical Chinese Medicine and Homeopathic & Naturopathic Medicine. She earned her Doctor of Naturopathy degree in 2020. Celeste is a published author and practices what she preaches and teaches. She is a nationally recognized Master Certified Health Education Specialist (MCHES) and has advanced certificates in Integrative and Functional Nutrition, Genetics and Genomics. She is an Experienced Registered Yoga Teacher (E-RYT) with the National Yoga Alliance, Mindfulness-Based Stress Reduction (MBSR) Instructor, Functional Medicine Certified Health Coach (FMCHC) and Certified Yoga Therapist (CYT). Follow @ccooperpeel on Instagram.