This blog is a part of a series on the Data Science Pilot Action Set. In this blog, we discuss updates to Visual Data Mining and Machine Learning with the release of Viya 3.5.

In the middle of my blog series, SAS released Viya 3.5. Included in Viya 3.5 was the release of Visual Data Mining and Machine Learning (VDMML) 8.5, which includes several new Data Science Pilot features and actions. Therefore, I will go over the two new actions, the new SAS Studio task, and the new node for the visual Model Studio interface. As a result of these additions, the Data Science Pilot action set is more powerful and feature generation has just gotten even more easier and accessible!

There are now nine Data Science Pilot Actions. The two newest actions are the detectInteractions action and the generateShadowFeatures action.

The tasks in SAS Studio make programming in SAS much easier. Tasks build out the code in real time based on the inputs you select from a point-and-click interface. As a result, you can write SAS code faster than you can type while not worry about syntax errors. In the latest release of Viya 3.5, the featureMachine action was included as a task. To use the task, simply select it from the task menu, select the data, and select the target variable. The task includes additional options for variable screening and feature engineering. In addition, you can choose what kinds of output you want, including the generated features, the feature metadata, the feature pipelines, and an Astore to score new data. 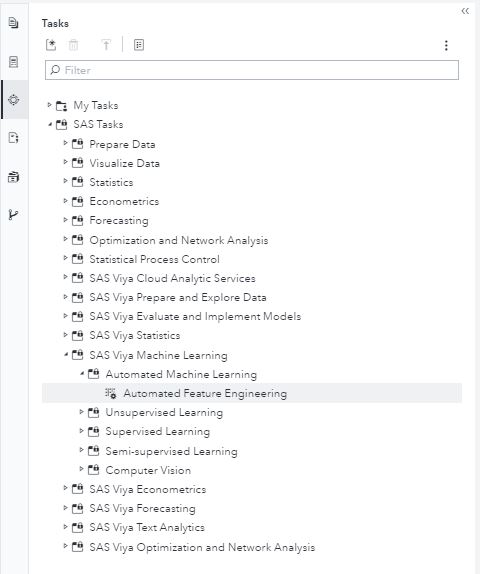 In addition to a SAS Studio task, the featureMachine action is also available from the Model Studio visual interface as a node. In Model Studio, you can quickly chain together data mining preprocessing nodes, supervised learning nodes, and postprocessing nodes  into a comprehensive analytics pipeline. To use the node, simply add it to your pipeline and select the desired transformations and screening rules. Now your Model Studio pipelines can include Everything But the Kitchen Sink Feature Generation!