This is the third post describing a computer vision project I worked on at SAS to identify liver tumors in CT scans. In my previous post I talked about testing different models and hyperparameters for the models. Today, I’ll talk about data processing for image data. If you need to catch up, read my previous posts here.

Somewhere around the halfway point of my project, I realized that I needed to leave my deep learning models alone for a while, so I could come back later with fresh eyes. In the meantime, I wanted to start tackling the pre-processing and post-processing of the data to complete the pipeline on either end of the core model.

The first step in the data processing pipeline is taking the raw image, increasing its contrast through histogram equalization, cropping it to a relevant size, and padding it on all sides by 128 pixels (I’ll explain this in a bit) and generating patches from it. These patches will be used to turn this segmentation task into a classification task.

The method I’m using is called the sliding window approach. This approach requires dealing with the 3D CT scans as hundreds of 2D slices. Each slice will be used to generate thousands of 257x257 pixel patches to use as training data. The method for generating these patches is essentially sweeping a square of size 257x257 pixels across the original image with a step-size stride of a certain number of pixels (in this case, 7). Every seven pixels, a patch is generated.

This is where the classification component comes in. Each patch will be given a label: lesion or non-lesion. The patch is considered a lesion patch if the middle pixel of that patch is inside of a lesion in the manually segmented black-and-white ground truth scans that were annotated by the radiologists. If the pixel is white in the ground truth mask, the label is lesion. If not, then it’s a non-lesion patch.

I padded the image on all four sides with a black background to prevent information loss. Since we’re only classifying patches based on the middle pixel, this allows each pixel in the scan to be the middle pixel of one of these patches and to get classified in the training data:

Now that we have our patches, it’s good practice to augment those patches to generate even more data to train the model on. This means replicating patches and tweaking them in different ways, by increasing contrast, lightening, darkening, rotating, cropping, flipping, sharpening, or blurring. Data augmentation allows the model to be more resilient to possible variations in the data that the model will be tested on, which hopefully leads to a more robust, transferable, and adaptable model.

As a heuristic, I chose 2:1, since it seemed that 1:1 might run the risk of not properly representing the non-lesion samples, but something higher might again result in class imbalance. I ended up with around 122,000 patches in that 2:1 ratio to train my model with.

Stay tuned for my next post where I return to my deep learning model with fresh eyes. 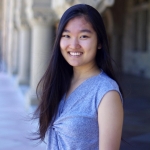 
Julia Gong is a sophomore at Stanford University majoring in Mathematical and Computational Science and minoring in Linguistics. She started at SAS in the summer of 2016, when she created a skin cancer detection software at JMP using image analysis and statistical modeling techniques. In the summer of 2017, she used JMP Scripting Language to build an interactive custom R add-in builder for JMP. In the summer of 2018, she built an end-to-end, automated data pipeline for liver tumor segmentation in 3D CT scans using deep learning and computer vision for biomedical image analytics in SAS Viya and CAS. She has been recognized in international technology competitions, loves public speaking and puns, and enjoys seeking novel solutions in overlooked intersections of AI, machine learning, language, environmental conservation, medicine, service, and art. Julia hopes to pursue a career that unites her many interests in computer vision, artificial intelligence, medicine, natural language processing, social good, education, and sustainability.