When a new Moon passes between the Earth and the Sun, the Moon can cast a shadow on certain regions of the Earth. This natural phenomenon creates a solar eclipse, meaning the Moon covers, or eclipses, your view of the Sun if you're in that region. No surprise that in ancient and modern cultures, solar eclipses were attributed to sup 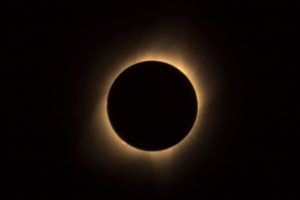 ernatural causes. Even today the darkening of the sky within minutes is still a magical moment to witness. During totality, which lasts only a few brief minutes (the longest will be 7:29 min in 2186 CE), the Moon is surrounded by a gossamer halo. This ring is Sun's solar corona, a super-heated plasma.

To learn more about solar eclipses, their paths and occurrences, I looked at data from NASA covering an amazing five millennium time span. The data set includes details about the different types, magnitude, duration etc. and for the analysis and visualization I used SAS Visual Analytics on SAS Viya. Loading the data set reveals, that there are more than 12,000 eclipses during the 5,000 year period from 2000 BCE to 3000 CE.

There are 4 types of solar eclipses:

So why don't we get total eclipses with every new moon? The Moon's orbit around the Earth is slightly elliptical, and this slight offset from a circular orbit causes the Moon to have different distances to Earth. A total eclipse only occurs when the Moon is near it's closest distance to Earth. I should also mention that Earth's orbit around the Sun is also elliptical so the apparent size of the Sun varies as well. However this does not have a large effect compared to Moon's orbit. Overall, the best chance of totality is when the Moon is closest to the Earth and the Earth is furthest away from the Sun (early July).

The track of the Moon's umbral shadow across Earth is called the Path of Totality. Its typically 10,000 miles long, but only about 100 miles wide. However looking at the data, it could span as wide as 620 miles for the total eclipse, as it did on June 15, 1787.

In order for you to see a total eclipse you will need to be at the center line of the path. The visualization below shows the total eclipse from earlier this month which lasted for about 4:33 min:

The visualization shows the northern and southern path limits in green and the central line in orange. The eclipse duration will be longest on the central line. It seems people in South America were in prime position to witness this special event! Note, the actual shadow is wider than the path shown - however people outside of the green line have only observed a partial eclipse in this case.

Let's investigate the typical location of eclipses given their type. The following chart shows that partial solar eclipses are only found in narrow bands of latitude compared to total solar eclipses, which can be observed everywhere on Earth.

The next solar eclipse will be an annular eclipse on December 26, 2019 and it will be visible from Saudi Arabia, southern India, and parts of Indonesia. People in parts of Europe, Asia, and North-West Australia will see a partial eclipse.

No doubt, total solar eclipses are rare events - at least compared with human life span. Looking at 5,000 years of data for solar eclipses shows that a total eclipse occurs every other year (about every 18 months) - however the chances of you seeing one at one single place on Earth is estimated to happen only every 360 to 410 years (source: Wikipedia).

Given that a total eclipse will rarely exceed 7 minutes, you need to be very lucky to witness one! If you really want to experience this natural phenomena, it's best to travel. But how do we know when the next eclipse will occur?

Given the knowledge about the Earth's and Moon's orbit along with date/time of previous eclipses, we can predict eclipse cycles. The best known and accurate one is known as saros. The following visualization shows the saros cycles from 0 - 3000 CE.

One saros is a bit more than 18 years long. This means that after this period identical eclipses will occur. Since there are two to five solar eclipses every year, there are approximately 40 different saros series in progress at any one time.

Data shows that most eclipses last between 3-4 minutes:

The following visualization shows that duration of the greatest eclipse occurs longest at the Equator:

The reason? Earth has it's greatest rotational velocity at the equator, and as such the observer will be longer in the Moon's shadow.

Visualizing the ring of fire

To summarize and better visualize these insights, I decided to compile all my information into a single infographic. I'm using SAS Visual Analytics on SAS Viya to design the report. Besides embedding some of the previously shown visualization and some additional facts, I also included the eclipse paths of the next 10 years as the main center map visualization. Are you one of the lucky ones along a future path of totality?

If you're interested in learning best practices to design and develop your own infographics, check out these related blog posts: How to design a meteorite infographic and How to design an inforgraphic about volcanic eruptions. A recent SAS Global Forum paper about Supercharging your dashboards with infographic concepts also discussed many of the applied techniques I used here.