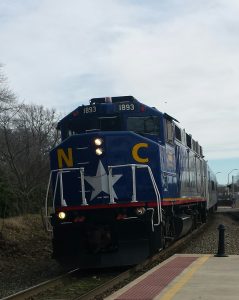 North Carolina has over 300 miles of wide, flat Atlantic beaches as well as the highest mountain in the eastern United States, Mount Mitchell. The variety is impressive for a state that isn't even in the top half of the 50 states by size. One key reason is geometric: North Carolina is a long state. Our geometry is the bane of organizers of any statewide event, including the one statewide scholastic sporting event most strongly associated with Science, Technology, Engineering and Mathematics (STEM) success, the annual NC K-12 Chess Championships.

For the North Carolina Chess Association (NCCA), the pacification of NC's elongation is rotation -- rotating the championship tournament between the three major metropolitan areas of the state over a three year cycle. SAS's first sponsorship of this championship was in Raleigh in 2014 followed by Charlotte in 2015. This year, SAS is honored to sponsor the 42nd NC K-12 Chess Championships the weekend of Feb. 19th-21st in downtown Winston-Salem at the Embassy Suites and Marriott.

I grew up about 50 miles west of Winston-Salem in the "Great State of Wilkes" -- farther west than the North Wilkesboro Speedway, one of the pioneer NASCAR racetracks, but not as far as the campus of Wilkes Community College, the annual site of Merlefest, a large bluegrass festival that attracts as many as 80,000 fans annually. Growing up, Winston-Salem was the nearest big city with tall buildings, a busy downtown (with an ice skating rink!), a big shopping mall and other amenities not afforded to small towns. 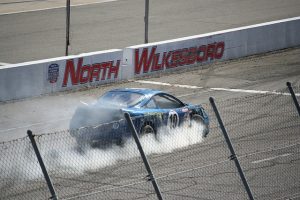 North Wilkesboro Speedway, the "birthplace of NASCAR," is less than 50 miles from the site of the 2016 NC K-12 Chess Championships.

In a state still largely rural, the rotation strategy serves the aspirations of the host city's chess players as well as those of the many smaller communities nearby. Some NC chess families would travel to any point in the state for the chess championship  – even if it were in Lizard Lick, Wilbar, Tick Bite, Meat Camp or Bat Cave. But many families are more travel constrained. For them, bringing the tournament closer every three years is like athletes waiting four years for the Olympics. But unlike the Olympics, any NC K-12 chess player can enter the state championships regardless of previous tournament experience and performance.

For team chess, success has a lot to do with how many players you can turn out, so rotating the top state tournament means rotating the inherent home field advantage. Carrying both a positional and material advantage this year is Atkins Academic & Technology High School of Winston-Salem. 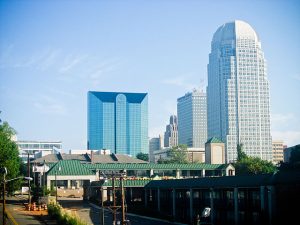 Winston-Salem, the host of the 2016 NC K-12 Chess Championships.

The school boasts "the largest high school chess team in the state" according to Atkins English teacher and chess coach Scott Plaster. "It's a good problem to have when you have to use three separate classrooms just to host your club," he says.

Those players aren't just playing and learning with other Winston-Salemites. Through the Sister Cities organization of Winston Salem, the Atkins team plays with teams from Ungheni, Moldova and Nassau, Bahamas. The clubs use chess.com to bridge the distances. 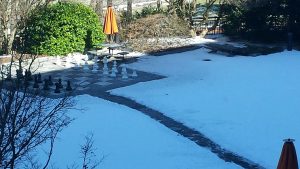 Back at SAS headquarters in Cary, chess on the big board is available even on snowy days.

It's a form of distance learning -- let's call it distance playing. And it's building community across geographies using the ancient language of chess. While chess has been shown to strongly promote STEM-related skills, it's only a potential tool until someone makes it local and available to a student. Bringing chess tournaments closer in space makes it local. Tablets, phones, laptops and PCs can be local, too.

Whether on a tablet, on a table or with pieces taller than a toddler, for hundreds of years chess has brought fun and joy to people's lives. Modern educational studies make clear that chess can bring STEM skills to even the youngest students. SAS is proud to support the NCCA in its efforts to bring chess to all young players across the Old North State.