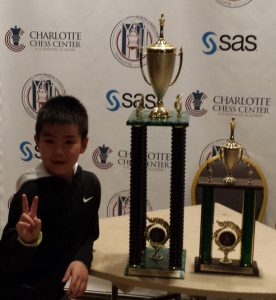 The elementary, middle and high school chess teams were just one example of teamwork at the 2015 NC K-12 Chess Championship held at the Hilton Charlotte University Place Feb 14th-15th. Even the youngest 2015 champion, K-1 champion Alfred Ye pictured here, wasn't born knowing the game -- it took a team of grown-ups, including his coach, Jeff "Pig" Jones of Pig Chess Services in Raleigh, to teach him the game, nurture his skills and provide him opportunities for excellence.

Organizing and promoting the competition

Providing a venue for any statewide sporting event requires a lot of teamwork, especially when the bulk of players are 2nd-5th graders filling up the 6,000+ square foot ballroom shown above. This year, the Charlotte Chess Center & Scholastic Academy (CCCSA) led 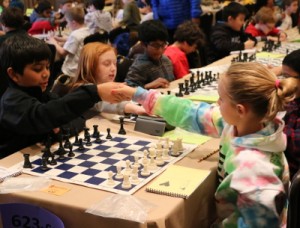 by Peter Giannatos organized and ran the North Carolina championship with the help of many volunteers.

Publicizing the achievements of these young athletes of abstraction is yet another puzzle to be solved by smartphone-toting and web-wielding scholastic chess supporters. Unlike some professional, college and Olympic sporting events, this championship had no satellite trucks on the lawn nor mainstream media photo-journalists with neck-straps for their cameras. This year, ChessStream.com led the media charge by streaming the top games of the two-day championship live over the Internet for over 95,000 page views. (If you didn't catch the live action, you can still look at the archived games.)

And ChessStream's live coverage was just one part of the surge of web and social media attention around this year's championship: 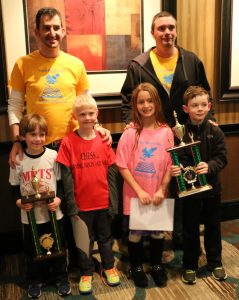 These weren't the only organizations at the championship marrying the centuries-old tradition of over-the-board chess tournaments with the Internet age.  FIDE Master (FM) Mike Klein served as both a coach for ten Charlotte-area scholastic chess programs and as a representative of ChessKid.com where he is an online instructor going by "Fun Master Mike."

Chesskid.com is a unique and popular website that provides chess videos, articles, puzzles and online play against other kids. Chess coaches can even coach online and complement the over-the-board time at their scholastic chess clubs. Klein authored a post about using chesskid.com in his team room at the championship.

The magic of chess

But none of these supporting cast members would matter if it weren't for the young chess players and their enthusiasm for this Renaissance era game. As improbable as it may seem in a screen-infested world, the players are the real engines of scholastic chess growth -- especially the overwhelming plurality of elementary schoolers. They pursue competitive chess for the love of the game, and they get back benefits that will help them with STEM education and other pursuits. This is one example of the magic of chess, and for a lot of these players the magic started at a scholastic chess club at their school.

As players of chess at a young age, these students are in the same long-lived global club as Albert Einstein and many other luminaries in history. Einstein is believed to have played chess as a boy and was friends as an adult with Emanuel Lasker, the World Chess Champion from 1894 until 1921. While most serious scholastic tournament players have several recorded games and a chess rating, Einstein was never rated and only one of Einstein's purported games has survived: a 1933 contest with Robert Oppenheimer in Princeton, NJ. 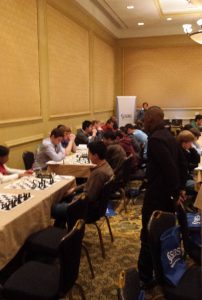 The top boards in the K-12 section.

You can compare the Einstein vs. Oppenheimer contest to the recorded games from this championship. If you want, you could even estimate how good of a player Einstein was, and how well he would have fared at this championship, which included four National Masters (NMs):

The Masters competed in the top section, the K-12, for the top honors. Though technically open to any student from kindergarten through 12th grade, the K-12 section is the domain of advanced high school players. All of the sections except for K-1 played for two days with trophies awarded in the early evening, Sunday, Feb. 15th. Players played between 5 and 7 rounds, depending on section, with generous time controls. The K-1 section played only on Saturday, Feb. 14th and completed 6 rounds. For each game, players earned 1 point for a win, 1/2 point for a draw and 0 points for a loss. The top four individual scores for a team are summed to compute the team score.

And the winners are

A kindergarten player and Doggy await the trophy presentation for the K-1 section.

Congratulations to the NC champion teams for 2015:

And the individual champions and co-champions:

Want chess magic at your school? Start a chess club, help with an existing one or volunteer at a tournament! Here are some links to get you started:

Photos of K-1 team with NM instructors and of two chess players shaking hands by Christine VanCott of ChessKid.com.