Chess in the classroom? Teachers and parents have discovered the educational benefits, and the trend is growing rapidly.  And they are in good company.

On June 13th, 2014, Bono called his time as a scholastic chess player as his  "... greatest childhood pleasure. In Ballymun we had a chess club, and like so many kids at the beginning of the 70s, I fell head over heels for this dizzy strategic game."

A week before, Richard Branson, founder and chairman of Virgin Group, was promoting chess as well -- he nominated chess as the best game in the world. Branson said, “It would be wonderful if everyone in the world could enjoy the competition and sense of achievement chess can provide.”  The week after Bono's post on June 19th,  the Chess Caucus of the United States Congress held its first bi-partisan chess tournament with the goal of promoting chess in education. Helping the congress members with their games were some of the top scholastic chess players in the United States.

Why has this summer seen so much excitement about chess and education? And why would a scholastic chess club have the kind of impact that Bono describes?

If scholastic chess is a gateway to STEM education, then scholastic chess clubs are the path through that gateway for many young would-be chess players. These clubs meet in the school, meet regularly and are among friends. They are more like a sport club than an academic club, especially when the club encourages sanctioned tournament play. While some students learn chess during regular school hours -- for example, Armenia requires chess as part of the school curriculum and the Dalton School in New York City teaches chess to all kindergartners  -- extra-curricular scholastic chess clubs are the most readily available venue for many young beginning chess players.

More and more digital natives are coming to chess. Scholastic chess clubs provide venues so that they can gain the benefits of the ancient game. We need more of them so that we can properly leverage the historic chess bubble being driven by tablets and home computers. In a previous blog post, I discussed some technological options that can help us handle the bubble, but they aren't here yet. To get more scholastic chess clubs, we need more volunteers that are willing to step up and step out of their comfort zones. Then, we can STEM-ulate more of these young minds. 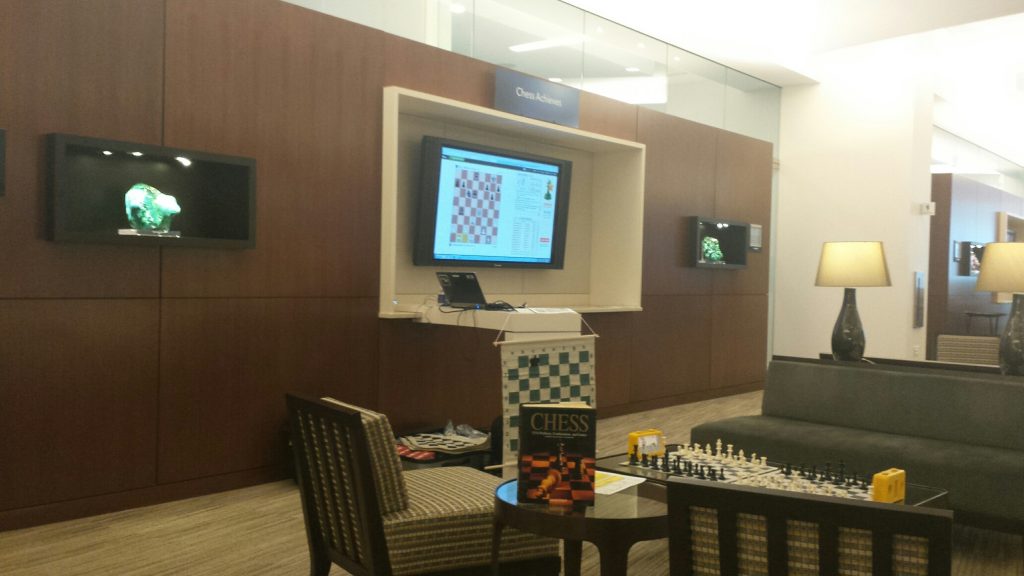 The chess area in the SAS Executive Briefing Center awaiting teachers at the 2014 Triangle High 5 Math Summit, Cary, NC. The chess equipment was provided by the chess club of a local elementary school.