When we talk about the Internet of Things and “analytics at the edge,” we’re talking about modeling data as close as possible to the device – not far away in some warehouse or data storage appliance. So, generally, the edge is anything with a sensor that is transmitting data: an appliance, a car, a manufacturing robot, and so on. 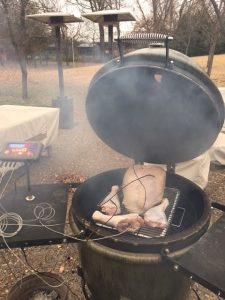 Kevin's turkey is ready to cook - and ready to transmit data.

But could the edge be a turkey?

You’d be surprised what a Brainiac can come up with over a holiday weekend. One of our lead developers in R&D, Kevin Smith, was able to connect his Thanksgiving dinner to the Internet and run some basic analytics on the cooking process. With the right technology, there’s no reason you couldn’t repeat this with your holiday turkeys later this month. But what did he do, exactly?

Kevin has a ceramic smoker with a Wi-Fi enabled thermostat and a built-in web server that can be queried to get access to the smoker’s internal data. He put his turkey breast and drumsticks in the smoker and outfitted them with probed sensors as well (see image).

Two other R&D employees, Scott Kolodzieski and Vince Deters, helped Kevin set up an event stream processing server so he could analyze data streams coming from the smoker and the turkey. He then ran streaming data into a table and used SAS® and Python to summarize and generate periodic reports.

These are pretty basic summary statistics, but imagine if you’re cooking turkeys all the time, or manufacturing smokers. You could do a lot more with this data from multiple cookers to understand ideal temperatures, optimum usage levels for longevity and much more.

What’s next for Kevin and his smoker? “I have some enhancements and more analyses coming up very soon that I think will make this project even more compelling,” he says. “Having the data stored away for future reference is always handy when working with BBQ.  You can use it for future analysis for improvements just like with any other type of data.”

Or, if you’re an average consumer like me, you might look into buying yourself a smoker and cooking an IoT turkey for your family this year. Enjoy the holidays everyone, and happy 2016! 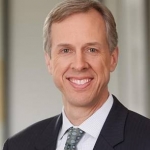