I can tell that my area (Wake county, NC) has a growing population, because the traffic keeps getting worse and worse. But it's a little difficult to quantitatively gauge growth by looking at traffic congestion. Therefore let's have a look at a more direct measurement - the actual population data!

How did I decide on this topic? Well, I was browsing through the NC reddit group, and saw a headline about "Two North Carolinas: Cities grow at record pace while rural counties fall behind". The linked article was behind a paywall so I couldn't read it, but the nearly 200 comments contained some interesting information. One of the more useful comments was from reddit user melodykramer - she works at Carolina Demography, one of the sources cited in the article, and she posted some links to related studies on their website. I went to their site and found an interesting article on net migration, with a map that piqued my interest: 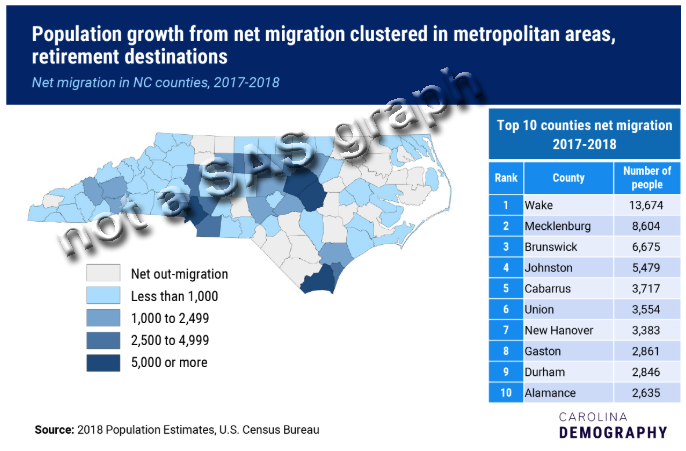 I liked Carolina Demography's map, but I decided to make my own version ... with a few changes:

The original map indicated that they got their data from the US Census Bureau, therefore I looked there for the similar data I wanted. I quickly found the NC county population estimates for 2017 and 2018 by going to this factfinder page, and selecting North Carolina.

I copy-n-pasted the table text into 'datalines' in my SAS job (to make the code all-inclusive, and easy to share), and used the following code to import the tab-delimited data. If you'd like to experiment with the SAS job, here's a link.

I build up my maps one change, or layer, at a time, and I think it's educational to discuss those iterations. In this first map, I simply plotted the change in population, using 5 levels (quintile binning) and 5 gradient colors. This gives me a good general feel for the population change in the counties.

But with data like this, I really wanted a bit more control over the binning and the colors. I wanted the lowest bin to just represent negative growth, and I wanted that to be a different color from positive growth. And I wanted to control the start and end values for each color bin of the positive growth values. To do this, I programmatically assigned the data values to 5 'bins' or 'buckets' and then used a user-defined format so those bins would show the detailed range information in the legend.

The colors in the original Carolina Demography map were visually pleasing, but I found it a little difficult to differentiate a couple of the colors. Therefore I used the colorbrewer website to help pick my colors - they put a lot of thought and testing into choosing colors that are good for analytics. I also customized the layout and location of the legend, and then annotated some title text so I could get it into a non-standard title location.

My map above is at about the same level of functionality as the original Carolina Demography map. But I wanted to add one final visual enhancement - reference points. Having lived in NC all my life, I'm pretty familiar with the counties, and I know which ones have big cities, etc. But even for me, the map would be a lot easier to quickly grasp if it showed the locations of the major cities on it. Therefore I annotated markers and labels for the major cities. The red color might seem a little 'harsh,' but I wanted to use a color that would be totally different from the colors used in the legend. 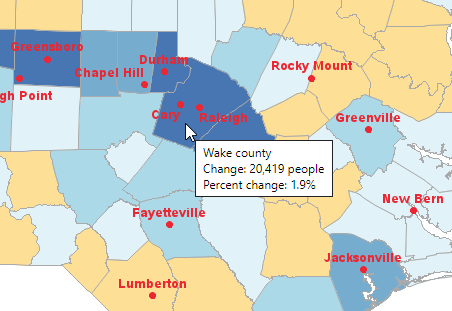 So you might be saying to yourself "Self - adding 20k people to Wake county in 1 year seems like a lot ... but what do these numbers look like as a percentage of the county population?" Good question! Therefore I created a second map by percent population change. I think the % change is as important as the total change (probably even more important, to the individual counties with a large % change). I always recommend looking at the data in multiple ways!

So, is the population increasing around the big cities? How about 'retirement' locations? Around the jobs? How about areas with/without snow, hurricanes, floods? Around military bases? Around fast Internet and similar infrastructure? Feel free to share your theories in the comments!

My theory? ... Well, I have noticed that several of my friends seem to be having a *lot* of babies. Just sayin'! For example, I think my friend Mary might have single-handedly increased the population of Wake county by about 1%, LOL! Here's a picture of Mary, and her passel of kids (thanks for letting me use this photo, Mary!) 🙂 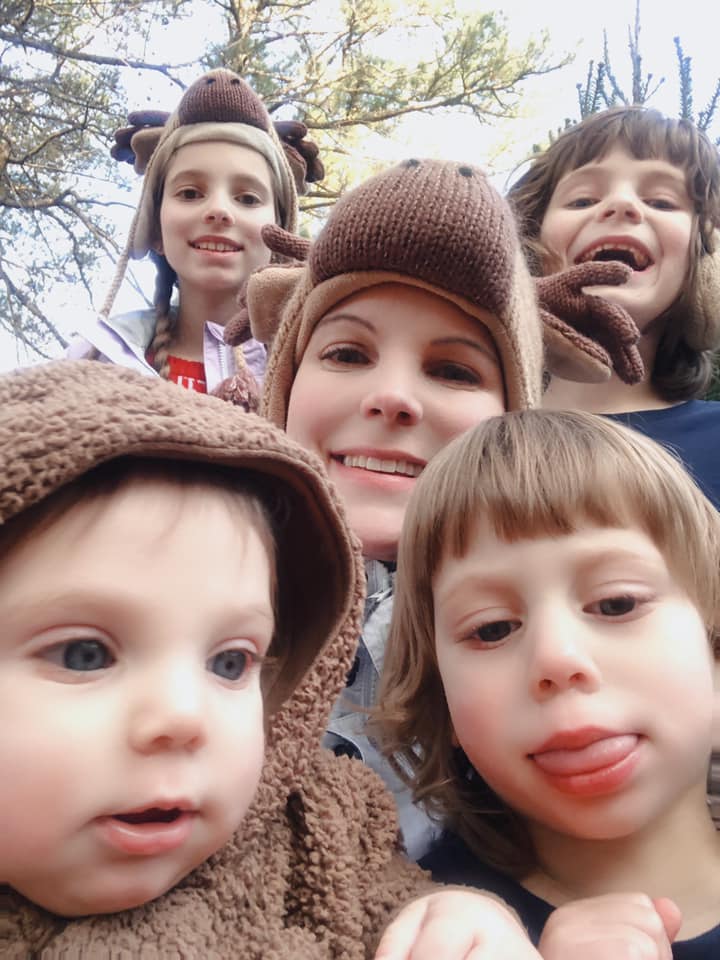