Last week I published an article on creating bar charts with visual category values.  The idea was to use visual icons for the category values in a HBAR of age by animal.  For the data, I referred to a visual from the 2010 Encyclopedia Britannica Inc. that I found on the web.  I included that visual in my article, and many readers were intrigued by the visual itself, and how it cleverly  placed many items on the compressing squiggly timeline.

A couple of readers proposed some ideas to create the visual using SGPLOT, and I decided to follow up over the weekend.  The results are shown below.  The first task is to generate the sinusoidal timeline with a reducing pitch so there is more space available in the early part where there are more animals, and less space later.  This was easy to do by using the TYPE=log option on the y-axis.  I computed a simple sine wave over 7.5 cycles, with y starting with 1 and ending with 751.  Since I want to use the log option, I need to avoid zero or negative values on the y-axis.

The shape of the log transformed sine wave with ymin=1 was undesirable.  The ymin value can be adjusted to obtain the shape you want.  Here are two curves.  I settled on the curve on the right with ymin=50. 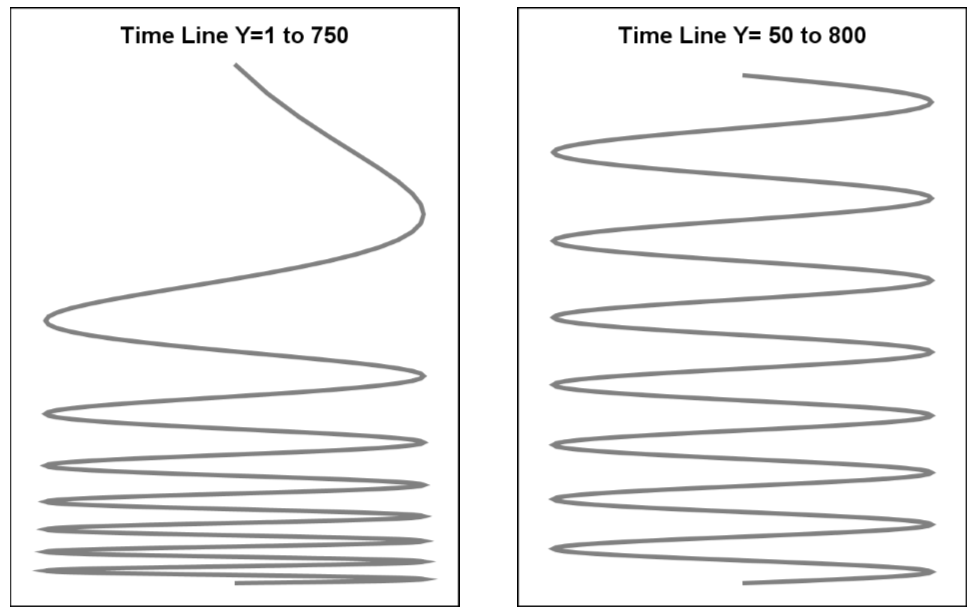 Now, I created a separate "Animals" data set with animal name and age.  I computed the equivalent x and y coordinates for each animal by using the reverse equation from the one used to generate the sine curve.  For the curve, the value of age=20*angle/360.  So, the (x, y) of animal by age can be computed as angle= age*360/20.  Then, (x, y) can be computed as in the timeline data.

A simple join of the timeline and animals data set results in the combined data set that has all the information we need to plot the graph.  Once again, we use the SYMBOLIMAGE statement to define image markers for each of the animal and use the STYLEATTRS statement to enter these into the group symbol list.  Then, we can use the SCATTER statement to display the image of the animal at the appropriate (x, y) location.  I shifted the icon up by 2 units.  The name of the animal is displayed below the icon using a TEXT statement. I only had the patience to place 9 icons on the timeline, but it would be straightforward for the motivated person to add all the animals needed.  A label for each animal is placed below the icon using a TEXT plot statement.

Note the following features of the program: