In the past few weeks, I have written two posts on SG annotation and on saving and then modifying the graphs that analytical procedures produce:
Modifying dynamic variables in ODS Graphics
Annotating graphs from analytical PROCs

Today, I finish this series with one more post. This one shows how you can annotate graphs with multiple panels. If you want to fully understand today's post, you will need to understand my previous two blogs. Those posts show you how to run an analytical procedure, output the data object that underlies a graph, save the dynamic variables in an ODS document, process either the template or the PROC SGRENDER call to incorporate the dynamic variables, and then modify the graph. In this example, you will learn how to use a macro to add ANNOTATE statements to each LAYOUT OVERLAY code block in a template that an analytical procedure uses. This enables you to send annotations to each panel and use panel-specific drawing spaces. In contrast, my previous blog showed you how to add a single ANNOTATE statement to the template, which enables annotation but does not provide the ability to specify panel-specific drawing spaces. This example also modifies the data object and the graph template.

I hope that everyone cringed after reading the last sentence. Modifies the data object? Really? Yes, there are times when it makes sense. However, you should never change the data that underlie a graph. This example changes the data object in order to change which parts of the graph are labeled; no numbers are changed.

This example works with the standardized coefficients progression plot in PROC GLMSELECT. The following step creates the plot: 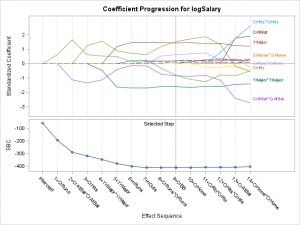 The graph shows how the coefficients change as new terms enter the model. PROC GLMSELECT labels some of the series plots. It is common in this graph for several coefficients to have similar values in the final model. PROC GLMSELECT tries to thin labels to avoid conflicts. For example, the first term that enters the model after the intercept is CrRuns. Its label is not displayed since it would conflict with the label for CrHits. In this example, you will learn how to select a different set of labels to display. In particular, you will display labels for the standardized coefficients in the selected model that are outside the range -1 to 1. This requires you to change the data object to change which series plots are labeled. Then you can add annotation to highlight the selected model. In PROC GLMSELECT, the final model does not usually correspond to the end of the progression of the coefficients. In this case, it corresponds to the model that is displayed at the reference line at step 9.

You can preview the results as they will be after annotation next. 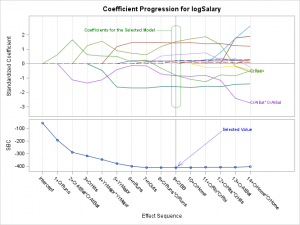 You begin by creating a data object and storing the graph along with the dynamic variables in an ODS document:

The next step reads the data object, extracts the parameter labels for the coefficients that are greater than 1 and less then -1 in the selected model, and outputs to a macro variable the number of the last step:

This step relies on knowing that the selected model was found in step 9. If you are writing a general purpose program to do this modification, you can process the __outdynam data set that the macro makes below, output the value of the variable _ChosenValue, and then run the preceding step.

The next step processes the data set that was created from the data object:

This data object is typical of the data objects that are used to make graphs. It has several components of different sizes and missing values elsewhere. The last part of the data set contains the coordinates and strings that are needed to label each profile. The preceding step sets the parameter value to blank in the last step (the one that corresponds to the labels) for all but the terms with the most extreme coefficients. When the Y coordinate for a label is missing (because PROC GLMSELECT suppressed it due to collisions), the Y coordinate value is restored.

The next step provides the macro that contains the code that modifies the graph template:

It performs two changes. By default, labels are positioned by using the DATALABEL= option in a SCATTERPLOT statement. This step removes that option and instead specifies the MARKERCHARACTER= option. You can use the MARKERCHARACTER= option to position labels precisely at a point. In contrast, the DATALABEL= option moves labels that conflict. The first IF statement also adds the option MARKERCHARACTERPOSITION=RIGHT so that labels are positioned to the right of the coordinates. This change is based on the idea that sometimes it is better for labels to be precisely positioned, even if they collide. You can additionally modify the label coordinates if minimizing collisions is important. The TRANWRD (translate word) function performs the change, substituting a longer string from a shorter string. The second IF statement removes the curve label. You will later add it back in through SG annotation.

The next step creates the SG annotation data set:

The template processing macro, %ProcAnnoAdv, is next:

This macro is similar to the %ProcAnno macro that I provided and explained in my previous blog. The macro adds the ANNOTATE statements to the template and calls PROC SGRENDER with the appropriate dynamic variables specified. You can specify a macro name in the ADJUST= argument to insert code into the macro to edit the graph template. In this case, you will add the macro %Tweak. You can set the ANNO= option to blank to prevent PROC SGRENDER from specifying the SGANNO= option. By default, when OVERALLANNO=1, a single ANNOTATE statement is added to the template (as in my previous blog). In this example, OVERALLANNO=0 and an ANNOTATE statement is added to each layout overlay. The following statements are added to the template:

The following step runs the macro and creates the modified graph:

This SG annotation data set is large. There are many variables, and varying subsets are used for each annotation. The output shown in the links below list the relevant subsets.

Observation 1 positions text in the LAYOUT OVERLAY labeled 'lo1'. It specifies coordinates based on the percentage of the data area. The string is anchored on the right, next to the line.

Observation 3 draws a rounded rectangle in the LAYOUT OVERLAY labeled 'lo1'. There is one X and one Y coordinate. The X coordinate is in the data space and the Y coordinate is in the wall percentage space. The rectangle is anchored in the bottom left (that is where drawing starts), then it is drawn with a height of 80% of the wall and a width of 0.6 times the width of a discrete cell. The discrete offset of -0.3 moves the rectangle 0.3 data units to the left from the coordinates specified in (x1c, y1). The CornerRadius variable controls the degree of rounding. The result is a rounded rectangle centered around the reference line for the selected step.

Observation 4 positions text in the LAYOUT OVERLAY labeled 'lo3'. Notice that the layout has changed with this observation. The text is anchored on the left, next to the arrow.

In summary, this example builds on examples in my previous posts to show you a small part of the flexibility of ODS Graphics. You can modify graph templates, dynamic variables, and you can use SG annotation to customize the graphs that analytical procedures produce. While not shown here, you can also change styles. You can even (cringe!) modify the data object.