Spirals are cool.  And useful.  We use them every day without thinking about it.  Every time the road turns from a straight line to a curve, we go through a transition spiral.  Spirals allow us to change curvature in a steady increasing or decreasing fashion.   Without a spiral, this transition would be abrupt. 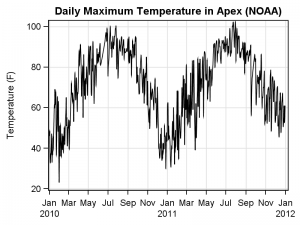 For our purpose, spirals can also be useful for visualizing data that is cyclical in nature.  If you are visualizing daily high temperature over a 2 year period, you could plot it on a straight X axis as shown on the right.

The cyclical nature of the data is evident in the graph.  But, this same cyclical behavior may be  easier to understand on a spiral with one cycle per year.   So, that is the plan for today.

A visit to Wikipedia page on spirals reveals there are many kinds of spirals including logarithmic, hyperbolic and many more.  Let us start with the simple Archimedean Spiral.  This has the simple formula:  R = A + B * theta.

Experimenting with this equation yields these different spirals for various values of A and number of cycles. 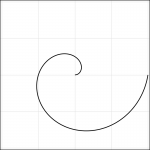 The x and y points are computed using the spiral equation, for theta values up to N * 360, where N is the number  of cycles.  The curve is plotted using the series statement of the SGPLOT procedure. 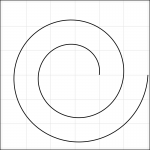 Once the spiral is drawn, now we need to map the data on to the spiral so that the time axis is along the spiral and the response values are drawn normal to the spiral, towards the center. 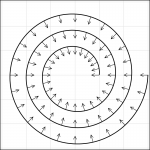 The graph on the right shows the basic idea.  At each point along the time axis, we compute the theta and then find the (x, y) point on the spiral.  The direction vector (cx, cy) for the response (the arrows) is towards the center of the spiral (0, 0).   In the example on the right, all arrow heights are half the spiral spacing.  So, we can compute the (x2, y2) location of the arrow heads from (x, y) and (cx, cy) as shown in the program.

I have used some SAS 9.4 features to draw smooth curves and remove background wall and border.   A SAS 9.3 version program is also included. 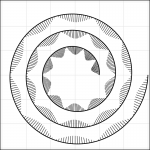 With real time series data, we would normalize the response over the entire range, and plot the data one side of the spiral by using the abs() value and a color to signify sign.  Then, scale the vector by response and plot.  A simulated example is shown on the right.

We will cover the mapping real world time series data (as shown in the first graph on top) on to the spirals in next article on Spirals.