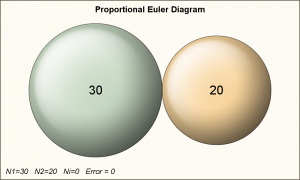 I was interested in a graphical representation of the number of different types of subjects in a study, say subjects with Diabetes, or Hypertension or both.   It turns out, Euler Diagrams do represent the real world data, and not all theoretical combination.  So, it would make sense to draw a Proportional Euler Diagram.

I started with the simple 2-Set case, as it seems achievable.  The results are shown on the right.  The values for N1, N2 and NI are also 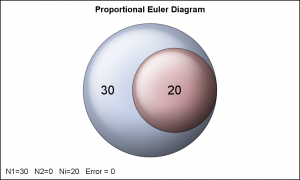 shown in the footnote, along with the value of the convergence error.  The two special cases are shown on the right, and are straightforward.  Click on the graphs for a higher resolution image. 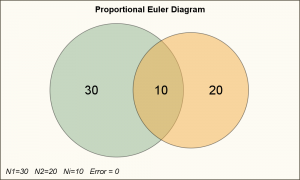 In all cases, the radius of the larger circle is set to 10 (arbitrary), and I compute the area of the smaller circle proportional to the number of observations in the circles.

Here are the details of my program:

Here is the algorithm:

I assume convergence is reached, and based on this value of v, I compute the horizontal distance from center of each circle to the intersection, d1 and d2 and other numbers needed to plot the details.

I can use the ELLIPSEPARM or BUBBLE (RelativeScale=False)  statement to draw the plot.  However, SGPLOT procedure does not support these statements (not in the 80-20 range for simple plots).  So, I used GTL, with the BubblePlot because I wanted to use skins.

I made it into a macro, with three parameters N1, N2 and NI.  Skin is optional.  If you have a need for Proportional Euler Diagrams in your work, please chime in and let me know if this is useful to you.  Maybe you have made one of your own and I would love to hear how you went about solving for the intersection areas.

VENN diagram shapes for 2, 3, 4 and more sets are available on the web, would be possible to make these using EllipseParm statement for both circles and ellipses.

I plan to tackle the case of the 3 set Proportional Euler Diagram.  This same algorithm may not extend to this case.  I would love to hear your ideas.