Often, the topic of an article is motivated by a question from a user.  A satisfactory resolution of the situation is usually a good indication of a topic that may be of interest to other users.  On such question was posed to me by a user this weekend.  He wanted to display fit curves in a graph by group with the curve labeled all along its length by a one letter identifier. 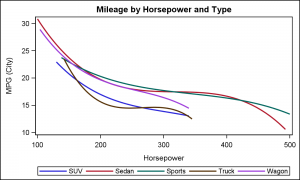 This seems like a useful way to label a curve, as sometimes placing a label at just the end of the curve can be less than optimal.  When using a simple series plot, this is straightforward, and a short, one or two character label can be placed at intervals along the series.

But, what if the curves are fit plots, say a PBSpline or a regression?  Now, the plotted data is not the same as the original data.   Here is an example of curves of Mileage by Horsepower by Type.  We have used DEGREE=3 just for illustration.  The legend provides the decoding information, but it is less than ideal to refer back and forth to the legend.  Click on the graph for a higher resolution image. 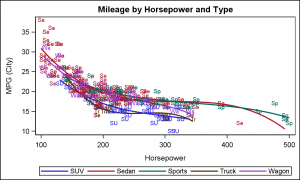 Now, we want to add a short code representing the vehicle type at equal intervals along the curves.  First, we extract the label to be displayed as a 2 character abbreviation of the type.  Now we use the Scatter plot with marker character option to display the short label at each observations:

To do this, we have to use a two-pass process.  First, we run the SGPLOT procedure to draw the fit curves, and also request output of the generated data using the ODS OUTPUT data set as follows: 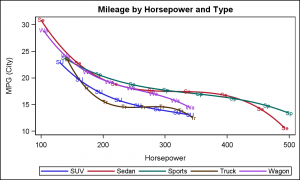 For ease of use, we rename these generated column names to something simple like X, Y and Group.  Now, we know the data used to plot the curves, so we can use this data to display the 2 character code along the curve.  We ensure the data is sorted by Group and Horsepower, and create a 2 character code for every 30th observation.  Then, we use the scatter plot with marker character to plot the labels. 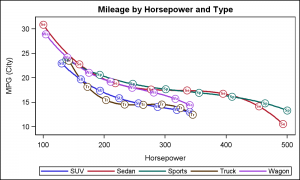 While we have achieved what the user wanted, but the overlaid curve labels look a bit cluttered.  One way to improve the appearance would be to add small scatter markers at each location, and draw the label inside it, as shown below.

Now each abbreviated label is clearly visible, and the graph does not look cluttered.