One of the most popular graph amongst clinical and pharmaceutical users is the Survival Plot as created from the LIFETEST Procedure.  This is one graph that users most often want to customize.  See Creating and Customizing the Kaplan-Meier Survival Plot in PROC LIFETEST - Warren F. Kuhfeld and Ying So, SAS Institute Inc.

The original graph template was created using SAS 9.2 feature set.   With SAS 9.3 and SAS 9.4, we have added new features to make creating such graphs easier.  Let us see how you can do this, given the data needed to create the graph.  As you will see in the attached full program code at the bottom, I have run the example 49_2_1 from the documentation for the LIFETEST procedure to create the data set necessary for the graph Here is a snippet of the output data set. 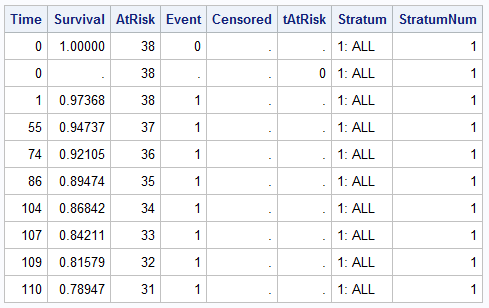 The data set has data for Survival by Time by Stratum.  The data set also contains separate columns for the AtRisk values and the tAtRisk.   We will use these columns to create the graph.

Using SAS 9.3, creating the basic graph of the survival curves showing survival by time by stratum is straightforward.  This can easily be done using SGPLOT, but since we want to add the At-Risk values, let us use GTL.  Here is the graph and the GTL code.  Click on the graph for a high resolution image. 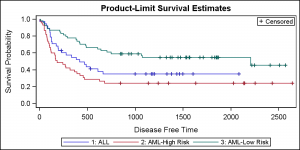 As expected, we have used a STEPPLOT statement to plot the survival by time by stratum.  Two scatter plots are used to overlay the censored observations.  One without group is used to include in the inner legend.  The second one with group overlays on the first, and displays the same markers with color.  The step plot is included in the legend at the bottom of the graph.

Now, let us add the display of the AtRisk values to this graph.  This can be done in different ways.  First, let us use the BLOCKPLOT in an INNERMARGIN of the graph itself.

SAS 9.3 Survival Plot with AtRisk Values inside the plot: 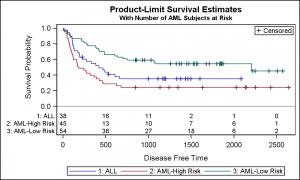 Note in the graph above, the At-Risk values are displayed closer to the curves, without any distracting axis and legends between the values and the curves.  This is actually better for decoding of the information requiring less eye movement to line up the values.

However, it is noted that the standard practice in the industry is to place the AtRisk table values outside the graph, below the x axis and the legend.  This is easily done using the following modification of the GTL code shown below.

SAS 9.3 Survival Plot with AtRisk Values outside the plot: 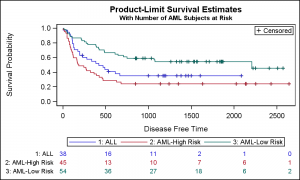 Note a few features of this program:

Now, let us see how much easier this is using the new AXISTABLE feature in SAS 9.4.  The AXISTABLE is a new statement in GTL and SGPLOT that makes is easy to display tables of axis aligned data.  We can create the same graph using the SAS 9.4 SGPLOT procedure with the AXISTABLE. 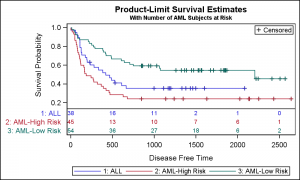 Note, the XAXISTABLE is placed inside the graph, in the INNERMARGIN as shown earlier.  Both the at risk values and the labels outside the Y axis are color coded by stratum.  The order of rows is right by default and a separator is used between table and graph. 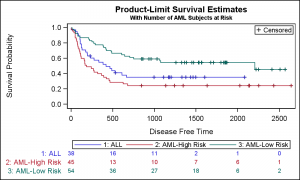 Note, here the XAXISTABLE is placed outside the graph.  Both the at risk values and the labels outside the Y axis are color coded by stratum.  The order of rows is right by default.