A graph in a recent article in Fortune magazine caught my eye.  The graph shows the cost of hosting the Summer Olympics over the past eight events.  Here is what I termed the "Medal" graph. 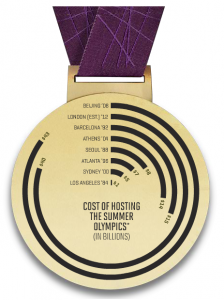 Now, practitioners of the art of Effective Graphics would likely find some shortcomings in the graph.  Clearly it has been created keeping the subject matter in mind, and plotting magnitudes as angles around a circle like a pie chart leaves something to be desired.

But there appears to be something amiss about this graph which will become more obvious after seeing the traditional representation of the data as a bar chart below.   We'll return to this matter later in the article.

Let us take this opportunity to talk about a new feature in SAS 9.3 SGPLOT VBAR / HBAR  statements called CATEGORYORDER= RespAsc | RespDesc.  This feature supports sorting of the categories by the final response value of the bars.  To create the graph, I created a SAS data set with two columns, one for Event name and one for Cost.  Using SAS 9.3 SGPLOT procedure, here is the graph using a horizontal bar chart. 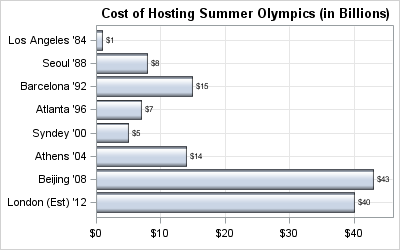 Note, the HBAR statement in SGPLOT automatically reverses the Y axis so the first observation is drawn at the top, with subsequent ones drawn below.  This is also true for the DOT plot.  Also, by default, the bar chart places the axis values using an ascending sort.  So, to get the bar chart above, where the the categories are in data order you have to set the Y axis DISCRETEORDER=Data.  This graph provide a good view of the progression over time of the cost for holding the Olympics.

Now, let us use the new option CATEGORYORDER to order the bars in Descending or Ascending order of the bar magnitude.  This feature is very useful, as the categories are ordered by the final bar response value after summarization. 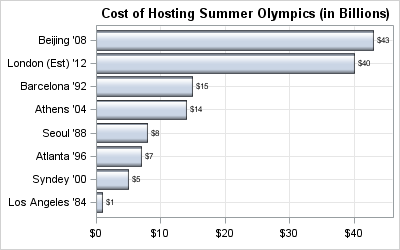 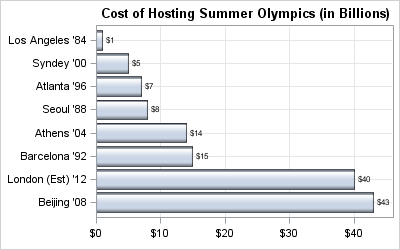 Now, let us get back to the question I had about the "Medal" graph.   Somehow, to my eyes, the longer bars representing each event seemed too long.  This is particularly reinforced by comparing the Medal Graph with one of the bar charts above.  In the Bar charts, the bar for Beijing (43) is about 5 times longer than Seoul (8) as expected.  But, in the Medal Graph, the bar for Beijing looks inordinately long - because IT IS.

The length of each bar in the Medal graph is a combination of the angular value TIMES the radius.  In this graph, it appears the angle subtended at the center is proportional to the cost.  So, that part is fine.  But, in this case, my eye is really drawn to the length of each bar, which gets longer as you go to the outer edge of the medal.  The radius for Beijing is about twice the radius for Seoul, so now with the proportional angle, the Beijing bar (or arc)  is really 10 times the length of the Seoul bar.  This is borne out in the graph below, where we have normalized the unrolled length of each bar to 43 (cost for Beijing), so now the Seoul bar has a length of 4 compared with its actual value of 8.

Using equal stepping of radius from 1 to 8 (number of observations), and cost as a fraction of max cost (Beijing) , I computed the bar lengths=angle*radius and normalized it to 43 to match the Beijing cost.  Then, I plotted the actual cost, and the unrolled length side by side in the graph below.  I dimmed the actual cost bar to see the unrolled values more clearly. 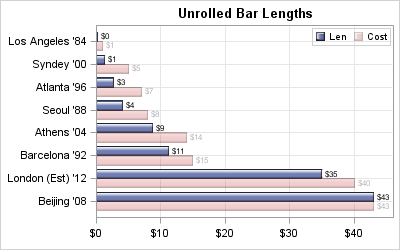 Since I normalized the unrolled length values to the Beijing cost (43) we can see the Medal graph under represents the smaller values due to the changing radius of each arc.  Shields up - fire at will - Scotty - More power to the shields!

In the above graph, we have used the ability to place two different responses side by side using the DISCRETEOFFSET feature, and used TRANSPARENCY to dim one of the bars.