This post is a result of an intriguing question posed by a user on the SAS communities' page.  How to create a bar chart where the category is a combination of two variables var_1 and var_2 (each with values of '+' and '-'), and get a X axis that shows each variable individually? 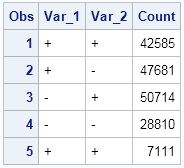 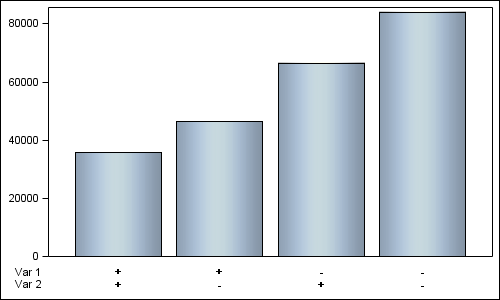 Note the x-axis.  The graph has a bar for each possible combination of var_1 and var_2, but the x-axis label is split up to show each value of the two variables, and also the variable names on the left.

Yes, this graph is actual output from SAS 9.2 using GTL.  How did I create this graph?  Here are the steps, and the full SAS 9.2 program is attached below.

This is a good example of creative usage of GTL statements to achieve the results we want.  Here is the full SAS 9.2 code:  SAS92

Now, here is a sneak preview of how easy this is with SAS 9.4 code.  We have added a new feature to the DiscreteOpts TickValueFitPolicy called "SplitAlways".  Using a blank as the split character (default) the new var values can be split into multiple lines on the axis to show each value separately, and the variable labels can be added using the DrawText statement.  Only a simple Layout Overlay is needed: 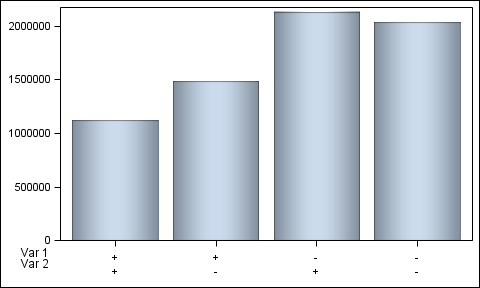 This time, we only need to concatenate the var_1 and var_2 with a blank as delimiter using the CATX() function.  No additional data is needed.