Did you know that more than 30,000 Americans die in traffic accidents every year? Interestingly, the U.S. import of mangoes from Brazil is found to be highly correlated with this fatality rate, as shown in the graph below.  But are mango imports a good indicator of the future traffic fatality rate? The answer is obviously, “No!”, but it does illustrate well that correlation does not always imply causation. The importance of this premise is critical in understanding marketing response models, which predict if the receipt of a marketing offer incents customers to buy more products. 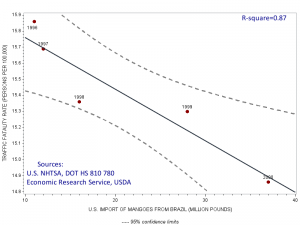 Traditional response models score customers based on their likelihood to purchase so that marketing campaigns can be targeted towards those customers who will maximize the response rate. Although correlation may exist between the response rate and marketing incentive, traditional predictive models fail to address if the response rate was caused by the marketing campaign, because they cannot distinguish between customers who would have responded positively regardless of the marketing offer and those who responded positively only because of the offer. Clearly we only want to target the latter group to measure the extra revenue they generate.

Causality can be established and isolated from correlation by using incremental response modeling[1]. Application of this modeling technique requires designing an experiment where you categorize a group of randomly selected subjects into treatment and control groups. While the treatment group receives a “treatment” (e.g. a marketing offer), the control group does not. Ideally, the subjects in the two groups are identical, so any difference in outcomes between the two groups can be attributed solely to the “treatment.” We then isolate the effect of the treatment by assessing how the two groups reacted.

Incremental response modeling is an advanced modeling technique designed exactly for this purpose, because it enables one to measure the incremental impact of a certain “treatment” (e.g. the incremental/additional revenue that was generated because of the marketing offer). This functionality (available in SAS® Enterprise Miner™) is a convenient way to build models that can predict the incremental impact of an action by measuring the difference in outcomes between the treatment and control groups.

Benefits from this type of modeling can be seen in a diverse set of applications:

In essence, incremental response modeling could be applicable in any experimental design where treatment and control groups can be identified to measure the incremental impact of a certain action. At SAS I have worked with several universities to identify additional admissions that could be generated by targeting fellowships or other financial aid (“treatment”) to the right prospects. This practice leads to better distribution of the limited fellowship resources among prospective students that will be impacted the most.

To underscore, correlation doesn’t imply causation! In the context of mango imports and fatality rate mentioned in the opening paragraph, the incremental change in fatality rate for a controlled experiment would certainly be zero, revealing that the relation between traffic deaths and mangoes is correlation only.

The paper Using Incremental Response Modeling with SAS® Enterprise Miner™ shows how this technique can lead to powerful decision making in variety of applications, thereby helping you gain that extra competitive advantage. So use your budget strategically. Start leveraging the power of SAS for incremental response modeling with prospects where the incentive will be the tipping point that influences their decision. 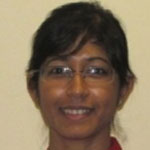