Are you ready for the upcoming International Year of Statistics? I have prepared myself by doing a correspondence analysis. Excusez-moi?

Correspondence analysis is a technique that has been very popular in France and is therefore sometimes referred to as French Statistics.

Correspondence analysis is a technique for categorical data analysis. It maps the associations between rows and columns in a frequency table graphically, as points in a space of few dimensions.

The advantage is that no distributional assumptions are necessary, unlike classical techniques involving inference to population parameters. The main objective is to discover the structure inherent in the data.

As last week, like every first week of December, all roads led to Oslo and Stockholm for the Nobel Prize Award Ceremonies, I decided to apply the correspondence analysis to the list of Nobel Prize winners by country found on www.britannica.com.

Since 1901, the Nobel Prize has been awarded to men and women from all corners of the globe for outstanding achievements in physics, chemistry, physiology or medicine, literature, and for work in peace. In 1968, economic sciences were added to the list of fields.

For my analysis I selected all countries with at least one Nobel Prize in each category.

What do we learn from the two-dimensional plot? 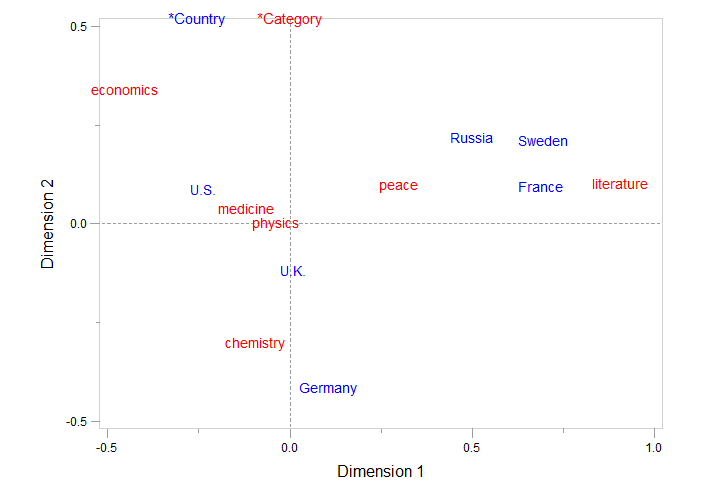 The positions of the points indicate that Russia, Sweden and France are associated with peace and literature, whereas Germany is situated closer to chemistry and U.S. and U.K. are the countries closest to medicine and physics.

It should be emphasized that correspondence analysis may suggest patterns of association among the variables but it does not establish whether those patterns are significant.

How to obtain this two-dimensional plot?

If you want to run the analysis yourself, just copy and paste the SAS code below.

This program reads the country and category data into the data set nobel and calls the corresp procedure. To input a contingency table in the corresp step, the categories (columns) are specified as the variables in the var statement, and the countries (rows) are indicated as the ID variable. This example illustrates the use of the annotate facility with proc gplot to produce a labeled display of the correspondence analysis solution.

Want to learn more about statistics?

If you want to prepare yourself for the International Year of Statistics, take a look at our statistical courses. 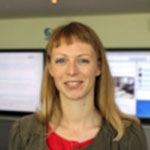