The Internet has been around a long time. "Things" have been around even longer. Put the things on the Internet, aka the Internet of Things (IoT), and you get so much hype that IoT is at the top of Gartner's "Peak of Inflated Expectations" – and poised for a fall into the "Trough of Disillusionment." 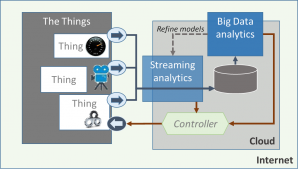 In spite of the predicted hype deflation, the things have a lot to offer the Internet and not just notions of more big data, faster. Streaming data is part of the nature of things, and event stream processing can help by analyzing those streams in-motion.

To understand why streaming analytics is so important to IoT, you have to look past the "billions and trillions" talk, and look at the architectural fundamentals of IoT. Things stretch the Internet and stress IT infrastructure because their nature is new and different. Consider these characteristics of the things in the Internet of Things: 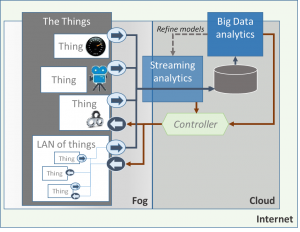 Things in the Internet of Things can communicate directly with each other within the fog, without talking to a server in the cloud. In a LAN of things, like a connected car, things talk directly to other local things. Streaming analytics can process events in the fog and in the cloud.

IoT is one example of computing's long trend away from the UNIVAC days of a single computer occupying an entire basement of a university building and only accessible to highly specialized technicians. These things are right where the action is. And while they contribute to the big data of a distant cloud data center, they are not themselves repositories of big data.

Things are the headwaters of streams, as previously described, and are like the many feeder streams of the Amazon River basin. The things must meld to the real, physical terrain as it exists. While they may feed into a "data lake" they aren't usually data lakes themselves. Things are like the crest of a waterfall -- they induce flow rather than contain volume.

By tapping directly into these data streams, event stream processing gives you analytics right where you need it. It complements traditional big data analytics by distilling data in-motion so that traditional analytics can be more valuable. SAS Event Stream Processing can even help actuate things in real-time and aid in detecting security anomalies or other patterns of interest. In the cloud or in the fog, SAS Event Stream Processing brings clarity to things.