The Amazon River starts as a small glacial stream, pictured at right, on a mountain called Nevado Mismi in the Peruvian 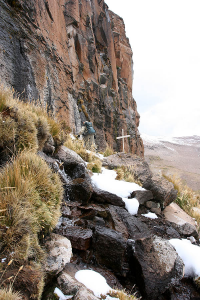 Andes. This, and many other small streams, lead to over 1,000 named tributaries of the largest drainage basin in the world -- and the greatest diversity of life on our planet.  Like the Internet of Things (IoT), the Amazon basin is a gigantic network of streams. The Amazon streams push water forward towards the Atlantic, while the IoT data streams are pushing industries to new levels of efficiency and effectiveness.

With enough trekking equipment and expertise, you can visit many of the streams in the Amazon basin. If you have video, audio and transmission equipment, you can broadcast the sights and sound in real-time across the Internet -- from the rush of snow melt over rock in the Andes to a bubbling piranha attack half a continent away.

If you have the power of flight, you can zoom down more than 16,000 vertical feet from Nevado Mismi and traverse hundreds of horizontal miles to the Meeting of the Waters, shown below -- where two of the largest rivers in the world merge but don't combine. Differences in temperature and flow rate keep the waters separate for several miles. If you fly really fast, in an instant you can be 100 miles beyond the mouth of the Amazon in the Atlantic, where you still float in the Amazon's fresh water even though you can no longer see South America. 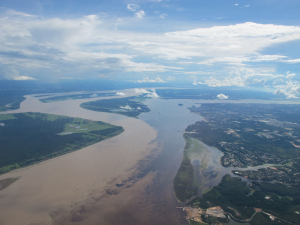 If you have the power of time travel, you can stand on dry ground in the rain forest during the dry season and instantly travel back to be covered in 40 feet of water during the last wet season. If you have the power of analytical forecasting, you can move forward to an immersive projection of the next wet season. In either case, bring scuba gear.

You might see an Amazon river dolphin swim by, shown at right. If they 'see' you, it is with sonar. 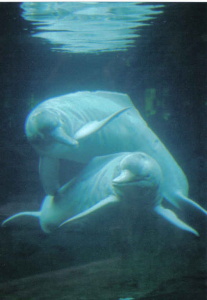 The muddy waters are best seen by our mammalian cousin at different wavelengths then we use. With their intelligence, they thrive in the complex n-dimensional maze of the many streams and currents of the flooded forest.

The IoT, like the Amazon, is inherently streaming. Sensors aren't meant to hold their data any more than the crest of a waterfall retains a history of all of the water that ever fell over it. The data continuously moves on. It combines in to larger flows that describe even greater systems of networks. Like the IoT, the Amazon streams of water have effects at the micro level and the macro level. At a micro-level, individual water molecules cross cell membranes of microbes, and travel up to the tops of trees. At the macro level, the aggregate force of over 7 million cubic feet of water per second pushes sediment clear out in to the Atlantic – the Amazon doesn’t form a true river delta like the Mississippi or Nile. While the IoT may never reach the complexity of the Amazon river basin, it could one day evolve its own digital analogues to the Amazon river dolphin. And the piranha.

By using the techniques of virtual reality and gaming, you can have all of the super-powers described above. You can fly, teleport and time travel through your data. The virtual world could even emulate the eco-location of the Amazon river dolphin. But while the streams in such a virtual rendering of the Amazon would stay true to the laws of the real world, such as gravity and physics, a data world of IoT streams doesn't necessarily need to imitate the laws of nature in any way. You are free to render your many IoT streams in to the infinite space of a data world in any way that you like, in actionable real-time.

Given the superpowers that come with advanced gaming techniques along with freedom from the laws of physical nature, what would IoT streams look like? What would they sound like? What would they be like? These are some of the questions to ask as you design your organization’s visualizations of IoT.