In recent conversations with many SAS users at NESUG, SESUG and WUSS, a pattern emerges on the question of creating graphs with SAS or R.  Many SAS users are aware of the new graph features in SAS that create high quality graphs with minimum fuss.  But, many have not actually used these new features.

The SG Procedures provide a simple way to create commonly used graphs, and GTL provides a structured approach to build complex, intricate graphs.  Many such graphs have been presented in this blog.

Many SAS users continue to use R to create graphs, and there is nothing wrong with that at all.  Users should use the tools that make their task easier.  However, I figured it could only help for me to gain some hands-on insight into R graphics using the popular GGPLOT2 package.

Here I present some graphs I made using GGPLOT2, and similar  graphs using SAS.  The default settings for both systems are different, so they each produce good graphs with minimal code in their own style.  Here I went the extra mile to make the SAS graphs look like the R graphs for ease of comparison.  This adds a little more code.

I created a Style called Styles.R, which mimics some of the R settings.  Then, I used built-in data sets both in R (Diamonds)  and in SAS (sashelp.cars and sashelp.heart).  In both cases, I wrote CSV files, and imported the data into the other system.  I made the SAS graphs use the same colors as GGPLOT2 because it was easier for me.  I am sure we can easily go the other way too. 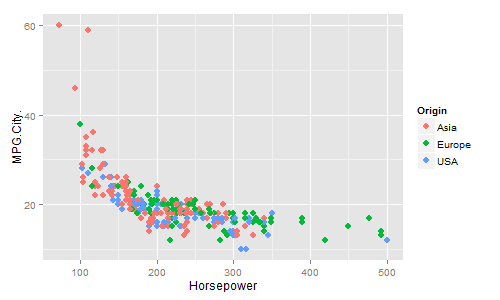 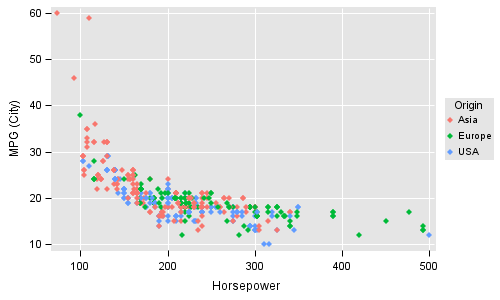 In the above code, I set the three colors to match the colors from GGPLOT2 using the SAS 9.4 STYLEATTRS statement.  You can also do this in the style itself.   Scatter markers can also be colored using a gradient ramp.  In the following example, I used the Diamonds data set from R. 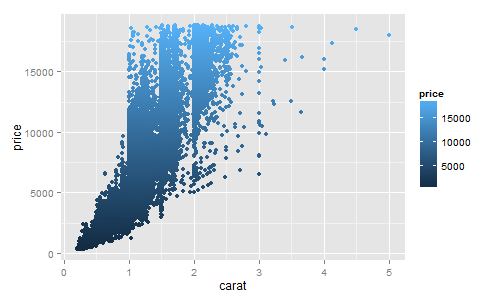 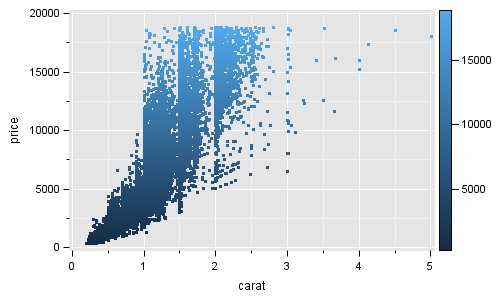 The SGPLOT procedure does not support the MarkerColorGradient feature.  So, in this case, I used GTL.  I also went the extra mile to turn on the minor grids, and change the minor gridline color to match R.  The full code is attached in the file below.

In this example, I have used the %RGBHEX macro supplied by Perry Watts in her paper "Defining colors with Precision in your SAS/GRAPH Application"

The Box Plot examples shown below use a subset of the Diamonds data set: 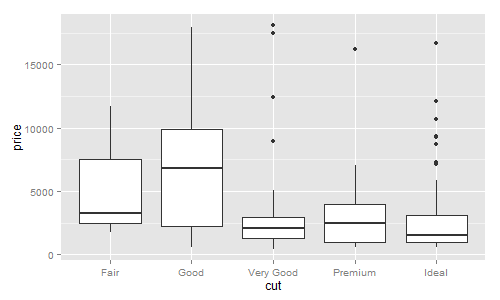 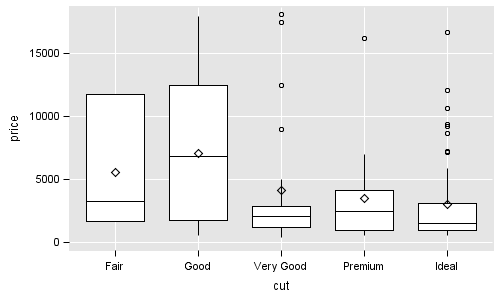 Note some differences in the computation of Q1 and Q3 when number of observations for a category are small.  GGPLOT2 does not show the mean marker by default.

A few weeks back I wrote an article on Comparative Histograms where I discussed mirrored or overlaid histograms.  Here are similar graphs using R and SAS.  With GGPLOT2, you can display histograms with group as shown here.  Histograms from multiple columns can also be overlaid, though I had some trouble getting the legend to draw in this case.  At this time, SAS does not support grouped histograms, but you can reshape the data into multi column (one for each group value) and use histogram overlays to create the same graph.  We will add support for grouped case in a future release. 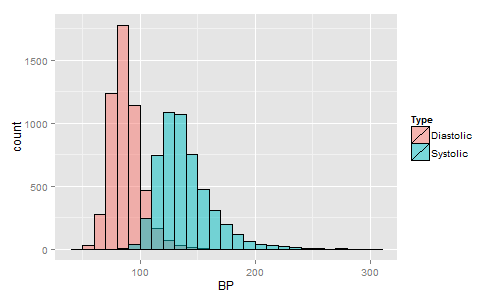 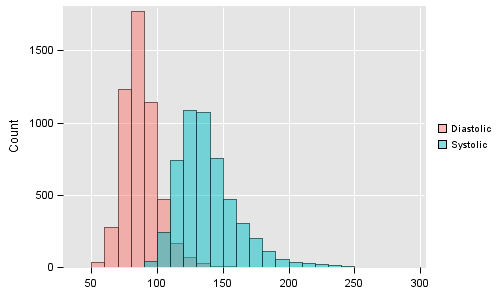 Note, some extra options are used to mimic the GGPLOT2 look and feel.  Also for the R graph, I have enabled the bin outlines.  Colors and attributes can be set in a style, or you can use the SAS 9.4 STYLEATTRS statement for convenience.

I have only just started learning GGPLOT2.  However, it appears that GGPLOT2, SGPLOT and GTL all philosophically use similar layered approach to build complex graphs.  Simple graphs are easy, and complex graphs are possible.  GGPLOT2 syntax leans towards brevity while the SGPLOT and GTL syntax is more structured and verbose.  Each have their advantages.

If you have a favourite graphs created using GGPLOT2 that you would like to create using SG procedure or GTL, please feel free to share the graph and (preferably) the data so we can give it a go.