CTSPedia.org is a website of Knowledge Base for Clinical and Translational Research.  On this site you can find sample graphs for statistical analysis of safety data for Clinical Research.  Graphs included in this resource have been submitted by contributors, and include a graph for Liver Function for different tests by treatment.

This graph shows a panel of scatter plots showing the maximum upper limit of normal (ULN) value of a test over the treatment period plotted against the upper limit of normal for baseline, one for each test.  The SGPANEL procedure is well suited to creating such graphs and the graphs shown in the link above can be created using a few lines of code. 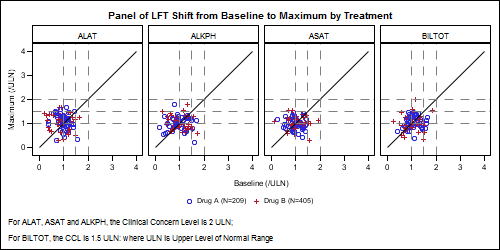 The data for the above graph is simulated.

The SGPANEL procedure creates a paneled graph with a grid of cells using one or more classification variables specified on the PANELBY statement.  The procedure determines the number of unique values for each class variable, and creates a cell for al crossings of the panel variable values.  Each cell contains a graph for the subset of the data for the crossing, and the plots in each cell are determined by the statements that are included in the procedure step.

Let us review the statements and options used in the above code:

Many pages of code are replaced by a few lines shown above.  An extra variable "Ref" is added to draw 45 degree reference line.  With SAS 9.3, one can use the new LINEPARM statement to draw this line without need for generating data columns.

In the above case, we forced the layout to a 1 row x 4 column layout by setting COLUMNS=4 on the PANELBY statement.  Creating the 2 x 2 layout is even easier, as that is the normal behavior of the SGPANEL procedure. 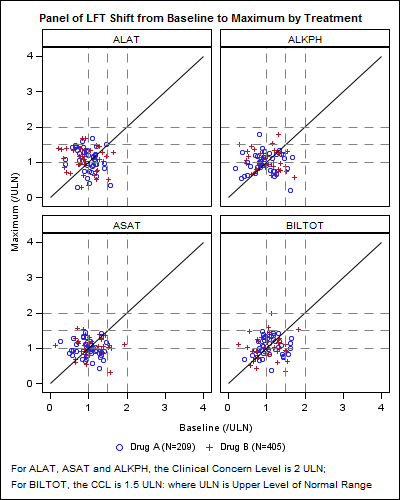 Note, the code is almost identical to the one shown above, except for the lack of the COLUMNS=2 option.  Judicious choice for graph width and height will result in a square aspect ratio for each cell.  Options are available in GTL to get specific aspect ratio for the plot region and are planned for SG in the next release.

A style template is used only to fit the title and footnotes for the small size graphs in this article.