In December of last year, the book "Statistical Graphics Procedures by Example" co-authored by Dan Heath and I was published.  On the back cover, it proclaims "Free Code on the Web".  Now, who can resist such an offer?   Since most of the examples in the book have very short syntax, we put all the data sets used in the examples in the downloadable file, but no sample code.

Well, this did not fly, and we got multiple requests from readers for sample code.  Chapters 12 and 13 of the book include many industry specific graphs for the Clinical and Business use cases.  The examples in these chapters show the SGPLOT procedure code needed, but not the rest of the code needed to prepare the data for the graph.  Also, some graphs use macro variables that have to be set up in such code.

So, we decided to add these samples to the downloadable file and I thought it would be a good idea to share them in this blog for wider distribution, starting with the Forest Plots from Figures 12.2 and 12.3 in the book .

Note:  These samples show how to create such graphs using the SG procedures (the topic of the book).  Some graphs may be better done using GTL.  Where appropriate, I will also post the GTL version.

Here I have included SAS 9.2 and SAS 9.3 versions.  When I first did the graphs using SAS 9.2 (eating ones own dog food), some gaps in the features came to light that were addressed in SAS 9.3.  So, the SAS 9.3 version is genearlly easier to code up.

The data is as shown in the table above. 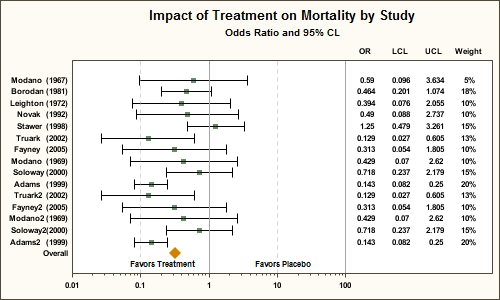 The key feature is the splitting of the width of the graph into the graph area on the left (on X axis) and the table on the right (X2 axis).  Other steps in this graph are as follows:

I also used a reference line to draw faint alternate bands to aid the eye across the width of the graph.  A Macro variable is used to set the thickness of this line.  This part can also be done the same way in the SAS 9.2 version. 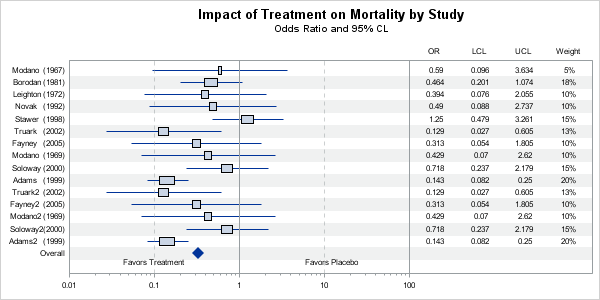 The SGPLOT procedure is ideal for single-cell graphs.  To create the effect of a multi-cell graph,  I have used the axis splitting technique to create the appearance of a graph cell on the left and table cell on the right.  An actual multi-cell graph can be created using the LAYOUT LATTICE statement in GTL, and may really be a better way to do this.  I will post an example of that in a subsequent article.