It's a busy time in gyms and on the greenways as people embark on this year's resolutions or better yet, goals, to become healthier this year.  For those who are grumpy about traffic in the gym, consider that you too were once in their shoes and be kind.  Whether you are weight lifting or running, we all had to start somewhere and there's nothing like a dash of inspiration to get you started...or keep you going!

I'd like to introduce SAS Pune Research and Developer Roshan Jha.  A self proclaimed running enthusiast, Roshan not only loves endurance running himself, but also enjoys helping co-workers and friends complete 5Ks to half marathons.  From this joy, he's extended his support to children with visual impairment.  Roshan is proud that he's trained 82 girls to complete 5 and/or 10Ks in Pune, Mumbai, and Bengaluru as well as managed the allocation of sighted allies for each visually impaired runner.  Most recently, Roshan joined the Armed Forces Running Club as a mentor to help encourage and train the families of the Armed Forces in Pune.  I've enjoyed Roshan's inspiring posts on SAS's social media platforms and I thought I'd share his story with you today.

This post was originally featured on Roshan Jha's Personal Blog on January 10, 2019 and was written by Roshan Jha. 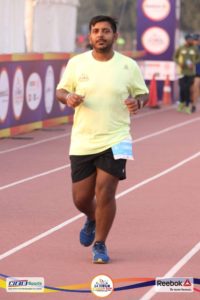 My running journey started in July 2014 and since then I have participated in several races in India. With good mileage under my belt, I took up the challenge of running an Ultra Marathon.

It was 30th July 2017 when I went out for a hill run and returned with an ankle injury. While the recovery was on track, I was hit again, this time with infection in lungs which damaged the airways of my right lung and left me hospitalized for a week. The heavy medicines and 9 month lay-off from physical activities significantly affected my fitness level.

I started developing self doubt and wasn't sure I would be able to run again. Doctors gave me green signal in March 2018 to start running (provided I wear a mask). I still remember my first post recovery run.  Trust me, I couldn’t run 1K. With each stride, my heart rate was crossing the 180bpm mark. At this point, my self doubt reached a new level, leaving me in tears.

I spoke to one of my friends & colleagues, Taniya Raina, and shared my agony. She suggested that I get back to running despite of what time of day I went. It was a much needed push and it helped me take that first step again. 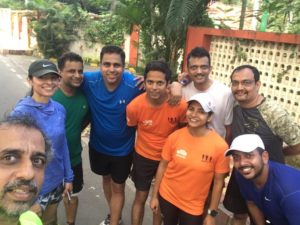 My first goal was to get back to the routine so I decided to start weekly group runs with my colleagues & friends. The weekly group runs with SAS Research and Development India (SRDI) folks helped me to follow a routine and provided discipline. It was as good to be making good habits. Outside SAS, I had Zareen Siddiqui (an online nutrition and core fitness coach) with me and joined me in all of my long runs.

To ensure that I didn't log unnecessary miles and to help me with a structured plan, I decided to train under Coach Anand Takale from Running Potential - a locally formed group by athletes to train amateur runners like me.  Coach Anand came to the rescue!

The training started in April 2018 with the first 2 months focused on the base building driven purely by heart rate training. Gradually, the plan reached an intense and demanding training schedule.  September - November 2018 was the period where my training intensity peaked. I completed back to back long runs on consecutive days (generally on weekends) and most of those were solo.

I decided to participate in 12-Hour Stadium Run in New Delhi, which was scheduled on 16-Dec-2018 (7am to 7pm). The longest run I had done during training period was 50 kilometers.  My training plan included running in late morning hours to ensure I'd get a feel of being under the sun.  With good number of miles under my belt, I went to New Delhi for the Ultra Marathon.

Running for 12 hours on a 400 meter track was challenging both mentally and physically, and, thankfully, my coach considered this factor while designing my training plan.

The flag off happened at 7:00 am and the athletes were required to be on the track until 7:00 pm. Lanes/tracks were assigned to runners and we were not allowed to switch between the lanes/tracks.

After every 4 hours, we were required to change the direction  from clockwise to counterclockwise and after 6 hours, a required medical check-up (weight, blood pressure, sugar) was performed.  The first 4 hours went well and, per my suggested plan, I was on track. However, 11:00 am to 4:00 pm were particularly challenging due to the scorching sun. I was in two minds as to whether I would be able to survive until 7:00 pm.  Fortunately, I was carrying my cell and I called up my coach to brief him about the conditions. His suggestion to “run at conservative pace” helped me to negotiate with heat while keeping the legs moving on track.

Though I was consistently following the race plan, I had some fears in my mind like "What if I get cramps?" "What if I pull my hamstrings or calf muscles?"  I covered 61K in 8 hours with no signs of injury. The next 4 hours were crucial and required even more mental and physical strength.  I was keeping a close watch on my hydration and re-fueling and I knew that I wouldn't be without fuel. I covered the last 4 hours with a consistent pace - similar to what I had been training since April 2018. 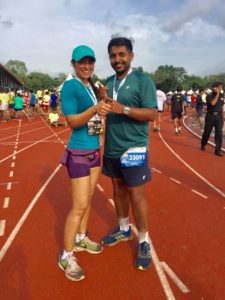 By 6:00 pm, I'd covered 81K and in that last hour, I pushed a little harder and ended up logging 90K+ (some 226 laps of 400 meter track) in the 12 hours.  That moment crushed all the doubts I had in myself. I was extremely happy to regain my confidence.  I trusted the process, I followed a plan, God was kind and friends were equally supportive. A big thanks to all those people who were part of my journey!

Fitness is a journey, not a destination. Stay active!'

Check out Roshan and the SRDI Runners on Yammer!

Amanda received her B.A. in Exercise and Sport Science from the University of North Carolina at Chapel Hill. At SAS, she has shares her passion of wellness with SAS employees as a Senior Recreation and Fitness Program Coordinator. When she’s not teaching others how to squat, chaturanga, and run or coaching expecting moms and Ironmen-to-be, you’ll find her exploring the outdoors with her husband, two sons, and schnoodle, cooking, propagating succulents, and training for endurance events. She’s a 2x IRONMAN finisher and multi-marathoner who loves to be on the trails or on her yoga mat! Amanda is registered through Yoga Alliance as an Experienced 200 hour Yoga Teacher (E-RYT200), certified in personal training and group exercise instruction through the Aerobics and Fitness Association of America (AFAA), an IRONMAN Certified Coach and has training in prenatal yoga, Cosmic Kid's Yoga, and as a postpartum doula.