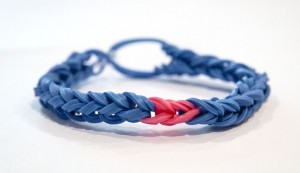 Pink and blue.  These colors are often synonymous with gender. In fact, when I was pregnant 16 years ago, we had no idea of our baby’s sex. At the shower, we received lots of blue, green and yellow clothing, but no pink. It’s interesting how blue can represent both male and female. When our daughter finally made her grand debut, albeit 12 days late, there was a pink card in her nursery bassinet and an abundance of pink balloons, streamers and congratulations.

The way that things evolve and become what they are just fascinates me. I wanted to know where this pink ritual came from, so I checked some reputable resources. In the early 1900s, when color started making its way into clothing, pink was actually affiliated with boys. Pink was considered the stronger color while blue was dainty and retailers in big cities were happy to accommodate. It wasn’t until the 1940s that pink was promoted as feminine. Over forty years later, the pink ribbon as we know it today was born. What’s interesting is that the original breast cancer ribbon was actually peach, not pink. Pink was determined to be the quintessential female color, so with the launch of the Breast Cancer Awareness campaign, the pink ribbon became the symbol. 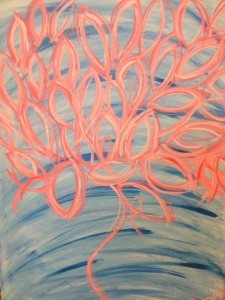 As we meander into stores and view media – including NFL games – throughout October, pink ribbons shine as the beacon of hope and support.  Although we relate it to women, these carefully coiled strips of fabric can represent men as well. Did you know that men can get breast cancer too?
The American Cancer Society estimates that in 2015, there will be ~2300 new cases of invasive breast cancer in the United States in MEN! Many are diagnosed late because they don’t perform breast self-exams or receive screenings. These recommendations are made to women, but we don’t hear them being made for guys even if they have a close relative, parent and/or sibling who has been diagnosed.It’s estimated that close to 400 men will lose their life to this disease in 2015. When I tell people about this, they are shocked that men can get this diagnosis. To shine some awareness, let’s first look at the evolution of the male breast. This is when my undergrad of chemistry and genetics courses come in handy. All embryos begin as female, believe it or not. In the sixth week of conception, the male chromosome activates. Nipples and breast tissue in men are remnants of their female beginnings. Although not functioning, men can develop breast cancer.

When I was a very little girl, my great uncle was diagnosed with breast cancer. I was too young to comprehend and it appeared to be a fluke to many family members. It wasn’t until multiple females were diagnosed with both breast and ovarian cancer that we started to question why. In 2006, my aunt was diagnosed. This was way after my mom was diagnosed at 42, so we sat down and created a family tree to determine the extent of diagnoses. To give you an idea of just how our tree looks, think of pink (for breast cancer) and teal (ovarian) raindrops falling from the sky. There are only a few untouched leaves in our grand oak tree. We discovered the BRCA genetic mutation was responsible for our history. As we were told the information, the genetic counselor said that having the BRCA mutation is not common (1 in every 500). That tidbit of information wasn’t helpful at the time!

The BRCA (BReast CAncer) genetic mutation puts both men and women at an increased risk of getting breast cancer in their lifetime. For men with the BRCA1 or 2 mutation, the risk is 2 -~10%. This is in contrast to a 0.1% risk in men without the mutation. For women, the risk can run as high as 80% depending on which mutation they have. Because the statistics for men and women are so different, men get lost in the mix and promoting awareness to them isn’t emphasized. It should be!

To raise awareness in this pink world that men live in, I wanted to shed some light on the Pink & Blue project as well as the Pink & Blue documentary. The film is slated for an east coast release on October 23 and takes us through the lives of women and men who are dealing with the genetic mutations and their relatedhereditary cancers. It will reveal that men inherit these mutations as often as women and there is a 50% chance of passing this mutation to each offspring regardless if they are male or female. It’s important to point out that if the mutation was passed down to a father and then to his only child which happens to be a son and both are breast cancer free, it doesn’t mean the mutation disappeared. Sometimes it appears that a diagnosis has skipped a couple of generations and people assume there is no family history. It can still be present but just not have presented itself as breast cancer. Remember, not everyone who has the mutation will get a diagnosis.

If a man finds something suspicious, what should he do and who should he see? He should make an appointment with a health care provider who specializes and this referral/recommendation can be made by his primary care practitioner. Men, like women, can get mammograms and other diagnostic screenings. If they do, they should prepare themselves. These environments are aimed at the “feminine” gender, but this shouldn’t be a deterrence because early detection is important.

As a health educator, I feel it’s important to inform individuals about health issues and encourage people to take charge of their health. If this blog provides that to one person, that’s the first seed! Hopefully, the soil will continue to be tilled by others, seeds of information planted and a healthy crop of empowerment will grow and flourish.
One last resource I’d like to share is the John W. Nick Foundation aimed at educating people about the risk of breast cancer in men. There, you’ll see the pink and blue ribbon that was designed in 1996 recognizing that men get breast cancer too. Maybe we’ll soon begin to see both men and women wearing pink and blue to raise awareness. I know that I’ll be promoting this new ribbon in my endeavors in wellness.