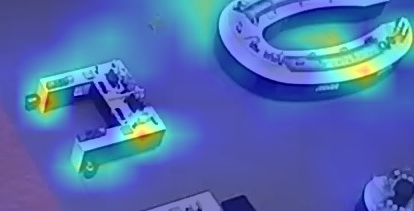 This post will describe how to generate heat maps in CAS by using the DATA step action to calculate 2D histograms and the Image action set for postprocessing. The algorithm in this example is a practical application of one of the use cases presented in a previous post. In that post, we proposed using heat maps as one way to anonymize people being viewed by a security camera.

Extending beyond privacy protection, this example not only uses heat maps as an anonymization tool but also uses them to draw inferences about how an environment is utilized. Specifically, we are identifying heavily trafficked zones. The complete source code is available on GitHub.

Overview of the image processing pipeline

The pipeline can be visualized below:

The motion tracking data for this algorithm was stored in a CSV file. The file has columns for the frame number (embedded in an image file name) and the coordinates of the top-left and bottom-right corners of the tracked objects bounding box. The loadTable action will handle loading the CSV file for us.

We will also want to load the base image at this stage. The dimensions of the base image will be used in later processing to filter out tracked objects that leave the image boundary. We can use the loadImages action for this.

Check out the ‘Load Tracking Data and Base Image’ section of the Jupyter Notebook on GitHub to see how these two actions were used.

The preprocessing was accomplished using a call to the DATA Step action set. The preprocessing is primarily needed to assign a time window ID. This is determined by an interval specified by the user. It also assigns the frame rate in which images were captured. A few other simple preprocessing calculations are made in this first pass of the data. Namely, converting each object’s bounding box coordinates to a centroid coordinate and then filtering out any centroids that leave the image boundary.

The DATA Step action set is again leveraged, but this time it’s used to calculate 2D histograms. There are several important nuances to point out with the histogram calculation:

The 2D histogram calculation illustrated in Figure 2 was implemented using the DATA step shown below.

In the postprocessing, illustrated in Figure 3, we use the condenseImages action to transform a wide table into an image. Then the processImages action is used to prepare the histogram bin values for use as an image before finally resizing the histogram to fit our base image. For visualizing café-utilization we want a spatial heat map with continuously varying magnitude. To accomplish this the resizing step uses bilinear interpolation when transforming the NxNx1 image to the base image size.

The pipeline is shown below. The source code for this section is located in the postprocessing’ section of the Jupyter Notebook previously referenced.

At this stage in the pipeline, we have a table with heat maps corresponding to each window in time the user specified. The annotateImages action, found in the Image action set, can be used to overlay these heat maps on the base image. However, the table of heat maps must be joined with the base image first. We use the fedSQL action set to perform the table-join. Check out the section ‘Overlay the Heat map on Base Image’ on GitHub to see the code for this step. The diagram in Figure 4 illustrates the overlay sequence.

Comparisons were made between a Python implementation (using OpenCV and NumPy for image processing and 2D-histogram calculations) and the CAS version described here. All tests were repeated five times, and the average run times were reported.

For the first test, comparisons were made by holding the 2D histogram resolution constant (at N=13) and varying the size of the heat map time window. In Figure 5 you see a comparison of the basic Python implementation and the CAS version running in both single-machine mode (SMP) and distributed mode (MPP). Figure 6 zooms in only on the CAS version.

Looking at Figure 5, the algorithm runs approximately 5x faster in SMP CAS, and 10x faster in MPP CAS, than in the basic Python implementation. The Python version has a constant run time when varying the heat map time window length because it can leverage the assumption that all observations are in order and can be processed sequentially. The CAS implementation run times vary slightly due to nuances with BY-group processing. That is, when the heat map window length is reduced, there are more windows to be processed, and additional overhead is added.

For a second test, the heat map time window was held constant (at five minutes per heat map) and the resolution of the 2D histogram was swept.

Again, the SMP CAS implementation is approximately 4-5x faster, and when in MPP about 8-10x faster. Just like in the first test, we see the Python version is near-constant in run time when we vary the histogram resolution. This time the constant run time is due to the 2D histogram calculation making use of efficient array data structures with O(1) access times. Conversely, the CAS implementation slightly increases with the resolution because the 2D histogram data is stored in a wide table where accesses are O(n).

Heat maps are a valuable tool whose uses range from simplifying data, like in the case of privacy-protected analytics discussed in a previous post, to the data visualization example which was highlighted in the café-utilization application here. While spatial heat maps were most useful to the café example, many other applications benefit from different types of heat maps, like grid heat maps, and can also be generated by changing the interpolation type in the resizing step of the postprocessing stage.

This heat map generation pipeline illustrates how the DATA Step action set can be used to extend the functionality of the Image action set. In this post, only the condenseImages action of the Image action set was used. But the flattenImages and condenseImages actions can be used together to move images out of and into image formats. This opens the door for any CAS action to be used on image data.

Jordan Leiker’s work within the SAS Computer Vision team lies at the intersection of image processing, machine learning, and computer science. He leverages prior industry experience in embedded signal processing to advance SAS’ image analytics portfolio. His educational background is in digital signal processing. He earned a Bachelor’s degree in Electrical Engineering from Kansas State University and a Master's in Electrical and Computer Engineering from Georgia Tech.