The model management process, which is part of ModelOps, consists of registration, deployment, monitoring and retraining. This post is part of a series examining the model management process, orchestrated through the Model Manager (MM) APIs. The focus of part one is on model registration, specifically on using the APIs from Python to register a Python model into MM. This piece is for users familiar with MM, but not with using the APIs. Subsequent posts cover scoring and monitoring open-source models and integrating with CI/CD pipeline tools.

SAS Model Manager allows for the management of both SAS and open-source models in a single, centralized repository. This is normally achieved through an intuitive graphical user interface (GUI), but for open-source users, a more favorable method is accessing MM through its APIs. APIs, which stands for Application Programming Interface, are a software layer between MM and open-source clients to allow those clients to access the MM functionality.

Why? By using the Model Manager APIs:

As stated above, the API provides the client (in this case, Python) a way to access the MM functionality. For example, if you want to create a new model, instead of clicking “New Model” in the GUI, you could execute the following Python code:

This preceding code represents an API request, where you make a call to the Viya server to interact with a specific resource. With MM, possible resources include models, model projects, repositories, performance definitions and so on. While this post will not detail specific API concepts – understand that as part of the API request you normally provide the following information:

This all brings up the following questions: How to determine what API endpoint to use? What header information to fill out? And what information to send in the body? You may already notice coding all of this with each request gets laborious. So what if these API requests could be simplified?

This is where the sasctl comes in. sasctl is a Python library available on the sassoftware Github page which simplifies making SAS Viya API requests in Python. Using sasctl, the above API request to MM simplifies to:

The user doesn’t have to code any of the required API information other than provide the model metadata they wish to submit. Let's explore where the magic occurs.

Documentation – How do I know what to use?

How do we know what sasctl function to use? Additionally, if you weren’t using sasctl and instead coding from scratch, how do you know what API endpoint to use, or what header information and what metadata to provide? This is where the SAS Viya API documentation comes in and is located on developer.sas.com. 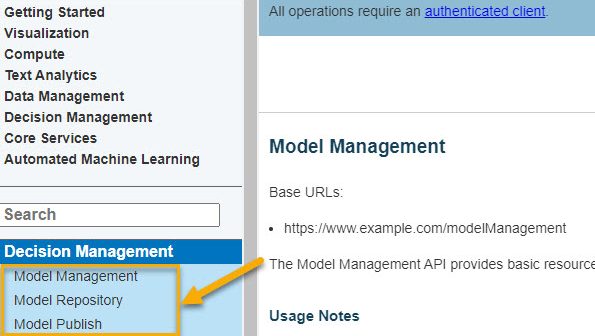 The MM APIs fall under the Decision Management section. There, the MM API functions are grouped according to the various microservices responsible for their operation. Understanding what microservice is responsible for what particular MM functionality tells you which API request to make:

For a more thorough understanding sasctl, refer to the sasctl documentation. You may also want to refer to the Jon Walker's SAS Global Forum paper Manage Model Development via a Python IDE. Just as with the APIs, sasctl functionality is grouped according to the relevant microservices. Since this post covers only registration, we will interact with the modelRepository microservice.

Let’s now cover this process using sasctl rather than coding the APIs from scratch. The step-by-step process is functionally similar to the performed in the GUI – except now with code.

In the GUI, these steps are:

Using sasctl, the steps are:

It’s important to note sasctl has a function called sasctl.register_model(), which performs this entire sequence as a single Python function as a matter of convenience for pure model registration. In an example, let's unpack what’s happening at each individual step of the registration process as an individual API request.

In this example, the model we want to register is a Gradient Boosting model from scikit-learn has already been trained in Jupyter Notebook. This model has several files associated with it:

As part of our model registration, we are going to import these files as model content. Depending on the model complexity and business problem, there might be more files and different types, but these are the files generally associated with a Python model. Below are examples of each file.

In Jupyter Notebook, you can use the built-in %%writefile magic functionality to write cell contents as text files, allowing us to save the training and scoring code as files to import later. Here is how to create the pickle file:

The requirements.txt file is normally written out, but here we create it with Python code:

sasctl has built-in utility functions helping create some of these files automatically as a matter of convenience; however, users may want to create them manually if the model has more complex requirements or more specific customization based on the business problem.

Import sasctl and authenticate to Viya

Now you can start the registration process. In Python, import the sasctl module and the relevant functionality. Next, authenticate Jupyter Notebook with SAS Viya by starting a sasctl session:

The Python variable 's', is the sasctl session object and contains our authentication token for subsequent API requests. If you wish, use s.get_token to retrieve the raw auth token.

To create a model, you first need to create a new model project. To do that, specify a model repository for the new project. This requires retrieving the Universally Unique Identifier (UUID) of the chosen repository using the API. The UUID retrieval code is:

The returned Python variable contains the API response from the request above. The API response contains information about the model repository including the UUID required. If you return the variable as a dictionary, you can see the full API response. 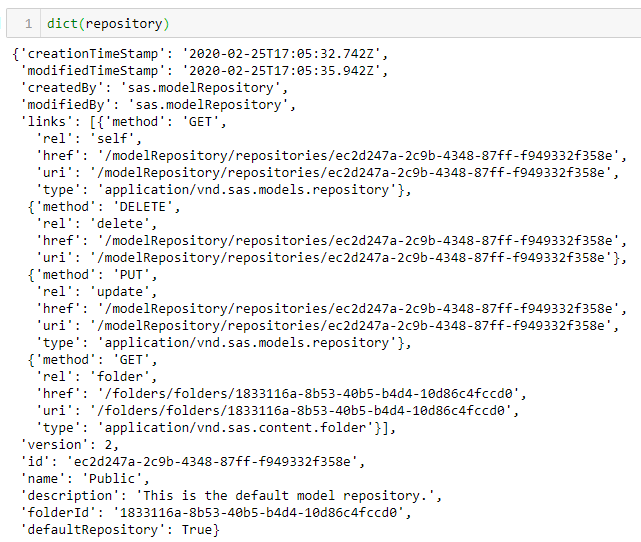 This method of creating the model project follows the same steps performed in the GUI, just with code.

If you want to update any of the model project metadata information, you can interact with the "project" Python variable as if it were a dictionary to make any changes. Then submit the edited variable with another API request:

You can now create a model representation in the model project as follows:

After you create the project, attach the model content to the model, and assign a file role specifying the file type. In this instance, use the Python open() function to read the data and send it through the API:

In Model Manager, you can verify the model project and model creation with the correct metadata and content.

This blog post introduced the concepts behind the Model Manager APIs and how to use them, as well as a step-by-step process for registering a Python model into Model Manager through the APIs.

Thanks for reading! Hopefully you found this blog post helpful in understanding the MM APIs. Remember, this is part one of the series. Look for the next entries which cover: 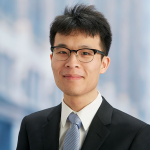 Yi Jian Ching is a Solution Architect at SAS supporting the Asia-Pacific region. Based in Sydney, he advises organizations (across industry) on how to operationalize models at scale. Yi Jian graduated from the University of Sydney with a double major in Physics and Psychology and earned a First Class Honours in Astrophysics.