In 2011, the passage of the federal Justice Reinvestment Act (JRA) brought significant changes to North Carolina’s criminal sentencing practices, particularly in relation to the supervision of offenders released into the community on probation or post-release supervision. A recent New York Times article highlighted how NC has used the implementation of the JRA to implement cost-saving strategies. Each year the NC Sentencing Commission prepares prison projections that are used by the state Department of Public Safety and the NC General Assembly to help determine correctional resource needs for adult offenders, but the changes resulting from the JRA placed a huge kink into the long-established process used to generate those projections. Use of discrete-event simulation software from SAS helped smooth out the kinks.

The NC Sentencing Commission had been using a simulation model written in C-based code to project NC’s prison population for more than twenty years. The changes imposed by the JRA required new functionality not available in the existing simulation. The Administrative Office of the Courts (AOC) ultimately contracted with SAS to develop a more flexible and transparent prison population projection model using discrete-event simulation.

Traditional time series methods are ineffective for prison population projections because of dynamic factors like sentence length, prior criminal history, revocations of community supervision, and legislative changes. As an alternative, the SAS Advanced Analytics and Optimization Services Group (AAOS) used SAS® Simulation Studio to build a discrete-event simulation model that approximates the journeys of offenders through the criminal justice system. In general, discrete-event simulation is used to model systems where the state of the model is dynamic and changes in the state (called events) occur only at countable, distinct points in time. Examples of events in the prison model include an arrival of an offender in prison or a probation violation.

Process flowcharts provided the framework for the Simulation Studio prison projection model (for those interested in more detail, these flowcharts can be found in a more extended paper on this model presented at SAS Global Forum in 2013). Even though most of the JRA provisions went into effect on December 1, 2011, there will be a period of time for which portions of the JRA do not apply to certain offenders. As a result, the new simulation model incorporates both pre-existing and new legislative policies.

The AAOS Group in R&D translated the logic contained in the flowcharts into a Simulation Studio model. The entities (or objects) that flow through the model represent criminal cases. They have attributes (or properties) such as case number, gender, race, age, and prison term. At simulation execution, case entities are generated and routed according to their attributes over a ten-year period. For example, when it is time for a case entity to be released from prison, a check is done to see if that entity qualifies for post-release supervision. If so, then the entity is routed to logic that samples a random number stream to determine whether or not that entity will commit a violation at some point in the future.

The inputs to the Simulation Studio model are in the form of SAS data sets and include the following:

At the end of the simulation, two SAS data sets are generated, providing a complete history of prison admissions and releases over a ten-year time period. From this data, monthly and annual projections can be prepared at an aggregate level as well by variables of interest such as gender, race, age, and offense class.

This project demonstrates a very promising application of discrete-event simulation in practice. The resulting Simulation Studio model not only incorporates changes to correctional policies as a result of the JRA, but it can easily be modified by the Sentencing Commission to incorporate any future legislative acts that affect the prison process, providing the state the flexibility and transparency they desired. The model can also be extended to project other criminal justice populations (such as juveniles) in both NC and in other states. 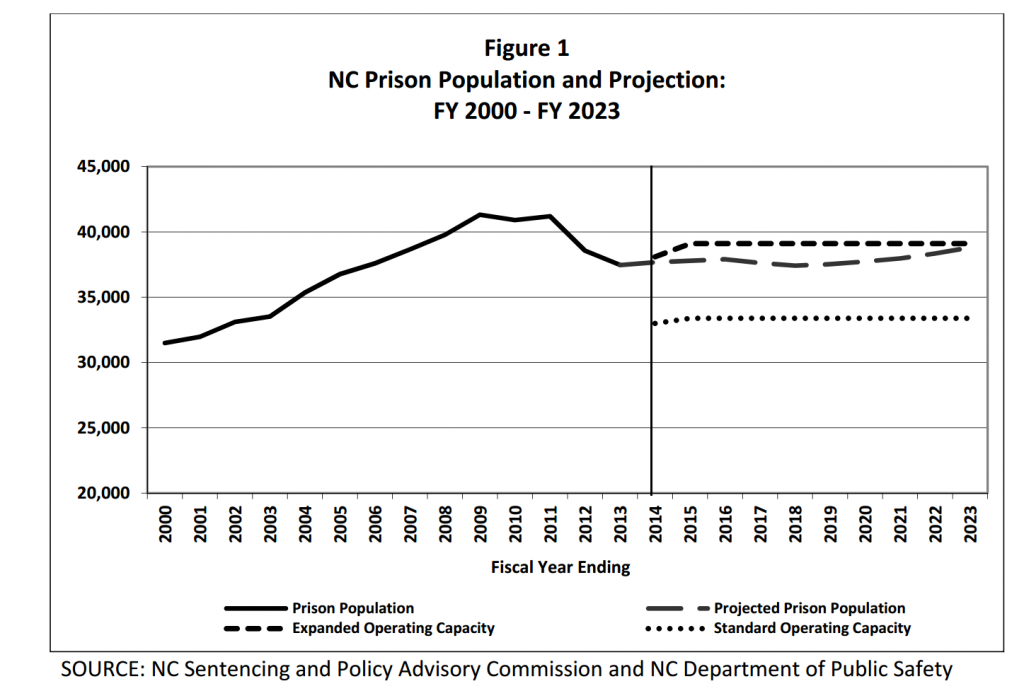