In Part 1 of my series fetch CAS, fetch!, I executed the fetch CAS action to return rows from a CAS table. That was great, but what can you do with the results? Maybe you want to create a visualization that includes the top five cars by MSRP for all Toyota vehicles? How can we accomplish this task? We'll cover this question and provide several other examples in this post.

After executing the code, the results of the action are stored in the variable toyota and not shown in the output.

After executing the code, the result table is saved as a SAS data set. The SAS data set is named top5 and saved to the WORK library.

Wondering what else can we do? Let's take a look.

Now that the result table is saved as a SAS data set, you can use the SGPLOT procedure to create a bar chart! Consider the code below. 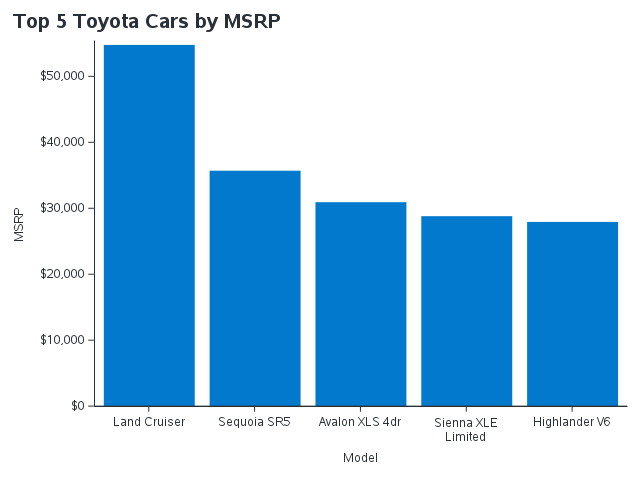 There it is! We processed our data in CAS using the fetch action, returned a smaller subset of results back to the client, then used traditional SAS programming techniques on the smaller table. This method will work similarly in other languages like Python and R. Then you can then use the native visualization packages of the language!

You can now use your imagination on what else to do with the raw data from the CARS table or from the top5 results table we produced with the table.fetch action. Feel free to get creative.

CAS actions are optimized to run in a distributed environment on extremely large tables. Your CAS table can contain millions or even billions of rows. Since the data in CAS can be extremely large, the goal is to process and subset the table on the CAS server, then return a smaller amount of data to the client for additional processing, visualization or modeling.