Firstly, you must be an Administrator in Viya to be able to export and import content. This is currently (as of Viya 3.4) something that cannot be changed. The two main tools you can use for promoting content between Viya Environments are SAS Environment Manager import/export wizards and the sas-admin command-line interface. 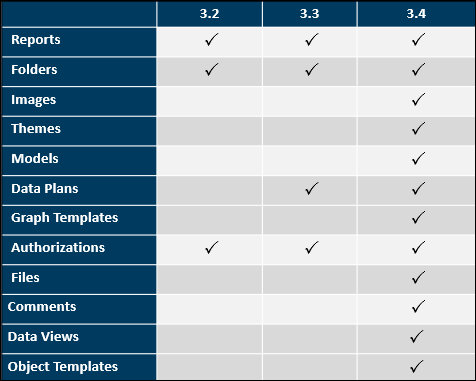 When performing an export/import, the transfer service coordinates the export process and the creation of the package. However, it calls other related services which deal with their specific content. For example, services related to Visual Analytics will deal with reports, and Model Manager with models, etc.

The result of the export process is a Viya promotion package, which is a json file containing a collection of transfer objects describing the content that has been exported. The transfer service's package will include the objects you select for export and the following related platform objects:

There is no mechanism in Viya, like there was in 9.4, to automatically include all dependent objects in a package. To see what is included in a package, let's look at an example. In this example, we will use a Visual Analytics report, but this could apply to any supported content type. 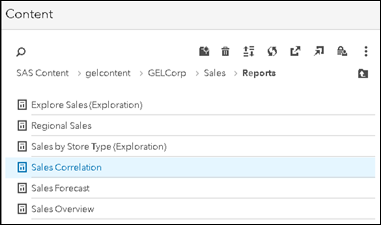 The report “Sales Correlation” is in the folder /gelcontent/GELCorp/Sales/Reports.

In scenario 2, if we select the GELCORP folder and do an export, we will get all sub-folders and content below that folder, including any authorization rules applied directly to those objects. In Viya 3.4, you cannot export the complete folder tree. There is no way in the cli or environment manager to select the root of the folder tree. To export the complete folder tree, you need to export each root folder separately. A tool (exportfoldertree.py) has been added to the pyviyatools that can help with this issue. It will loop the folders and export each root folder to a package in a directory.

Viya content is uniquely identified by its Uniform Resource Identifier (URI). When importing to Viya, objects in the package are matched to objects in the target based on the URI. When matching on URI during an import, if:

The match on URI is an important concept. It can have some results that you might not expect if you don’t understand it. For example, if a report is renamed, a subsequent import may rename the report back based on the name of the report in the package.

In the example below, a report, identified by the uri /reports/reports/c99s5a2-ccb-4552-b1a5-d8b0e3cb1afo, has been moved to a different folder than the same report in the package being imported.

You might expect in this scenario that a new report will be created in the original folder that the report was moved from. However, since the import matches on URI, the location in the folder structure is not relevant. The report is not added to the folder location stored in the package but is overwritten in its new location. The import process will issue a clear warning that this has happened.

Finally, there is some functionality during import that you may be used to in SAS 9.4 that is not available in Viya yet. When importing a package to Viya you cannot:

I hope this helps you gain a better understanding of the features of promotion within SAS Viya and how they work. Here are some related resources that may also help: