As a practitioner of visual analytics, I read the featured blog of ‘Visualizations: Comparing Tableau, SPSS, R, Excel, Matlab, JS, Python, SAS’ last year with great interest. In the post, the blogger Tim Matteson asked the readers to guess which software was used to create his 18 graphs. My buddy, Emily Gao, suggested that I should see how SAS VA does recreating these visualizations. I agreed.

SAS Visual Analytics (VA) is better known for its interactive visual analysis, and it’s also able to create nice visualizations. Users can easily create professional charts and visualizations without SAS coding. So what I am trying to do in this post, is to load the corresponding data to SAS VA environment, and use VA Explorer and Designer to mimic Matteson’s visualizations.

I want to specially thank Robert Allison for his valuable advices during the process of writing this post. Robert Allison is a SAS graph expert, and I learned a lot from his posts. I read his blog on creating 18 amazing graphs using purely SAS code, and I copied most data from his blog when doing these visualization, which saved me a lot time preparing data.

This visualization is created by using two customized bar charts in VA, and putting them together using precision layout so it looks like one chart. The customization of bar charts can be done by using the ‘Custom Graph Builder’ in SAS VA, which includes: set the reverse order for X axis, set the axes direction to horizontal, and don’t show axis label for X axis and Y axis, uncheck the ‘show tick marks’, etc. Comparing with Matteson’s visualization, my version has the tick values on X axis displayed as non-negative numbers, as people generally would expect positive value for the frequency.

Another thing is, I used the custom sort for the category to define the order of the items in the bar chart. This can be done by right click on the category and select ‘Edit Custom Sort…’ to get the desired order. You may also have noticed that the legend is a bit strange for the Neutral response, since it is split into Neutral_1stHalf and Neutral_2ndHalf, which I need to gracefully show the data symmetrically in the visualization in VA. 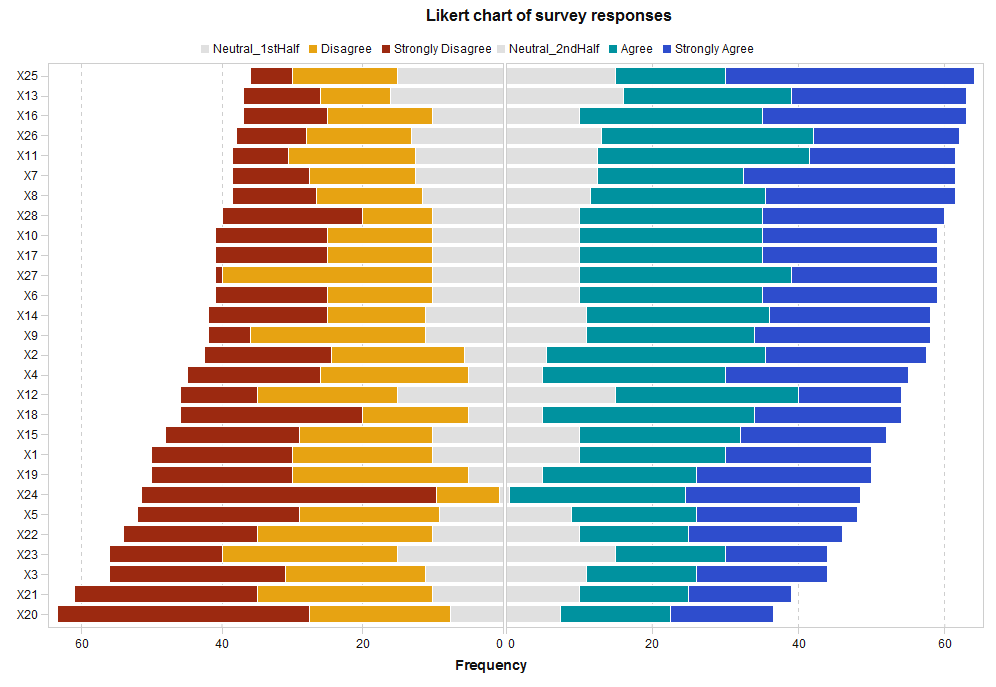 VA can create a grouped bar chart with desired sort order for the countries and the questions easily. However, we can only put the questions texts horizontally atop of each group bar in VA. VA uses vertical section bar instead, with its tooltip to show the whole question text when the mouse is hovered onto it. And we can see the value of each section in bar interactively in VA when hovering the mouse over. 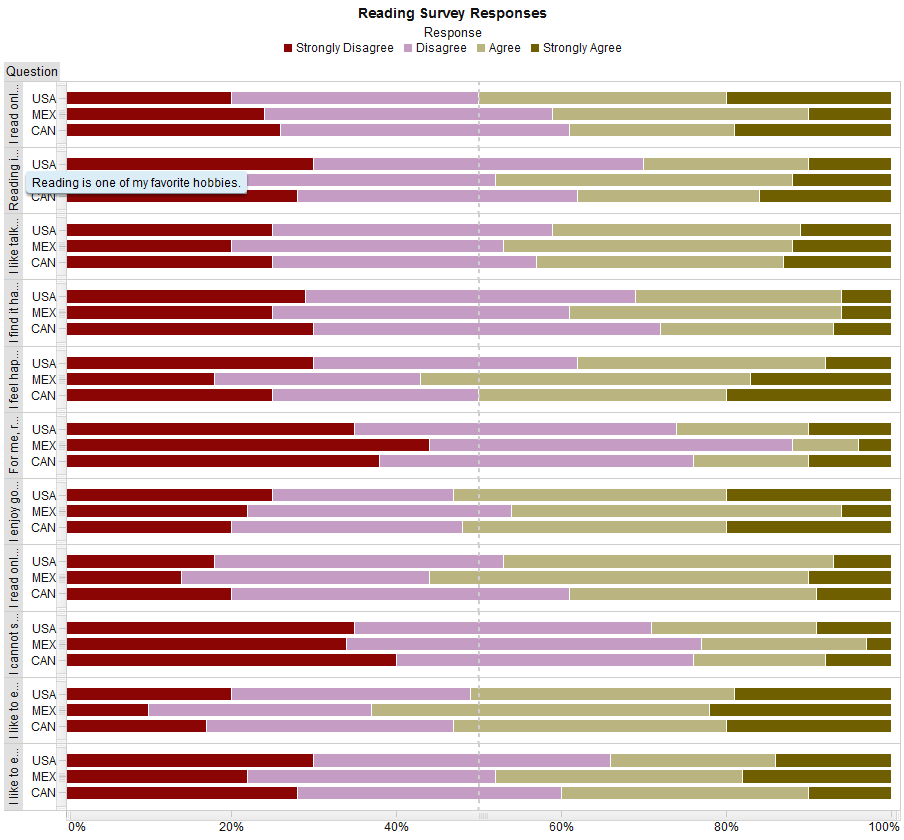 Matteson’s chart looks a bit scattered to me, while Robert’s chart is great at label text and markers for the scatterplot matrix. Here I use VA Explorer to create the scatterplot matrix for the data, which omitted the diagonal cells and its diagonal symmetrical part for easier data analysis purpose. It can then be exported to report, and change the color of data points. 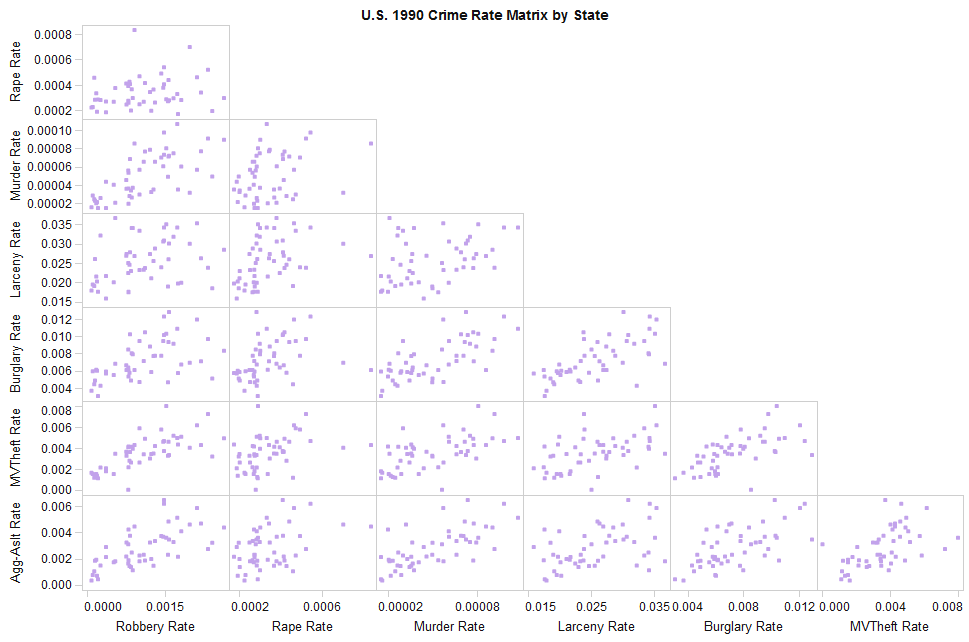 I used the ‘Numeric Series Plot’ to draw this chart of job losses in recession. It was straightforward. I just adjust some setting like checking the ‘Show markers’ in the Properties tab, unchecking the ‘Show label’ in X Axis and unchecking the ‘Use filled markers’, etc. To make refinement of X axis label of different fonts, I need to use the ‘Precision’ layout instead of the default ‘Tile’ layout. Then drag the ‘Text’ object to contain the wanted X axis label. 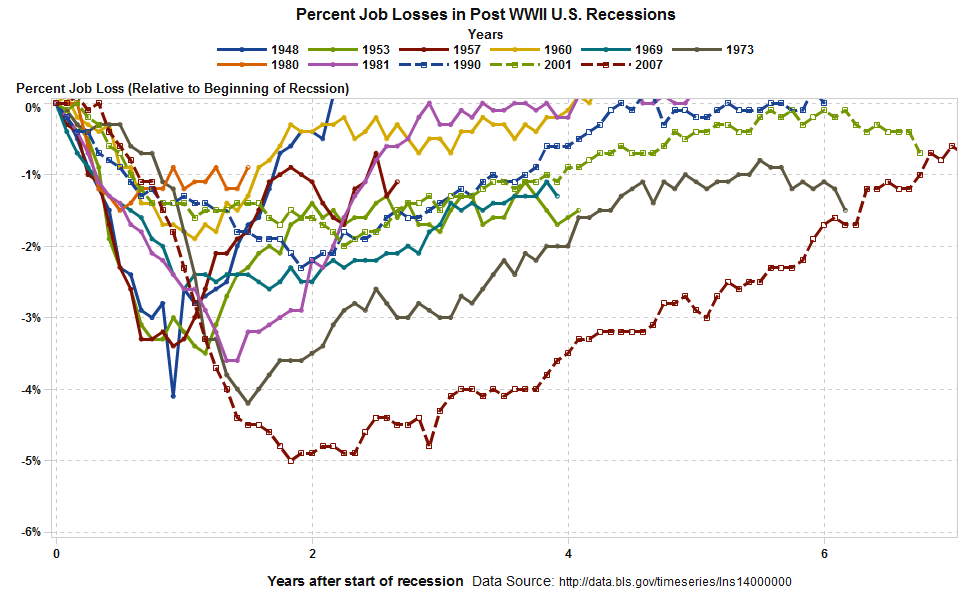 VA can easily draw the grouped bar charts automatically. Disable the X axis label, and set the grey color for the ‘Header background.’ What we need to do here, is to add some display rules for the mapping of color-value. For the formatted text at the bottom, use the ‘Text’ object. (Note: VA puts the Age_range values at the bottom of the chart.) 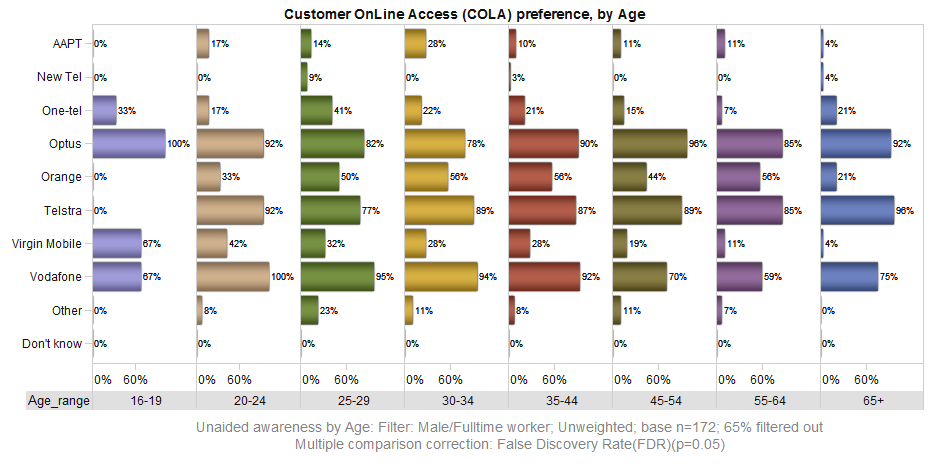 SAS VA does not support drawn 3D charts, so I could not make similar chart as Robert did with SAS codes. What I do for this visualization, is to create a network diagram using the Karate club dataset. The grouped detected communities (0, 1, 2, 3) are showing with different colors. The diagram can be exported as image in VAE.

***I use the following codes to generate the necessary data for the visualization: 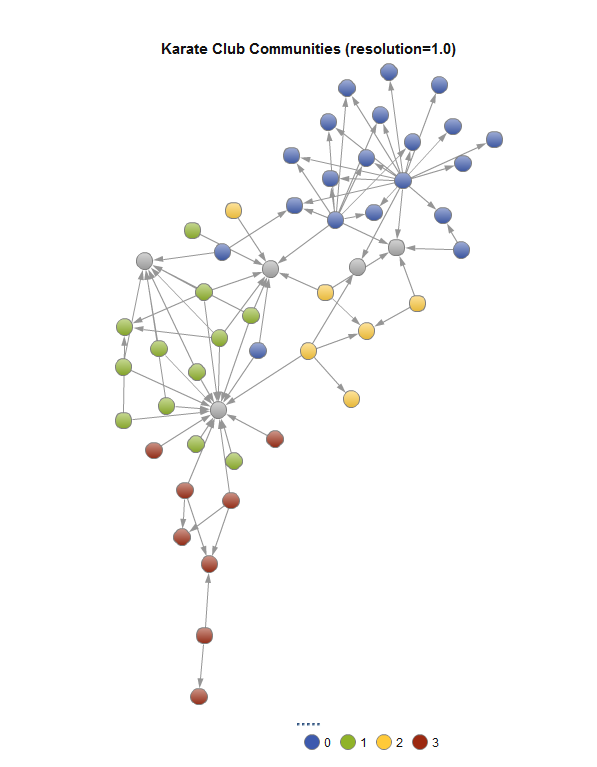 I created this map using the ‘Geo Coordinate Map’ in VA. I need to create a geography variable by right clicking on the ‘World-cities’ and selecting Geography->Custom…->, and set the Latitude to the ‘Unprojected degrees latitude,’ and Longitude to the ‘Unprojected degrees longitude.’ To get the black continents in the map, go to VA preferences, check the ‘Invert application colors’ under the Theme. Remember to set the ‘Marker size’ to 1, and change the first color of markers to black so that it will show in white when application color is inverted. 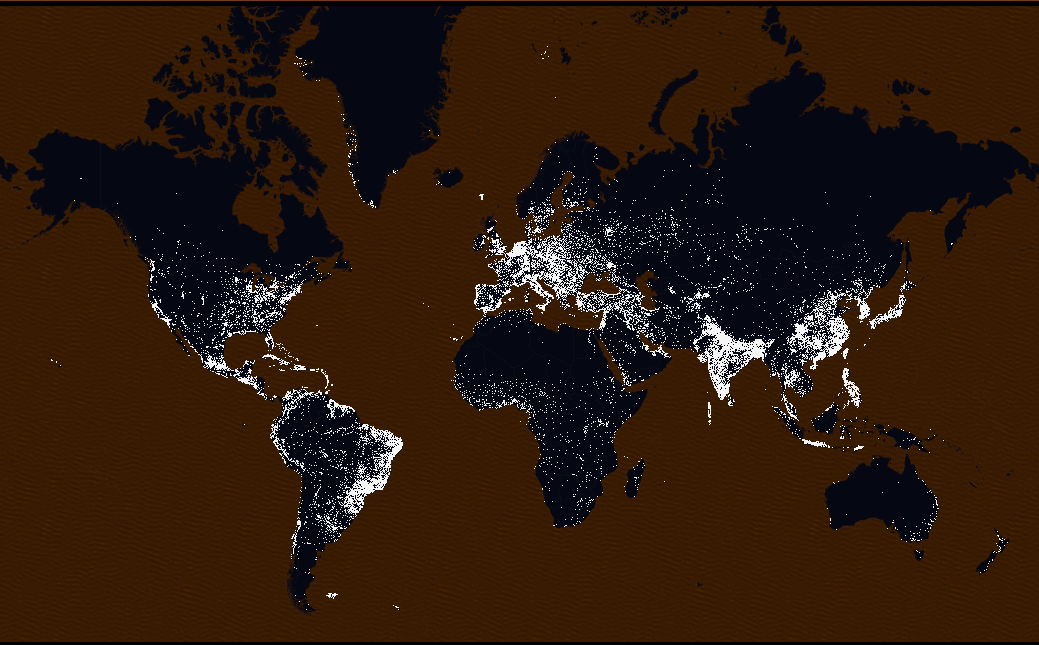 This is a very simple scatter chart in VA. I only set transparency in order to show the overlapping value. The blue text in left-upper corner is using a text object. To get this black background graph, set the ‘Wall background’ color to black. Then change the ‘Line/Marker’ color in data colors section accordingly. I’ve also checked the ‘Show markers’ option and changed the marker size to bigger 6. 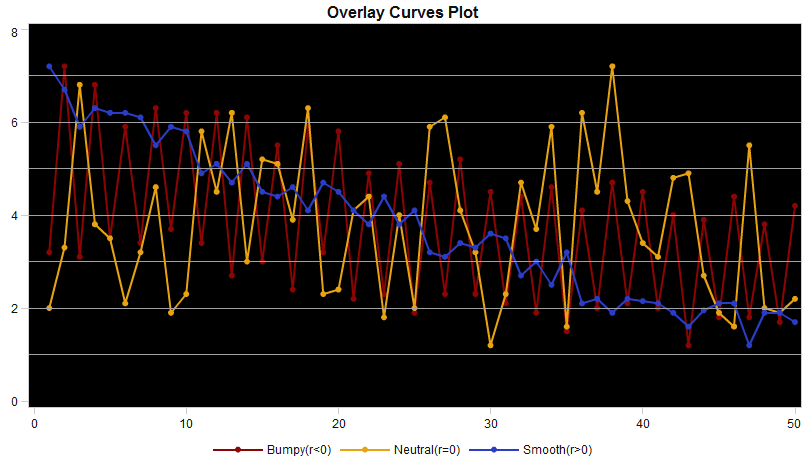 There is nothing special for creating this scatter plot in VA. I simply create several reference lines, and uncheck the ‘Use filled markers’ with smaller marker size. The transparency of the markers is set to 30%. 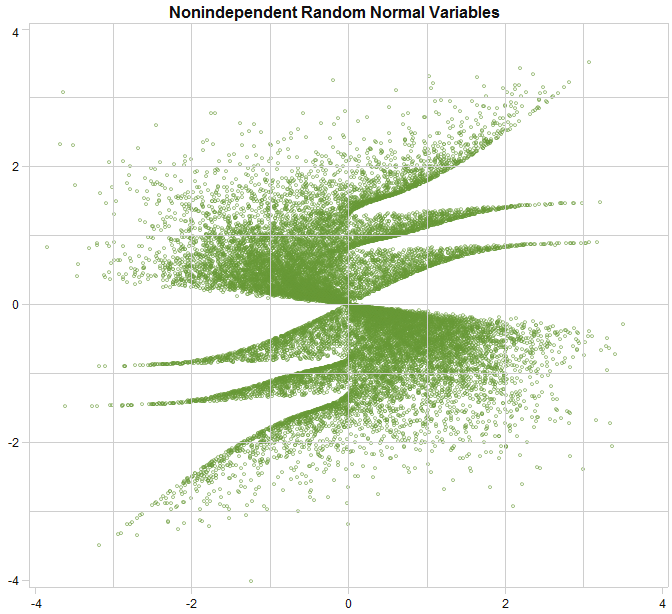 In VA’s current release, if we use a category variable for color, the marker will automatically change to different markers for different colors. So I create a customized scatterplot using VA Custom Graph Builder, to define the marker as always round. Nothing else, just set the transparency to clearly show the overlapping values. As always, we can add an image object in VA with precision layout. 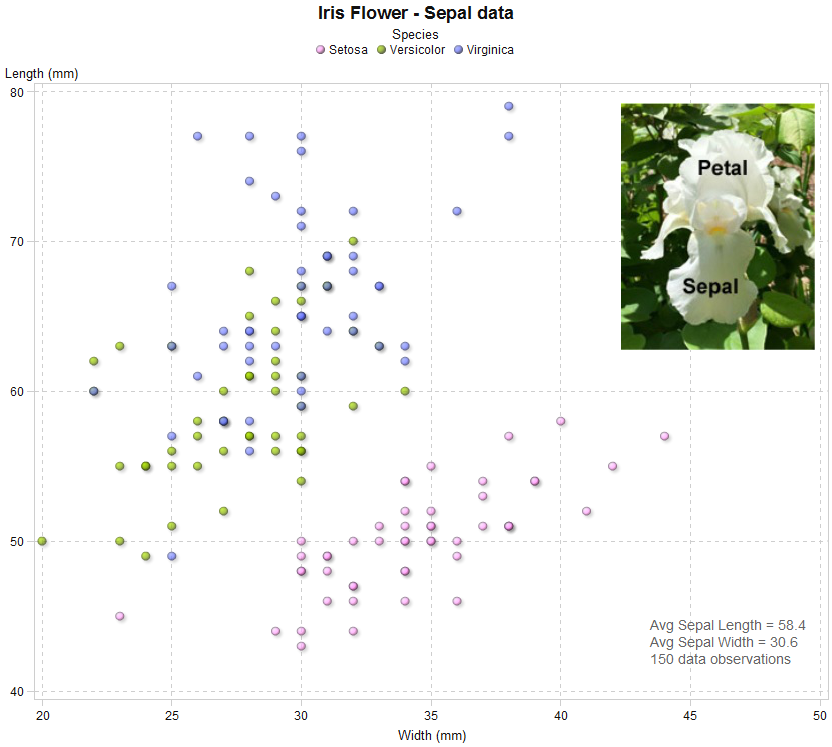 I used the GEO Bubble Map to create this visualization. I needed to create a custom Geography variable from the trap variable using ‘lat_deg’ and ‘lon_deg’ as latitude and longitude respectively. Then rename the NumMosquitos measure to ‘Total Mosquitos’ and use it for bubble size. To show the presence of west nile virus, I use the display rule in VA. I also create an image to show the meaning of the colored icons for display rule. The precision layout is enabled in order to have text and images added for this visualization.

This visualization is also created with GEO bubble map in VA. First I did some data manipulation to make the magnitude squared just for the sake of the bubble size resolution, so it shows contrast in size. Then I create some display rules to show the significance of the earth quakes with different colors, and set the transparency of the bubble to 30% for clarity. I also created an image to show the meaning of the colored icons.

Be aware that some data manipulation is needed for original longitude data. Since the geographic coordinates will use the meridian as reference, if we want to show the data of American in the right part, we need to add 360 to the longitude, whose value is negative. 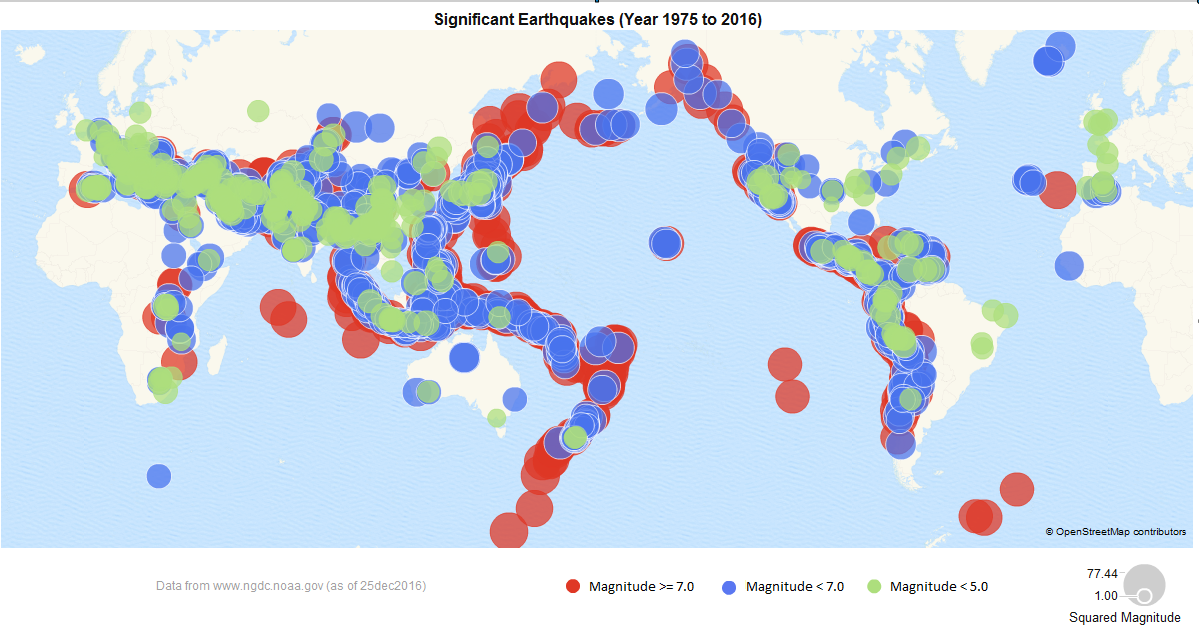 My understanding that one of the key points of this visualization Matteson made, is to show the control/interaction feature. Great thing is, VA has various control objects for interactive analysis. For the upper part in this visualization, I simply put a list table object. The trick here is how to use display rule to mimic the style. Before assigning any data to the list table in VA, I create a display rule with Expression, and at this moment we can specify the column with any measure value in an expression. (Otherwise, you need to define the display rule for each column with some expressions.) Just define ‘Any measure value’ is missing or greater than a value with proper filled color for cell. (VA doesn’t support filling the cell with certain pattern like Robert did for missing value. Therefore, I use grey for missing value to differentiate from 0 with a light color.)

For the lower part, I create a new dataset for interventions to hold the intervention items, and put it in the list control and a list table. The right horizontal bar chart is a target bar chart with the expected duration as the targeted value. The label on each bar shows the actual duration. 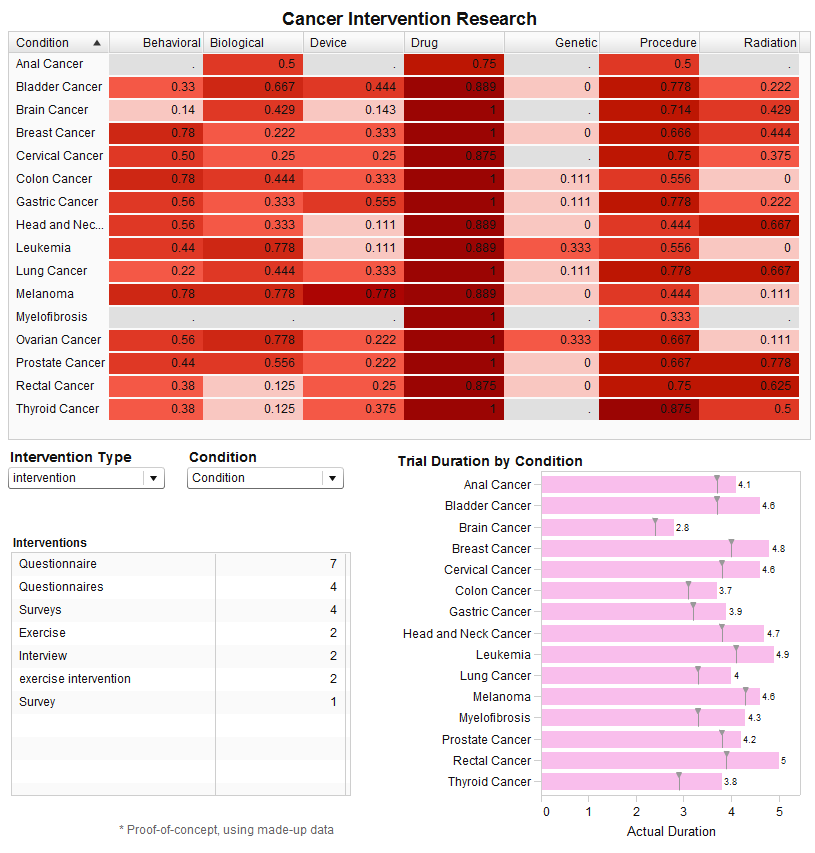 VA does not have solid-modeling animation like Matteson made in his original chart, yet VA has animation support for bubble plots in an interactive mode. So I made this visualization using Robert’s animation dataset, trying to make an imitation of the famous animation by the late Hans Rosling as a memorial. I set the dates for animation by creating the dates variable with the first day in each year (just for simplicity). One customization here is: I use the custom graph builder to add a new role so that it can display the data label in the bubble plot, and set the country name as the bubble label in VA Designer. Certainly, we can always filter the interested countries in VA for further analysis.

VA can’t show only a part of the bubble labels as Robert did using SAS codes. So in order to clearly show the labels of those interested countries, I made a rank of top 20 countries of average populations, and set a filter to show data between year 1950 to 2011. I use a capture screen tool to have the animation saved as a .gif file. Be sure to click the chart to see the animation.

I think Matteson’s original chart is to show the overview axis in the line chart, since I don’t see specialty of the line chart otherwise. So I draw this time series plot with the overview axis enabled in VA using the SASHELP.STOCK dataset. It shows the date on X axis with tick marks splitting to months, which can be zoomed in to day level in VA interactively. The overview axis can do the zooming in and out, as well as movement of the focused period. For this visualization, I use a customized bubble plot (in Custom Graph Builder, add a Data Label Role for Bubble Plot.) so it will have bubble labels displayed. I use one reference line with label of Gross Avg., and 2 reference lines for X and Y axis accordingly, thus it visually creats four quadrants. As usual, add 4 text objects to hold the labels at each corner in the precision layout. 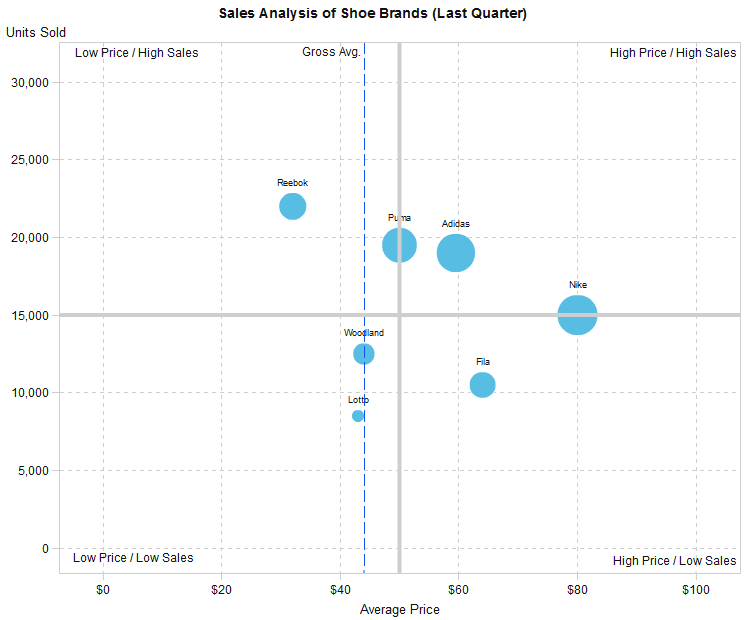 I think Matteson made an impressive 3D chart, and Robert recreated a very beautiful 3D chart with pure SAS codes. But VA does not have any 3D charts. So for this visualization, I simply load the data in VA, and drag them to have a visualization in VAE. Then choose the best fit from the fit line list, and export the visualization to report. Then, add display rules according to the value of Yield. Since VA shows the display rules at information panel, I create an image for colored markers to show them as legend in the visualization and put it in the precision layout. 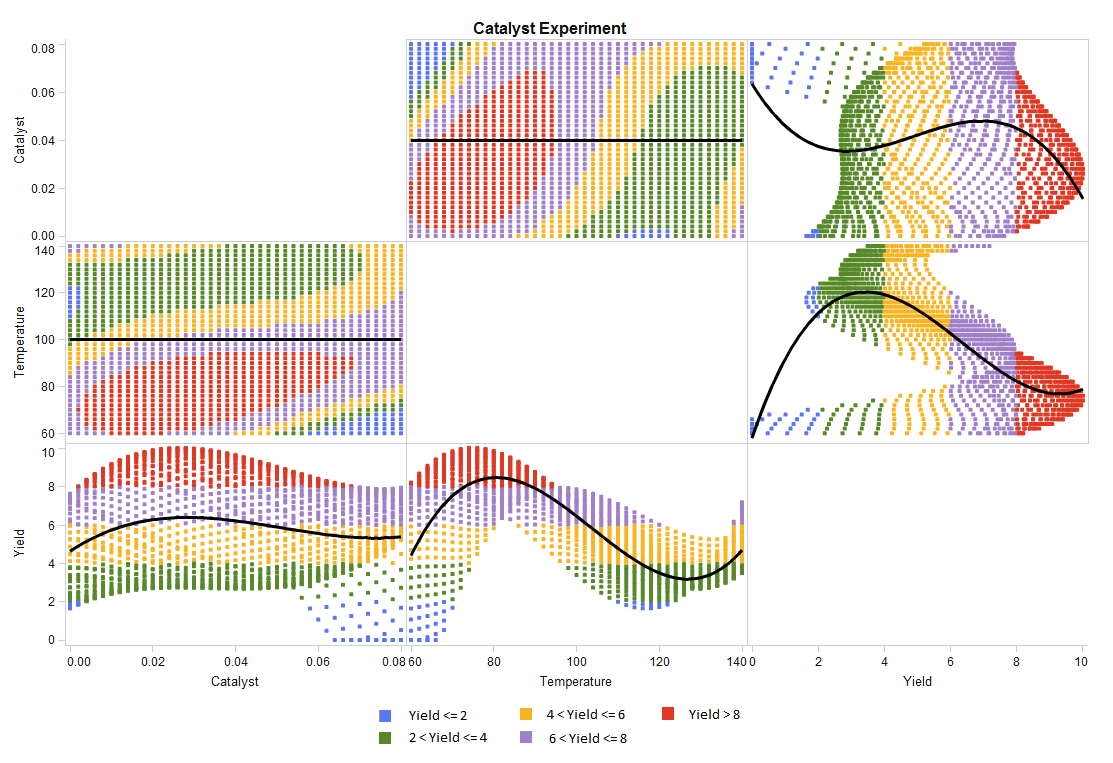 There you have it. Matteson’s 18 visualizations recreated in VA.