For the past few years, I've been hearing from many news sources that Detroit is the most violent large city in the US. If the news is saying this, then the data should corroborate it, eh? Well, of course I decided to check for myself...

When comparing crime data across the country, the FBI's Universal Crime Reporting (UCR) Program is the go-to place for data. The 2017 data hasn't been finalized yet, so I went with the 2016 data. I downloaded the Excel spreadsheet for the entire US. The table looked something like this (notice that the state name in the first row for each state, which makes it a little tricky to work with):

I imported the spreadsheet into SAS using Proc Import, but of course the blank state values also appeared in my SAS dataset as ... you guessed it - blank!

SAS has been tweaking its software for several decades, adding functionality and flexibility, so there's almost no data-problem it can't fix. Here's the code I used to duplicate the state value into each following row that was blank. (Note: I frequently say "There are always at least 10 ways to do a given task in SAS" ... therefore there might be a better way to fix this data. This is just the first way that popped into my head. Feel free to share other/better ways in the comments!)

I limited the data to just the cities with over 100,000 people, and I colored my markers by quartile (25% of the cities are assigned to each of the 4 colors). And to make it easier to quickly identify the worst cities on the map, I drew a circle around the markers for the 5 worst cities. Below is my map (click the image to see the interactive version, with HTML mouse-over text for each city). 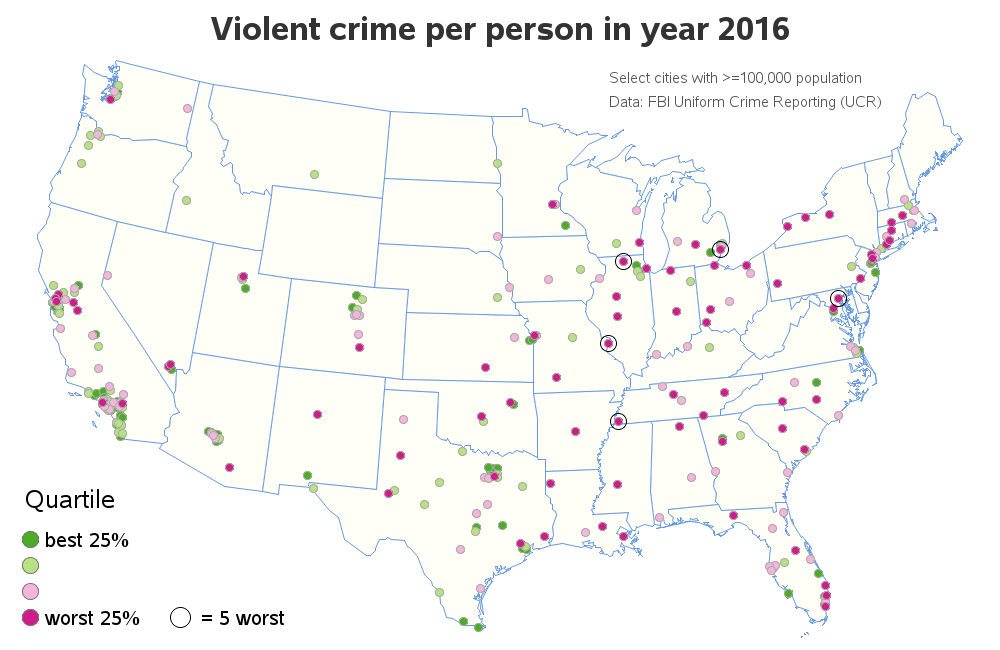 I decided to do a few spot-checks. Here in North Carolina, the city that gets in the news a lot for murders and such is Durham - I wondered how it compared to Detroit. But I couldn't find Durham in the map, or even in the original UCR spreadsheet. My map (zoomed partial screen-capture below) had Charlotte, High Point, Cary, Fayetteville, and Wilmington ... but it didn't show the other NC cities with >=100,000 people (Raleigh, Greensboro, Winston-Salem, Durham, and High Point). 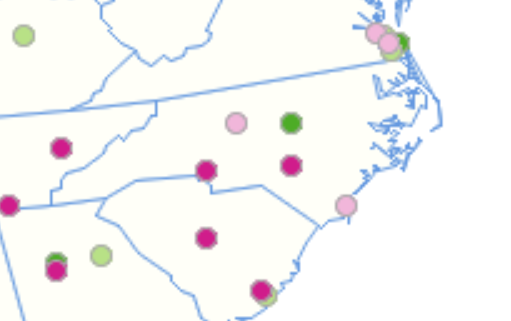 If NC was missing five major cities, how many cities might also be missing in other states? And can you really say Detroit has the highest violent crime rate of any major US city, if the UCR data doesn't include *all* the major cities?

So I categorize this data as interesting, but not conclusive/definitive. What's your opinion?