In the aftermath of a natural disaster, most people want to help by donating supplies, money, etc. And then it becomes a matter of logistics - getting all those donations to the people who need them. We recently had several days of rain and flooding in North Carolina, and I was wondering if I could apply my visualization & mapping skills to possibly help out. Tag along as I show you the map I came up with ...

But before we get to the visualization stuff, here are a few pictures to get you thinking about the floods. In North Carolina, we have mountains, piedmont, and coastal plains. And whenever we have hurricanes or heavy rain for several days, many areas in the coastal plains experience flooding. In the early 1980s we opened Jordan Lake which is used to help control some of the flooding. While I'm writing this blog post, the level is up 10ft above normal - it's buffering a lot of water, but there was still a lot of flooding. 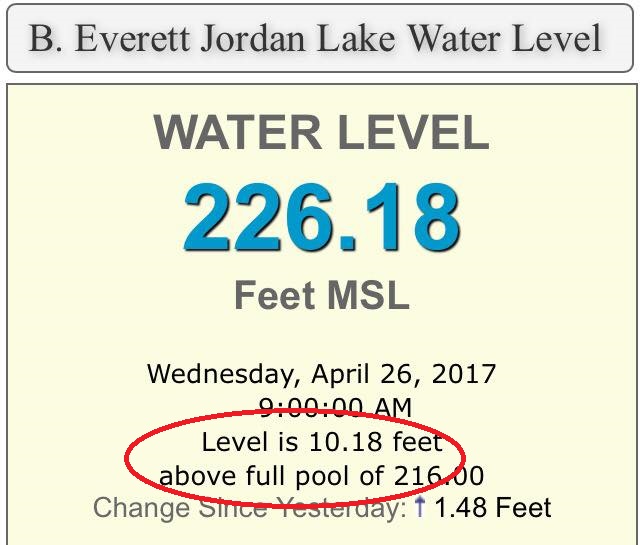 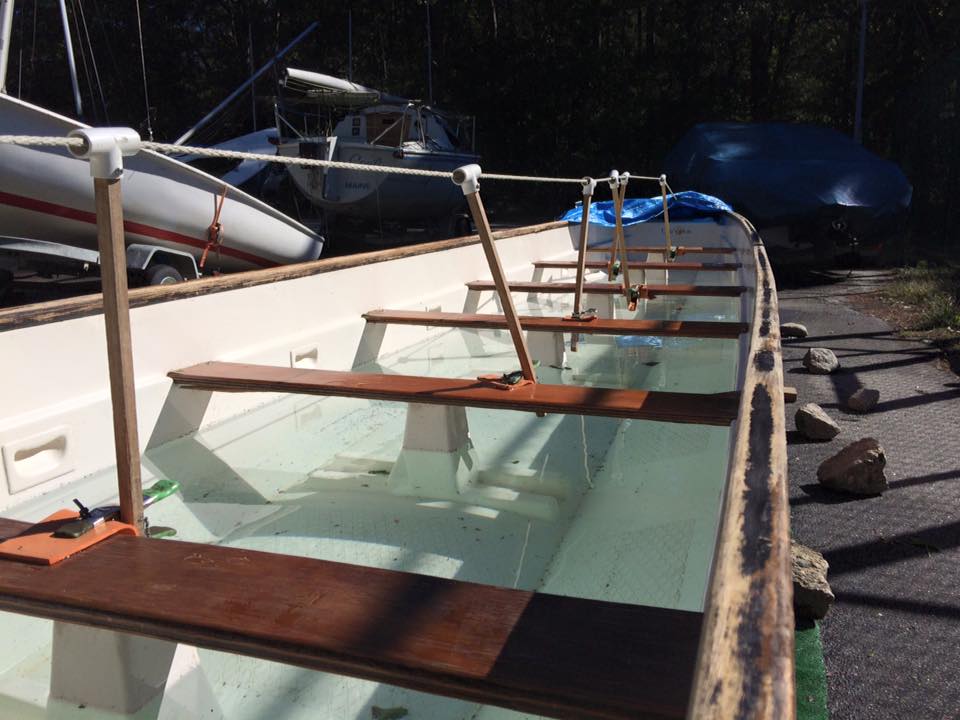 During a flood, many people are displaced from their houses, and lose all their possessions ... such as food. I knew we had some local food banks across our state, but I wasn't sure exactly where they were, and what areas they serviced. A Google search quickly turned up the Food Bank of Central & Eastern North Carolina website. It had a logo showing a map of NC, with the area they service shaded in green (which I've circled in red, in the screen capture below):

They also had a pull-down menu with links for each branch. The branch pages listed all the counties they served, and provided the street address of their distribution center. Here's the info for the Raleigh branch, for example. Can you quickly pinpoint in your "mental map" exactly where the distribution center is located, and the locations of the 13 counties it serves? 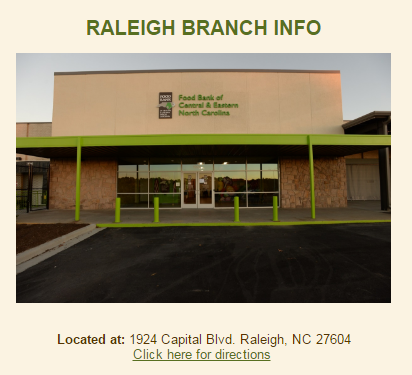 If you have as difficult a time as I do keeping track of the 100 counties in North Carolina, then you're probably thinking the same thing I'm thinking ... it sure would be nice to have a detailed map! So I built a dataset containing a list of all the counties they serve, and which distribution center serves which counties, and plotted that info on a SAS map. One slight 'oddity' - some of the counties are served by both the Greenville and New Bern branches, therefore I used the same color for counties served by either of those. 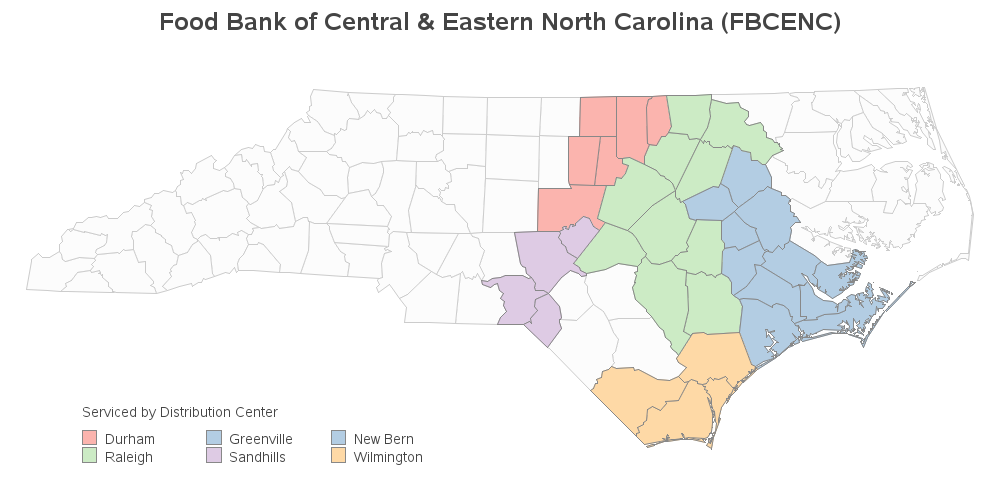 Next, I geocoded the addresses of the distribution centers, and plotted those as bright yellow markers on the map: 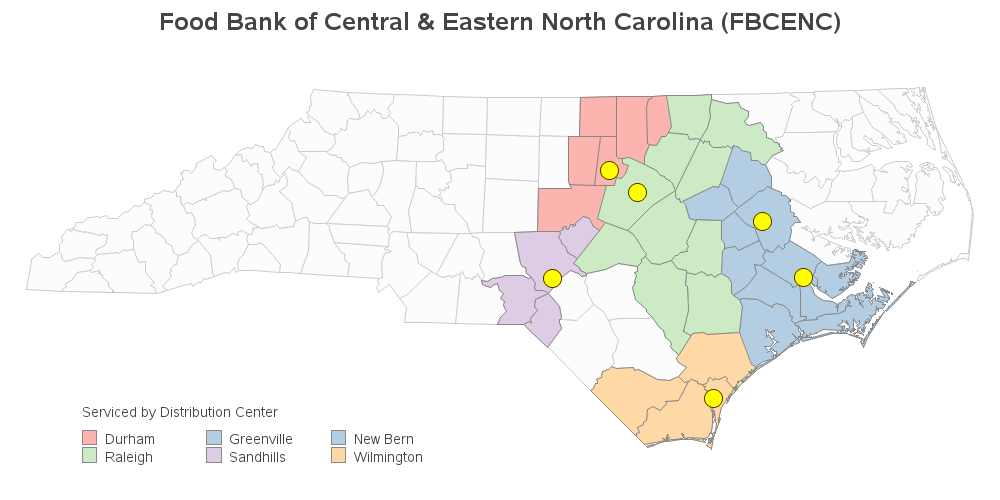 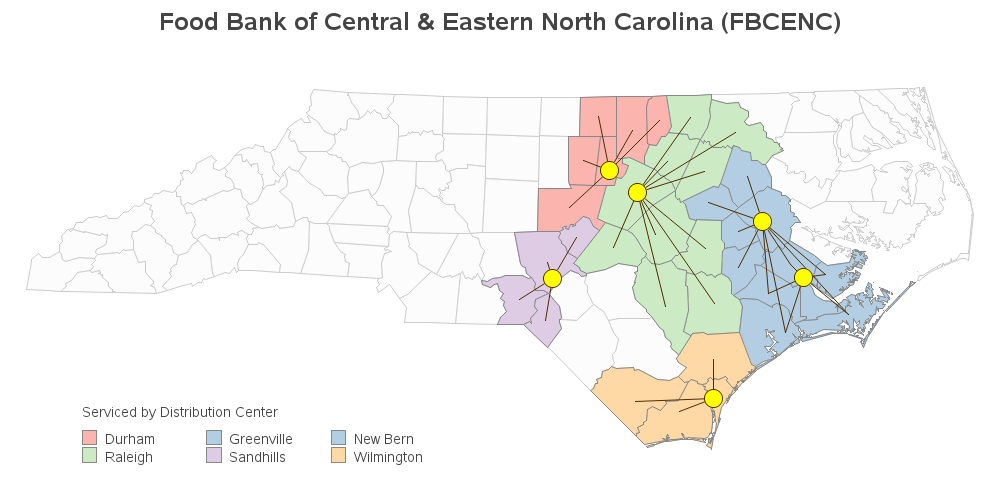 I think it's a pretty nice map, and conveys a lot of useful information! Perhaps people can use it to see which branch to donate to, to help certain counties. Perhaps we can identify counties that are a long distance from a distribution center, and recommend where to open additional centers.