In this blog post I explore some of the open data police incident reports for Raleigh and Cary, while showing you the easy way to handle various types of CSV files.

In recent years, many cities have set up open data websites, to share various kinds of data about their city. I decided to download the Raleigh and Cary police incident reports, and set up some examples that might be a good starting point for others wishing to analyze the open data for their city.

I found the Raleigh, NC open data page for their police incidents, clicked the 'Export' button and downloaded the CSV file. Their data is stored in a very simple/traditional comma-separated-value format, and I was therefore able to use SAS' Proc Import with the traditional dbms=csv:

Similarly, I found the Cary, NC page, and downloaded their data in the csv format. I naively tried the traditional SAS code to import the csv:

But the data came out in (mainly) two big character variables, with multiple fields all globbed together.

Upon further investigation of the cpd-incidents.csv file, I found that the values were separated by semicolons rather than commas. And I thought to myself, "That's not a comma separated value file - what have these people been drinking!?!" But upon further investigation of the definition of a csv file, I found that it has "records divided into fields separated by delimiters (typically a single reserved character such as comma, semicolon, or tab; sometimes the delimiter may include optional spaces)." I guess a semicolon is actually fair game ... so I put on my big-boy pants, and used some slightly different Proc Import code, that allows me to specify the delimiter:

And now the data imports much more cleanly, with each field in a separate variable. Here are a few of the many variables in the data:

You might be asking why I didn't write my own code to read in the data via a filename and a data step? Well, in order to do that, you must determine an appropriate informat to read in each delimited field, and you must hard-code the order of the variables - and if they ever change something in the data file (formats, order of variables, add a variable, etc) then the code where you hard-coded all of those things will no longer work. Using Proc Import will hopefully insulate you from most problems like that.

Now that we've got the data into SAS, what should we do with it? Well, first I did a lot of "looking at" the data, using simple plots, frequency count of unique values, etc. I found that the data is not 100% consistent from year to year - for example, the text descriptions changed over the years, and it appears that for some offenses some of the data might have been tracked in other systems for some of the years. But even with those limitations, I thought it would be fun & interesting to do a few plots of the Driving While Impaired (DWI) data ... since I had accused the people who created the csv file of being drunk a few minutes ago, LOL. 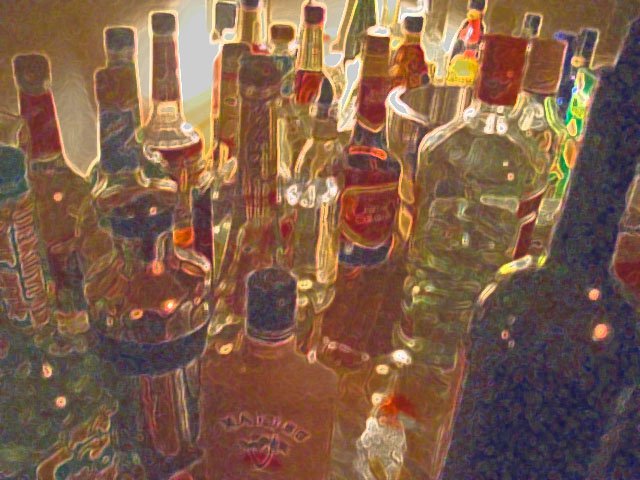 Here's the number of DWI incidents (tracked in the data) for Raleigh & Cary, plotted by year and colored by month. There is a definite spike in Raleigh for the year 2014, which was the result of a special DWI Task Force that year. I'm still waiting for an official reply, but the lower values in the early years of data might be because most DWI incidents were tracked in another system during those years. It's not perfect data, but still interesting! 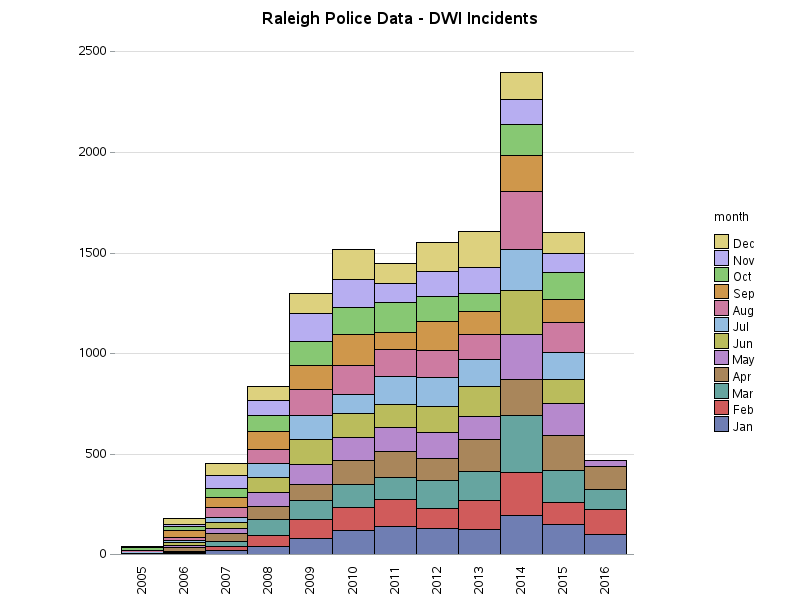 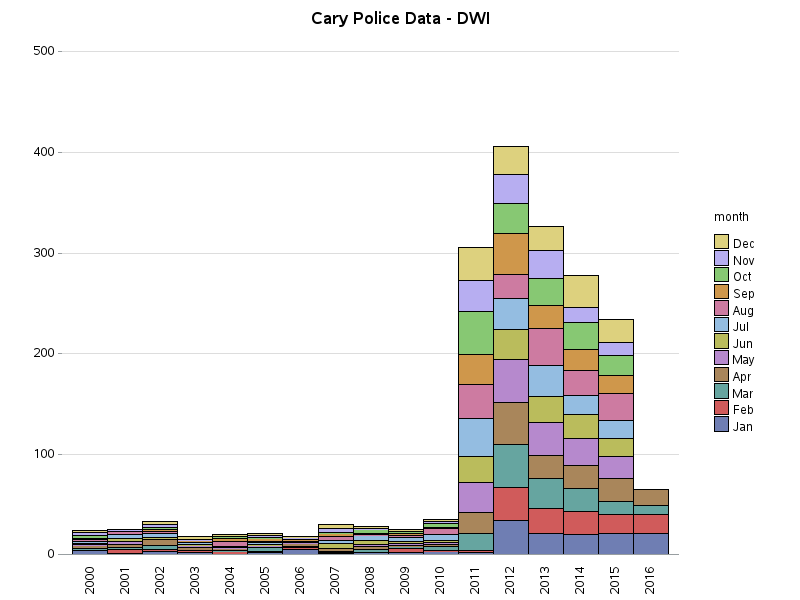 The data also has lat/long coordinates, so I thought it would be interesting to plot it on a map. Since I'm familiar with Raleigh & Cary, I can visually check whether there are more DWIs around the bars, and the areas where I've seen sobriety checkpoints in the past. Looking at the maps, there are definitely some trends and stories in this data. I'm including the 2014 maps below, and you can click these Raleigh and Cary links to see all the DWI graphs and maps. Note that the Cary map is zoomed-in more than the Raleigh map, since Cary is a smaller city. 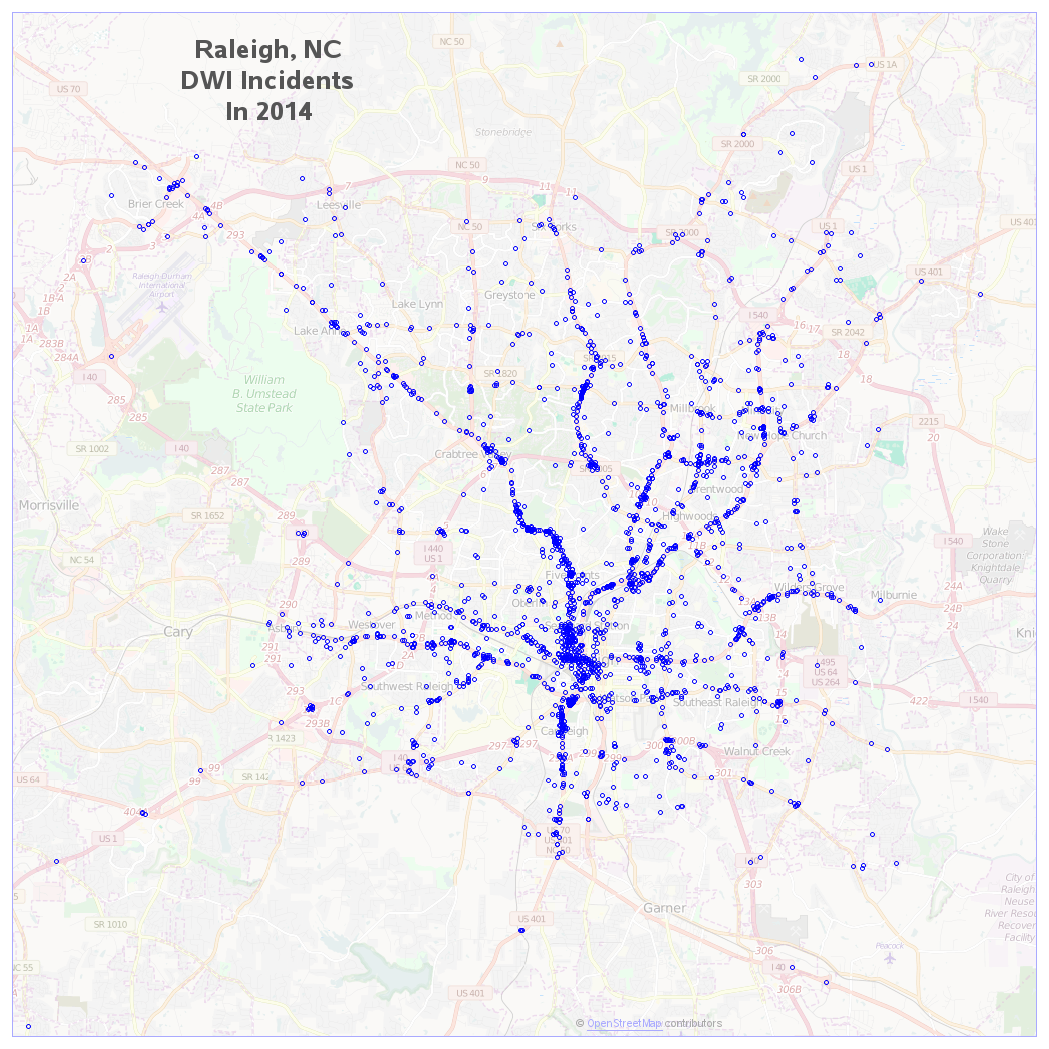 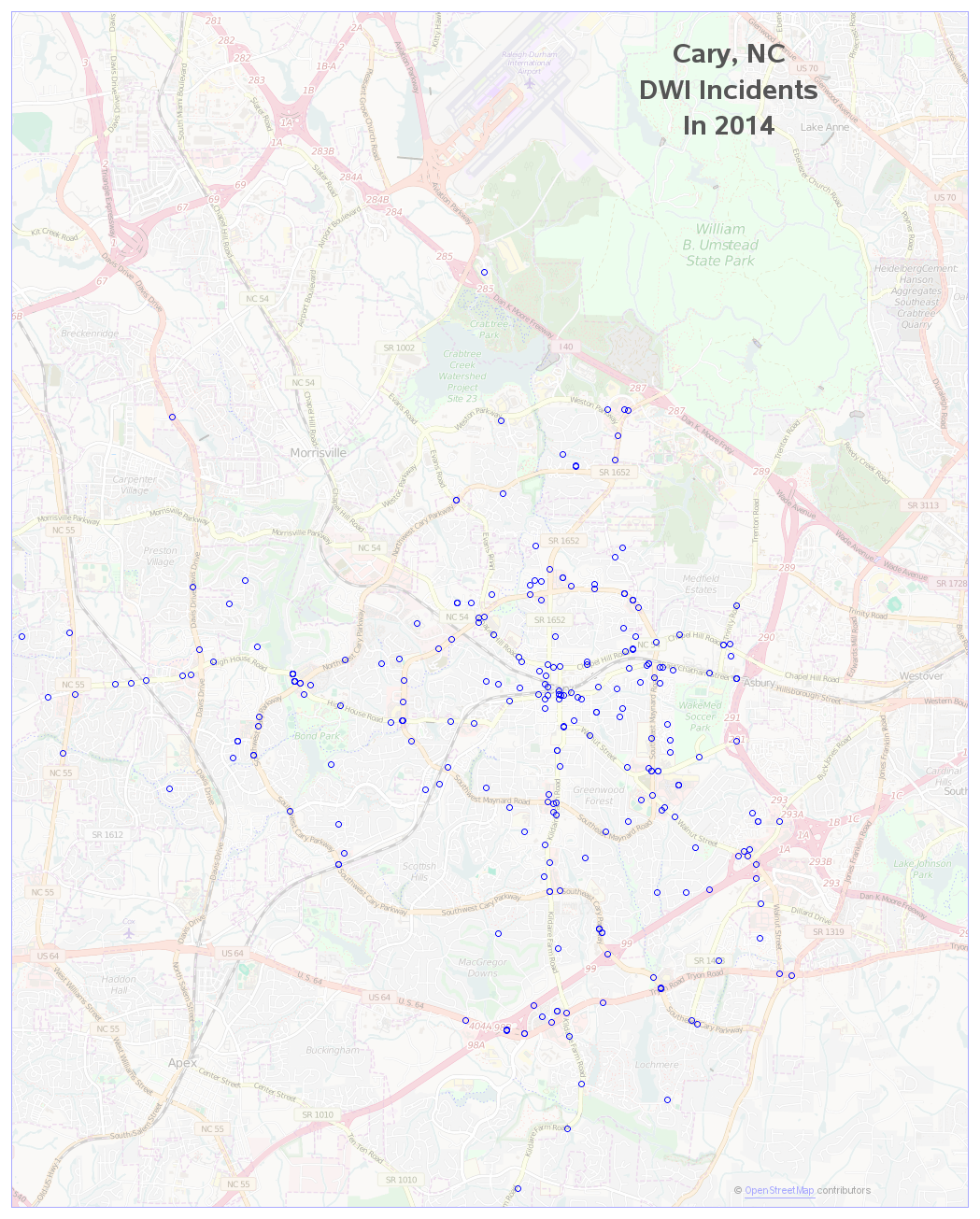 If you'd like to see similar graphs and maps for Motor Vehicle Theft, here are links for my Raleigh and Cary pages showing that data. With these maps, I know which areas not to leave my car parked in! :-)

What other kinds of analytics would you like to perform on the open data Raleigh and Cary have provided? And what other variables or details would you like added to the data, so you can perform even more interesting and useful analyses? (feel free to leave a comment with your ideas!)