This guest blog post comes from Dr. David Dickey, one of our original SAS Press authors. Hope you enjoy!

In the late 1970s, shortly after SAS was founded, I was approached by Herbert Kirk and John  Brocklebank from SAS to put together a course on time series.  This was reasonably successful and shortly thereafter I was asked by Dr. Kirk to coauthor with Dr. Brocklebank a book along the lines of the course, but with some textbook-like explanation.  We did so and thus began our involvement with SAS Publishing. This predated the Books by Users program and we joined just a handful of SAS books like Littell and Freund's SAS® for Linear Models book, which I'd admired as a very readable and informative source.

We got a lot of help from SAS in the writing of the book.  Deborah Blank, in particular, did a great editing job for us. I and some of my colleagues went on to use the book as either a main text or
additional reference for the NCSU Applied Time Series course which has been quite popular over the years.

One day I received a set of galley proofs from a book review I had done for one of our well-regarded journals. On the page above my review was the tail end of a review of another book. Its last sentence caught my attention. It said something like "I can recommend this book but if you want to know how to apply time series methods in practice, read Brocklebank and Dickey."  Of course I was pleased.

Another incident that comes to mind is teaching the course on which the book was based, in Oakland, California in 1989. I had just returned to my hotel room and was on the phone with my wife when I felt the building swaying! This was, of course, the earthquake during the San Francisco - Oakland World Series.  In fact, my son had just yelled to my wife that the series broadcast had suddenly gone dead.

Yet another SAS adventure (but 'no thanks' on an offer to replicate the experience). 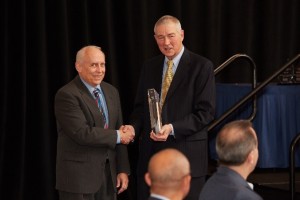