Teacher pay, and the possibility of a raise, has been a hot topic in North Carolina lately.  So I decided to look around and see if I could find any good data related to teacher salary, and then try to determine the best way to present that data graphically.

I found that the National Center for Education Statistics (NCES) had some salary data available in a convenient (spreadsheet) format – it contained the average salary, by state, with a snapshot every 10 years for the past few decades. They also used the consumer price index to convert the salaries into 2012/13 dollars, so the old salaries could be easily compared to the current salaries.

First, I looked around on the Web to get some ideas for presenting this type of data, and I found this bar chart (see screen-capture below). Notice that South Dakota’s average starting salary appears to be almost nothing compared to California’s!  But I’m sure that you (my sharp-eyed blog readers) quickly noticed that the height axis does not start at zero, which is a big no-no for bar charts, and makes it impossible to proportionally compare the bar heights. 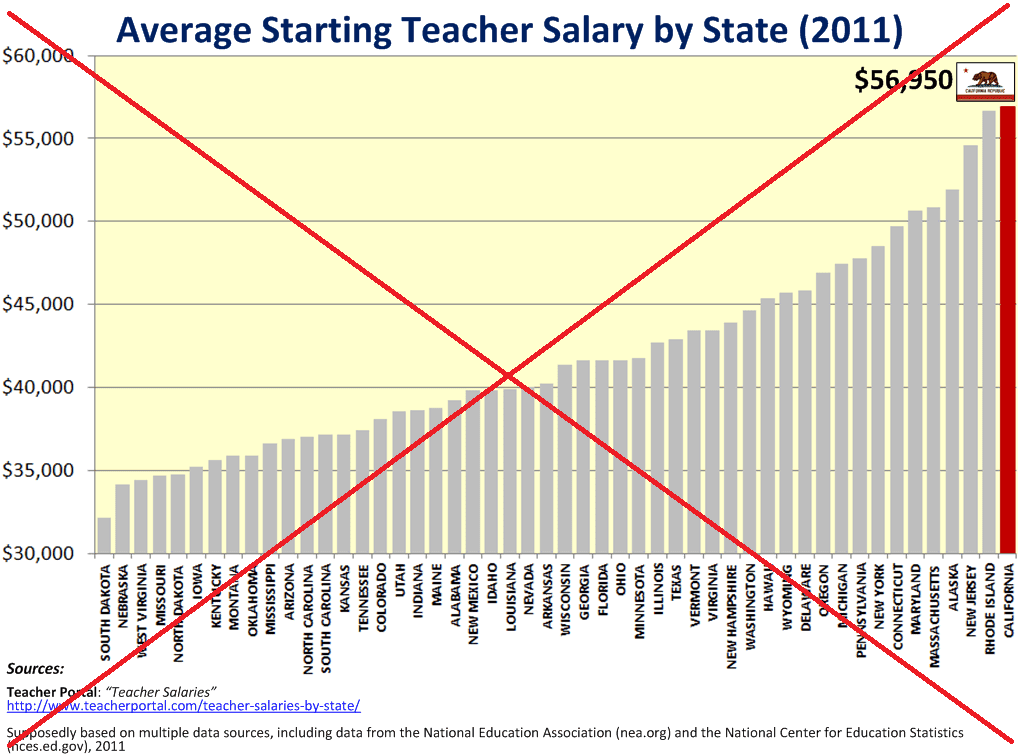 So, learning from the deficiencies of that bar chart, I decided to create mine with the height axis starting at zero, and also using horizontal bars so the state names are easier to read. It appears that North Carolina is 4th from the bottom - how did your state compare? (You can click on the snapshot below, to see the web version with html hover-text.) 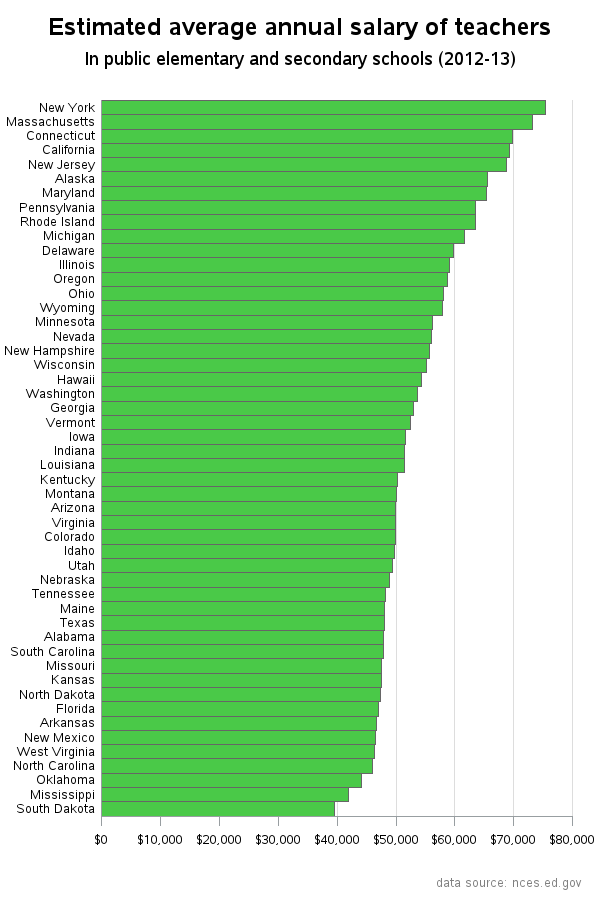 I don’t have any cost-of-living data to help make a fair comparison between states, but I thought the next best thing would be to plot the data on a map. I assumed that most of North Carolina’s neighboring states would have a similar cost-of-living, and therefore we could visually compare NC’s salary to its neighbors on a map. I use ‘quintile’ binning so that the states are divided into 5 groups, and North Carolina is in lowest/worst quintile (reddish-pink), whereas none of NC's bordering states are not in that worst quintile. How does your state compare to its neighbors? 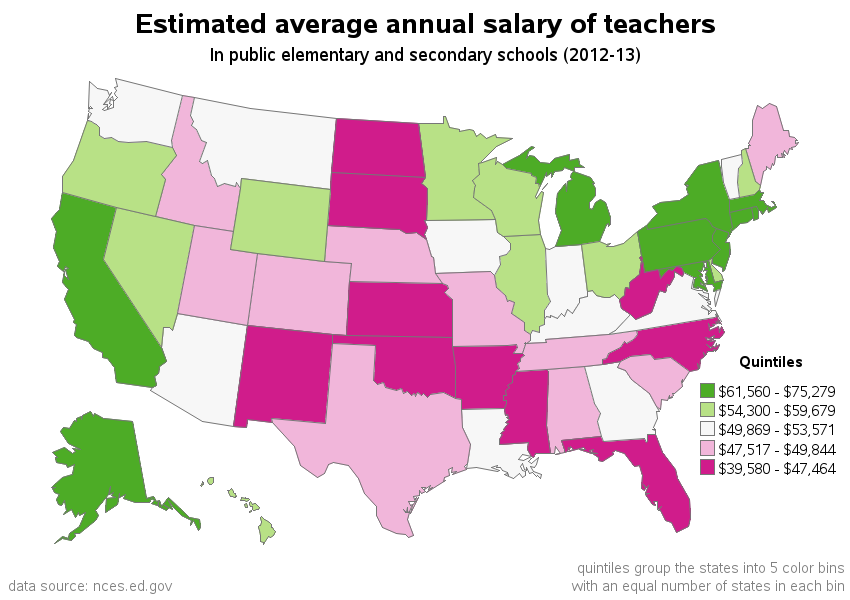 The previous graphs only show the most recent data, but the NCES also provided historical data every 10 years. A natural way to plot this data would be a time series plot, with the x-axis representing time. I first plot the data using a boxplot, which tells a lot about the data for those who know how to read it. 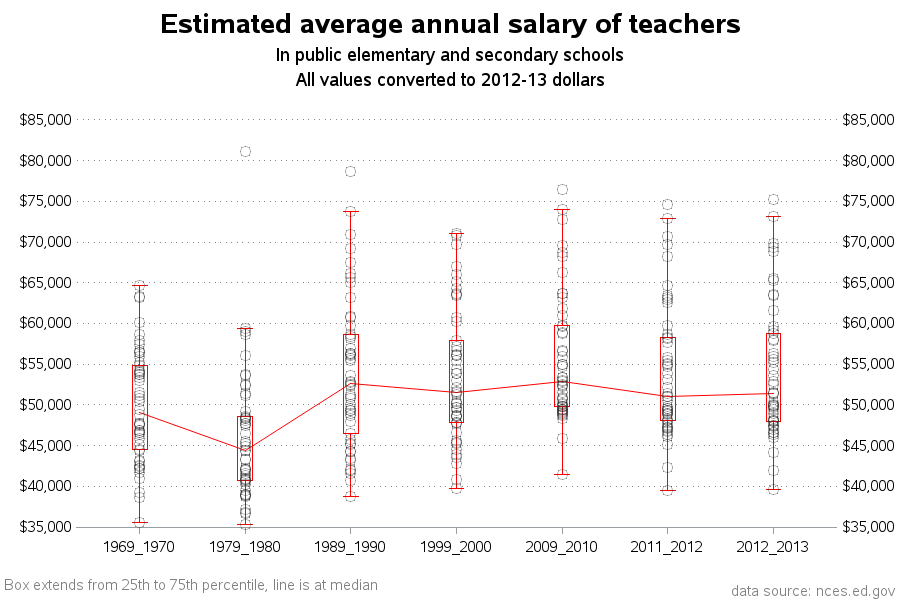 But perhaps the previous plot is not all that meaningful to people not familiar with boxplots. Therefore, I also plot the data with a simple line plot (with a separate line for each state). The line plot is a bit cluttered, but it lets you look for general trends. Also, if you color one state's line red, you can easily compare it to the rest of the states. It definitely appears that NC's line (red) has gone down significantly in the past few years, compared to the other states. (When you click the thumbnail below, scroll down to see several variations of line charts.) 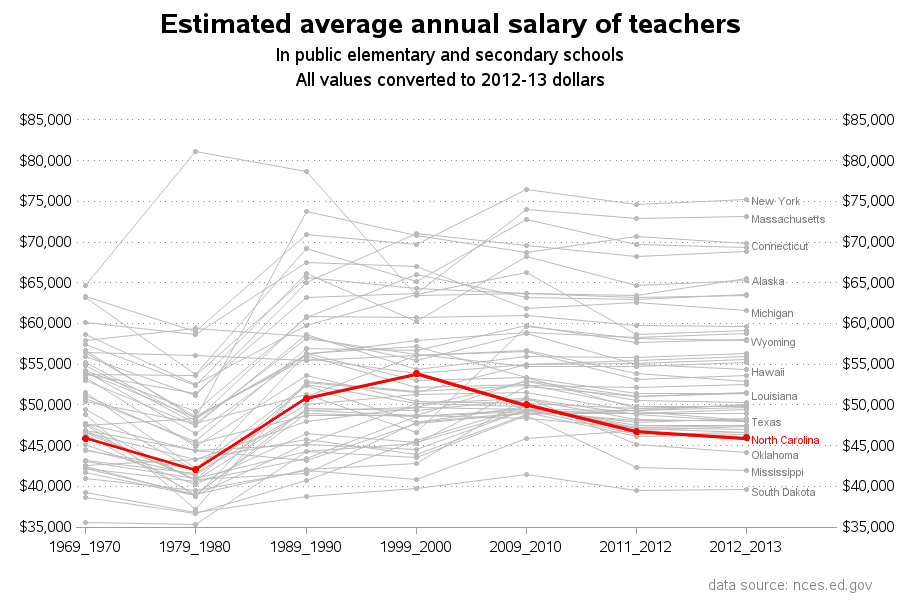 I welcome discussion and comments … Do you have any suggestions on better ways to present this data? Do you know of other data available, that might be good to combine with this data? What other factors need to be taken into consideration when comparing salaries? (cost-of-living? subsidies? number of days per year spent working? benefits such as health insurance and pensions? average tenure of teachers? others?)