One of the big benefits of SAS Viya is how approachable it is for programmers of other languages. You don't have to learn SAS in order to become productive quickly. We've seen a lot of interest from people who code in Python, maybe because that language has become known for its application in machine learning. SAS has a new product called SAS Visual Data Mining and Machine Learning. And these days, you can't offer such a product without also offering something special to those Python enthusiasts.

And so, SAS has published the Python SWAT project (where "SWAT" stands for the SAS scripting wrapper for analytical transfer. The project is a Python code library that SAS released using an open source model. That means that you can download it for free, make changes locally, and even contribute those changes back to the community (as some developers have already done!). You'll find it at github.com/sassoftware/python-swat.

SAS developer Kevin Smith is the main contributor on Python SWAT, and he's a big fan of Python. He's also an expert in SAS and in many programming languages. If you're a SAS user, you probably run Kevin's code every day; he was an original developer on the SAS Output Delivery System (ODS). Now he's a member of the cloud analytics team in SAS R&D. (He's also the author of more than a few conference papers and SAS books.)

Kevin enjoys the dynamic, fluid style that a scripting language like Python affords - versus the more formal "code-compile-build-execute" model of a compiled language. Watch this video (about 14 minutes) in which Kevin talks about what he likes in Python, and shows off how Python SWAT can drive SAS' machine learning capabilities.

The analytics engine behind SAS Viya is called CAS, or SAS Cloud Analytic Services. You'll want to learn that term, because "CAS" is used throughout the SAS documentation and APIs. And while CAS might be new to you, the Python approach to CAS should feel very familiar for users of Python libraries, especially users of pandas, the Python Data Analysis Library.

CAS and SAS' Python SWAT extends these concepts to provide intuitive, high-performance analytics from SAS Viya in your favorite Python environment, whether that's a Jupyter notebook or a simple console. Watch the video to see Kevin's demo and discussion about how to get started. You'll learn: 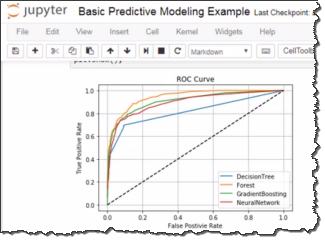 Want to get your hands on this? With just a couple of clicks, you can sign into the SAS Viya Developer Free Trial. You sign in with your SAS.com profile (the same one you use in SAS Support Communities or to access SAS e-learning). The trial environment lets you test-drive SAS Viya using Python or R in a Jupyter notebook, or with SAS programming using SAS Studio. When you sign up and click through to the trial, you'll have your own session that you can use for the next 8 hours -- plenty of time to kick the tires.

The trial environment includes all of the sample data and code that you need to get a feel for what it's like to code with CAS. You can find all of the API reference documentation at the SAS for Developers site. SAS developer Jared Dean narrates this great demo/tutorial that you can watch or follow along with during your experience.

There are plenty of helpful resources to help you learn about using Python with SAS Viya:

And finally, what if you don't have SAS Viya yet, but you're interested in using Python with SAS 9.4? Check out the SASPy project, which allows you to access your traditional SAS features from a Jupyter notebook or Python console. It's another popular open source project from SAS R&D.